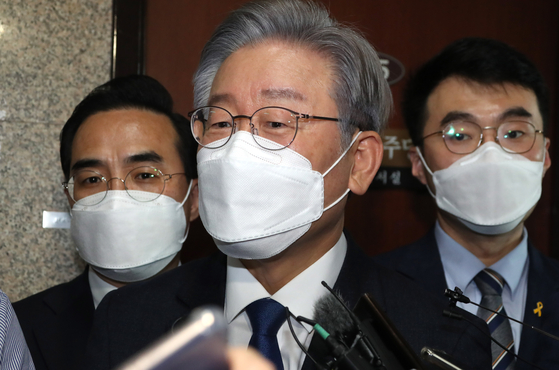 
President Moon Jae-in on Tuesday ordered law enforcement to thoroughly investigate a snowballing corruption scandal about a development project in Seongnam, just south of Seoul, as prosecutors requested an arrest warrant for a key figure in the politically charged case.

Prosecutors on Tuesday sought an arrest warrant for Kim Man-bae, the owner of small asset management company Hwacheon Daeyu, on charges of breach of trust, bribery and embezzlement in connection with the colossal profits raked in by his company from the 2015 Daejang-dong development project in Seongnam, Gyeonggi.

Kim, a former journalist, and his company first attracted attention by reaping a profit of 57.7 billion won ($48.3 million) on an investment of 49.95 million won, which was a 1 percent stake in the project. The company also made 300 billion won in sales of apartments in the development, while its Cheonhwa Dongin affiliates reaped in an additional 400 billion won in profits.

The fact that Kim had interviewed the ruling Democratic Party (DP) presidential candidate and Gyeonggi Governor Lee Jae-myung in 2014, when he was the mayor of Seongnam, aroused suspicion that his company had benefited from political favors in the city’s project.

In a sign of how seriously the scandal is being taken by the government, Moon on Tuesday made his first comments on it by instructing the state prosecution service and police to “actively cooperate and do their utmost to uncover the truth through a swift and thorough investigation.”

Kim is suspected of enlisting the help of Yoo Dong-gyu, former acting president of the Seongnam Development Corporation -- which held a 50 percent stake in the mixed private-public development consortium -- to wrangle a profit distribution scheme favorable to Hwacheon Daeyu in the development in return for large payouts to people who helped with the set-up. 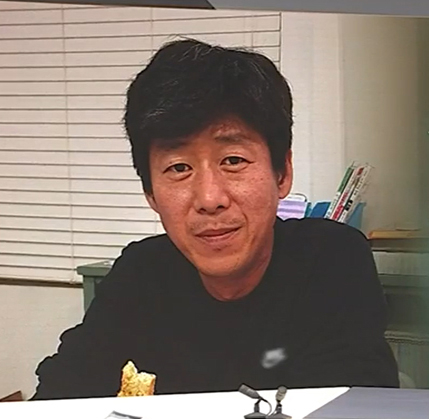 In a phone interview with JTBC on Tuesday evening, Nam Wook – a lawyer and another key figure in the scandal – said that Kim promised 5 billion won to seven people who helped design the shareholder composition and profit distribution scheme favorable to his company.

Nam, who is currently in the United States, was threatened with the cancellation of his passport by the Foreign Ministry if he did not return to the country to face questioning. Nam has denied that he fled the country because of the scandal and promised to cooperate with investigators.

Prosecutors alleged in their Tuesday arrest warrant filing that Kim caused 110 billion won ($92 million) of losses to Seongnam by engineering a contract with Yoo that did not include a clause limiting the amount of profits that the firm could take from the project.

Yoo was arrested on Oct. 3 on charges of committing breach of trust and bribery.

The fact that both Kim and Yoo are acquantainces of Lee – Yoo worked on Lee’s mayoral and gubernatorial campaigns – have led to calls from the main opposition People Power Party (PPP) for the Gyeonggi governor to abandon his presidential run.

The PPP has also called for an independent counsel investigation into the scandal.

The allegations surrounding the Daejang-dong project have been fueled by 19 recordings submitted to the state prosecution service by an accountant named Jeong Young-hak who owns Cheonhwa Dongin No. 5, an affiliate of Hwacheon Daeyu.

In the recordings, Kim, Yoo and others can be heard discussing the distribution of profits from the project as well as delivering a payment amounting to 1 billion won ($844,170) to an insider at the Seongnam Development Corporation.

The recordings also supposedly reveal that the owners and main shareholders of Hwacheon Daeyu and Cheonhwa Dongin No. 5 gave 404 billion won in profits from the Daejang-dong project and hundreds of billions of won in apartment sales revenue to officials at the Seongnam Development Corporation.

According to a source in the prosecution service, Kim also mentioned another individual, whom he only referred to as “that person,” as owning 50 percent of Cheonhwa Dongin No. 1, another Hwacheon Daeyu affiliate, which reaped more than 120 billion won in profits from the project.

The revelation, widely reported in the Korean media, has sparked more speculation regarding the identity of the mysterious stakeholder.

While prosecutors on Monday grilled Kim over allegations that he bribed Yoo in order to have his company chosen as a partner in the project, they also tried to figure out who Kim was referring to in the recordings.

Although Kim told reporters before he entered the Seoul Central District Prosecutors’ Office in Seocho District, southern Seoul, that he was the owner of Cheonhwa Dongin No. 1, his use of the third-person pronoun in the recordings seemed to suggested otherwise.

Part of those suspicions were corroborated by Nam, who said in the JTBC interview that Kim had previously told him that half of the shares in Cheonhwa Dongin No. 1 belonged to an unspecified individual. He added that Kim and Yoo referred to each as “big brother” and “little brother,” and that the expression “that person” likely referred to someone else.

A representative for Kim said Tuesday that he knew the conversation in question was being recorded, and that he deliberately lied at the time. However, this claim has sparked incredulity and further suspicion that Kim is trying to protect the identity of the third-party he mentioned in the recordings.

Amid the continued stream of revelations and accusations, the PPP’s presidential frontrunner and former Prosecutor General Yoon Seok-youl claimed that Lee is “that person” and urged him to submit to questioning in the case.

Lee has adamantly denied all of the allegations against him as “fake news,” including his relationship with Yoo, and argued that he did not make any money from the project, which he touted as providing 5,903 houses for families in the Seoul-Gyeonggi metropolitan area when he was the Seongnam mayor.