Jailed ex-president Park to be sprung on New Year's Eve

Jailed ex-president Park to be sprung on New Year's Eve 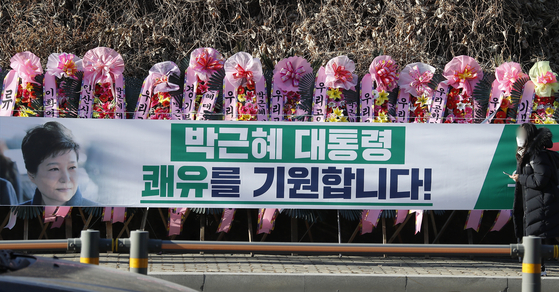 Former President Park Geun-hye was to be sprung from jail at midnight Thursday on a special pardon by the Moon Jae-in government.

Park, 69, the country’s first president to be impeached and then removed from office, was convicted of corruption and abuse of power and sentenced to a total of 22 years in prison. She has been imprisoned at the Seoul Detention Center since late March 2017.

She will receive a certificate of pardon from correctional authorities at the Samsung Medical Center in southern Seoul, where she has been hospitalized since last month. Her guards will be withdrawn, making her a free woman as of Friday.

Park will have spent 1,737 days in incarceration, the longest imprisonment of any former Korean president.

Despite her release, she is expected to remain in the hospital for treatment for chronic illnesses until at least early February.

Park was among a list of 3,094 people granted special amnesties announced on Dec. 24 by the Moon government. They will all be released on New Year’s Eve.

She has suffered from chronic shoulder and back pain, and deteriorating health was a key factor in considering the pardon, according to the Justice Ministry. It cited medical opinions saying that Park needed extended inpatient treatment for orthopedic and dental issues and mental health concerns.

Park was impeached in December 2016 and removed from office in March 2017 over an influence-peddling scandal involving her confidante Choi Soon-sil.

On Jan. 14 this year, the Supreme Court upheld a 20-year prison term for Park and fined her 18 billion won ($15.1 million) and an additional 3.5 billion won through forfeiture of her property.

With the special pardon, Park is exempted from serving her remaining sentence of 17 years and 3 months in prison and also has some 15 billion won in fines waived.

The Justice Ministry said Park will be able to receive some security by the Presidential Security Service after her release, though she has been stripped of privileges granted to former presidents, including a special pension.

It is unclear where she will reside after her release from the hospital.

Her residence in Naegok-dong in Seocho District, southern Seoul, was seized by the Seoul Central District Prosecutors’ Office in March and sold at public auction in June after she failed to pay penalties ordered by the Supreme Court in its final ruling.

People protesting a special pardon granted for former President Park Geun-hye hold a press conference near the Blue House in central Seoul Thursday, ahead of her release at midnight. [NEWS1]

Park’s special pardon received a mixed response from the public. Her supporters held a rally welcoming her release in front of the Samsung Medical Center Thursday and sent floral arrangements.

But people who participated in massive candlelight vigils in 2016 leading up to her impeachment held protests, saying that Park has not properly apologized for her crimes and that her pardon goes against public sentiment. They argued that if Park’s health was an issue, she should have been granted a suspension of the execution of her sentence to keep her culpable for her crimes.

There is growing interest in whether Park’s release will have an impact on the presidential election in March and if she plans to return to politics if she recovers her health.

Yoon Suk-yeol, presidential candidate for the main opposition People Power Party (PPP), welcomed Park’s release in a press conference Thursday during a visit to Daegu, a conservative stronghold supportive of Park, and left open a meeting with the ex-president.

“I want to meet her when she recovers her health," Yoon said. "But I heard that she can't even eat properly. I'll wait, anyway.”

On Tuesday, Yoon said he feels sorry for conducting a probe on Park’s influence-peddling scandal that eventually led to her impeachment as a senior prosecutor, saying he was just doing his job as a public official.

The ruling Democratic Party (DP) presidential candidate Lee Jae-myung, who previously opposed a pardon for Park, told reporters Saturday the issue has “already been decided,” and said he respects the decision as a “constitutional right of the president." He added that while the special pardon is a matter of criminal justice, “judgment by the public and in history remains independent of this.”