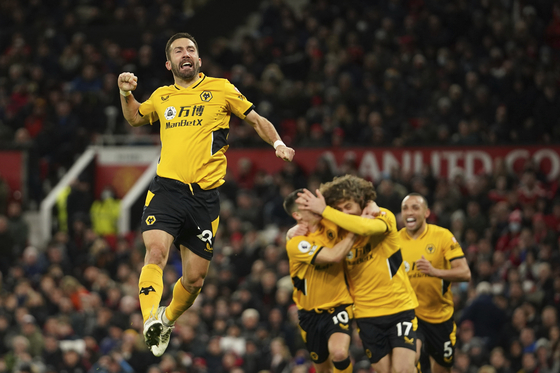 Wolverhampton Wanderers' Joao Moutinho celebrates after scoring his side's only goal during a Premier League match against Manchester United at Old Trafford in Manchester on Monday. [AP/YONHAP]


Wolverhampton Wanderers beat Manchester United 1-0 on Monday, moving just three points behind the No. 7 team in the Premier league standings.

Felipe Joao Moutinho did the damage for Wolves, smashing home the only goal of the game in the 82nd minute. Wolves continue to play without Korean striker Hwang Hee-chan, who is out for the month with a hamstring injury.

Wolves will be back in action on Sunday with a game against with an FA Cup third round game against Sheffield United.

Hwang probably won't be back in the squad until the Feb. 10 game against Arsenal at the earliest, after the international break. His status at that point could well have changed — the Korean striker could prove popular in the January transfer window, with Wolves and a number of other clubs said to be considering a more permanent deal.