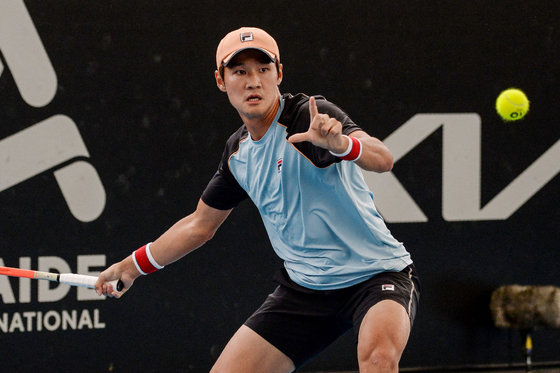 Kwon Soon-woo hits a return against Sweden's Michael Ymer during their men's singles match at the Adelaide International tennis tournament in Adelaide on Wednesday. [AFP/YONHAP]


Kwon Soon-woo crashed out of the men's singles round of 16 at the Adelaide International Tennis Tournament at Memorial Drive in Adelaide, Australia on Wednesday, losing in straight sets to Sweden's Michael Ymer.

On Monday, Kwon beat Yoshihito Nishioka of Japan in the round of 32 to reach the second stage. As of press time, Kwon is still in the men's doubles tournament, with a round of 16 match with partner Artem Sitak of Australia scheduled later on Thursday morning. The pair earlier beat Roberto Carballes Baena and Laslo Dere in the first round of the doubles tournament on Tuesday.

Kwon is currently ranked at No. 53 in the ATP rankings.