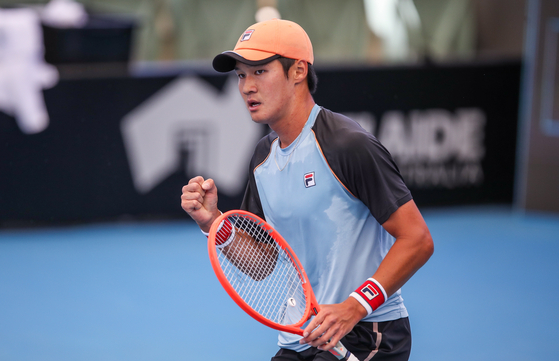 Kwon Soon-woo reacts during his match against Yoshihito Nishioka of Japan on Day 1 of the the Adelaide International 1, at Memorial Drive, in Adelaide, Australia on Jan. 3. [EPA/YONHAP]


Kwon Soon-woo defeated No. 32 Lloyd Harris of South Africa 2-1 on Tuesday in the round of 32 at the ATP Tour Adelaide International 2 held in Adelaide, Australia.

Kwon started out leading the first set 5-3, but dropped his serve game and ended up conceding 7-5.

The second set seemed to be going the same way, with Kwon down 5-4, but then deucing twice to level the match at 5-5 and winning two games in a row to take the set 7-5.

It seemed the tide had turned in Kwon's favor in the third set, and he defeated Harris 6-4 to take the match.

Kwon is currently No. 53 in the world rankings while Harris stands at No. 32. Harris reached his highest-ever rank, No. 31, after advancing to his first-ever grand slam quarterfinals at the 2021 U.S. Open. Despite being the lower-ranked player, Kwon has defeated Harris all three times that the two have faced off, having beat the South African in 2018 and 2019.

Kwon has now passed the round of 32 for the second consecutive week, following the first Adelaide International 1 on Jan. 6, where he dropped out in the round of 16 losing in straight sets to Sweden's Michael Yme.

Kwon will next face Arthur Rinderknech of France in the round of 16 on Tuesday.

After the Adelaide International, Kwon will compete in the season's first grand slam event, the Australian Open starting Jan. 17.