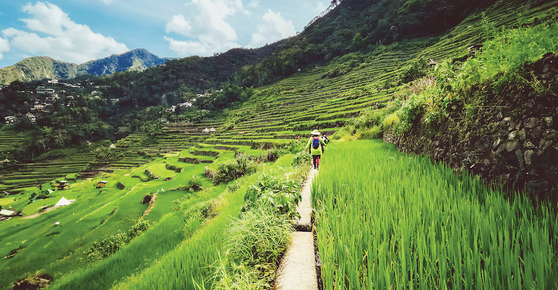 Banaue Rice Terraces in Cordilleras Ifugao Province, north of Luzon of the Philippines, has been registered as a Unesco World Heritage Site since 1995. [PHILIPPINE DEPARTMENT OF TOURISM IN KOREA] 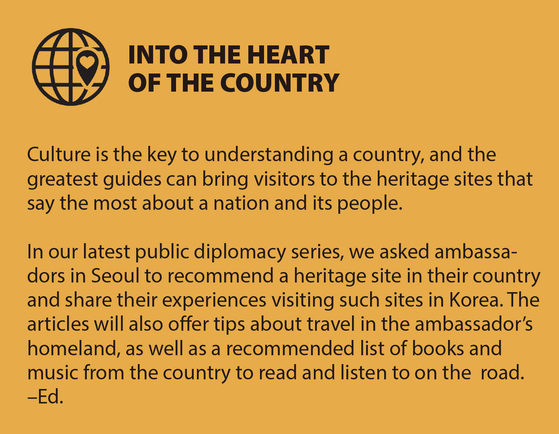 Whether you want to sit at an outdoor cafe in a colonial city that provides a unique mix of European, Mexican and Chinese cultures, take a hike to terraced rice fields made 2,000 years ago, or perhaps go on a boat ride to world’s longest underground river — all is possible at the Pearl of the Orient, said the Philippines Ambassador to Korea Maria Theresa Dizon-De Vega.

“All three sites have different characteristics, and they speak for how the country is home to a number of diverse Unesco heritage sites,” said Dizon-De Vega, speaking with the Korea JoongAng Daily at the embassy in Seoul on Dec. 1.

“The Banaue rice terraces in Cordilleras Ifugao Province have been built to follow the natural forms of the mountains and are a testament to how people built their lives with respect to the environment,” she said. “Vigan is a colonial city in the Philippines with vestiges of our colonial history, and Puerto Princesa Subterranean River National Park at the island of Palawan is one of the seven natural wonders of the world thanks to its mystical landscape.”

The Philippines, known for its beautiful islands and beaches, last month had to pedal back its plan to reopen the country to foreign tourists as cases of the Omicron variant spread globally. From earlier in 2021, the country had implemented full vaccination campaigns at major tourist destinations such as Cebu and Boracay.

The country was also selected to host the World Travel & Tourism Council summit to take place in March this year.

To give potential post-Covid-19 travelers some updated information to assist with their plans or to guide their armchair traveling, a byproduct of the prolonged pandemic and shuttered travel opportunities, the Korea JoongAng Daily sat down with the top envoy from the Philippines in Korea to hear more about the Unesco heritage sites in the country and her travel tips. The following are edited excerpts of the interview. 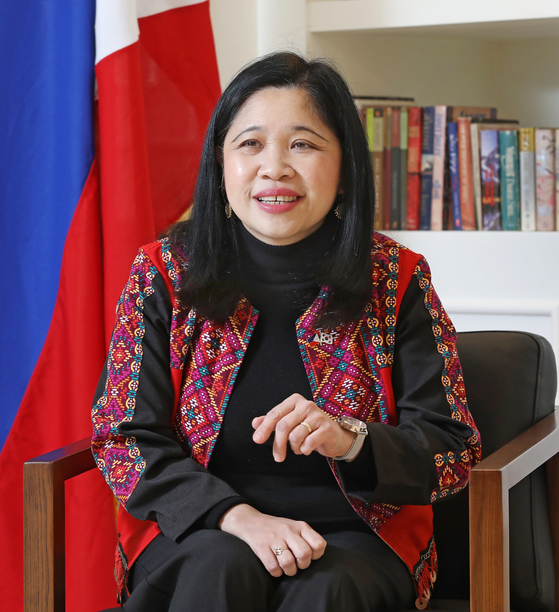 The Philippines Ambassador to Korea Maria Theresa Dizon-De Vega speaks with the Korea JoongAng Daily at the embassy in central Seoul on Dec. 1. [PARK SANG-MOON]

Two of the sites that you recommended have been listed as one of the wonders of the world. Let’s begin with the Banaue Rice Terraces — is it true that the indigenous communities to this day keep their traditions, some 2,000 years old?

At the Banaue Rice Terraces in Cordilleras Ifugao Province, north of Luzon of the Philippines, you can see not only the careful thought put into building these structures, but also the livelihood of the communities that have lived there with great respect for the environment. The terraced rice fields were created 2,000 years ago by the Ifugao residents, with native tools and human power. The village of Batad in this area is famous as a tourist destination where rice terraces can be seen.

Traveling to Banaue is not a simple job. A trip from Manila takes about eight hours and can only be done by bus, van or jeepney — a mode of transportation unique to the Philippines. But if [visitors] want to know what it feels like to be on top of the world and look for a spectacular landscape and countryside experiences, Banaue is a must-try destination.

Once in the area, I recommend trekking to the Banaue Viewpoint for a panoramic view of the terraces, visiting the native Ifugao villages and trekking to Mount Amuyao. 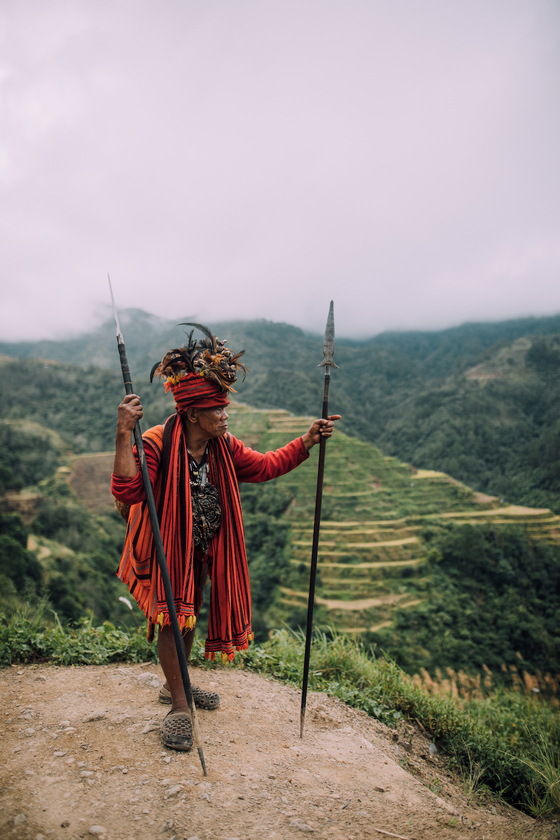 A member of an indigenous community in Banaue Rice Terraces in Cordilleras Ifugao Province of the Philippines. [PHILIPPINE DEPARTMENT OF TOURISM IN KOREA]


Tell us more about the longest underground river in the world, also one of the world wonders located in the Philippines.

The underground river is located in the Puerto Princesa Subterranean River National Park, which is in Palawan, the fifth largest island in the Philippines. Located in the center of the island, the park has been designated as a Unesco World Natural Heritage site and [one of the] Seven Natural Wonders of the World, thanks to this mystical landscape with an 8.2 kilometer [5.1 mile]-long limestone karst landscape along the world's longest underground river.

The best way to fully enjoy the charm of this place is to try a two-hour boat ride along the waterway that takes you to majestic limestone caves, numerous stalactites, stalagmites, and cliffs that have been formed over tens of thousands of years.

You can reach the island by flying to the international airport on the island, located northwest of downtown Puerto Princesa, known as “the city in a forest,” with breathtaking views. To get to the park from the city, drive one or two hours to Sabang Beach and take a boat bound for the park. Once you’re in the area, I also recommend island hopping in Honda Bay, watching fireflies along the river and visiting the Crocodile Farm and Butterfly Garden. 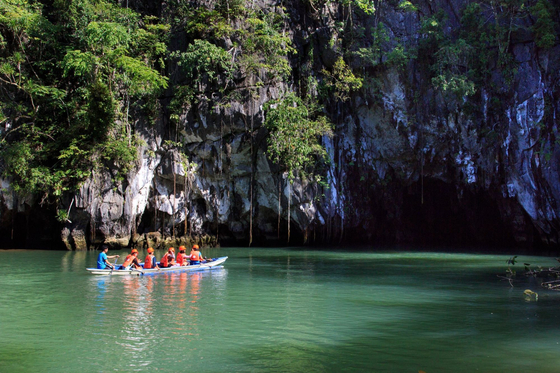 Travelers sit on a small boat on the Puerto Princesa Subterranean River National Park, where the world's longest ″underground river″ is located. [PHILIPPINE DEPARTMENT OF TOURISM IN KOREA]


How would you recommend a visitor spend their day in Vigan, also called the “Little Spain in the Philippines”?

The historic city of Vigan in Ilocos Sur Province, located in the northern part of the island of Luzon in the Philippines, was registered as a Unesco World Heritage Site in 1999 as ruins of a Spanish colonial city. Unesco [estimates] that the Filipino culture is mixed with European and Chinese culture, showing an urban and cultural landscape that cannot be felt anywhere else in Southeast Asia. It is also said to be the best-preserved example of a Spanish colonial city in Asia.

At the Vigan Historic Village, you will hear Calesa horse-drawn carriages gently passing on the Spanish-style stone roads. I recommend visiting some of the heritage homes, a couple which have been restored and turned into museums. They are beautiful architectural work, often furnished with unique furniture, and some of them date back to the pre-WWII times. If you have the time, I recommend also visiting Plaza Burgos, Vigan Cathedral and the Bantay Church Bell Tower. 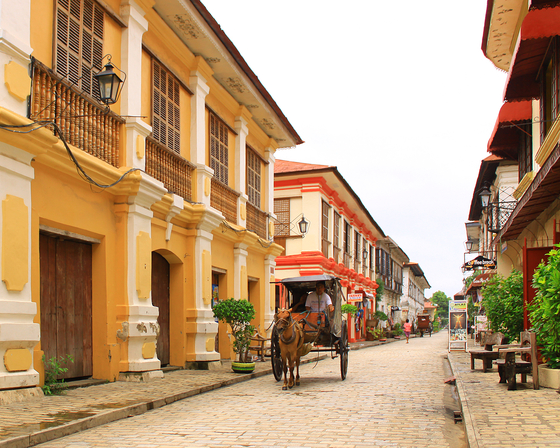 Vigan Historic Village, where Calesa horse-drawn carriages can be heard passing by on the Spanish-style stone roads, is also the place where Vigan was built as a trading center during the Spanish colonial period. [PHILIPPINE DEPARTMENT OF TOURISM IN KOREA]


I recommend visitors spend a whole day and a night in the city, as the ambience of the city changes in the evening when the colonial street lamps are lit — when you’re sitting at an outdoor cafe, it will be as if you had slipped back in time.

Vigan is accessible by plane to Laoag city, about an hour flight from Manila. From Laoag to Vigan it will take around two hours by car.

It sounds like Vigan may have an interesting mix of cuisines as well. Any recommended dishes?

The Ilocos region is famous for delicious food in the Philippines. Iconic foods include longganisa, a traditional Ilocos sausage, batac empanada, a fried Ilocos-style dumpling, and bagnet, a deep-fried pork belly dish. Try the local beer with these dishes, and it will be the perfect way to wash away your travel fatigue. 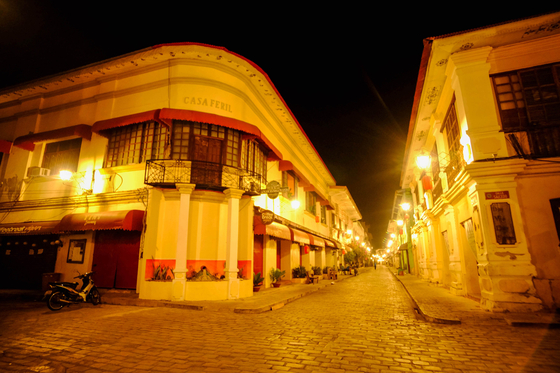 A lamp-lit street in Vigan at nighttime. [PHILIPPINE DEPARTMENT OF TOURISM IN KOREA]


I heard that there are some Unesco heritage sites in Korea that are on your bucket list, and that some of them have to do with your experiences as an academic. Can you tell us more?

With my background as an academic and researcher, I love libraries and academies, and therefore one of the Unesco sites in Korea that I would like to visit are the seowon, or private neo-Confucian academies, in Korea. It will be interesting to see how scholars in Korea organized materials and resources centuries ago, and how these structures have been preserved through the years.

Another site that I am hoping to visit in Korea is a natural site, the Jeju Volcanic Island and Lava Tubes. Like Palawan, these natural heritage sites are those you cannot be satisfied with via photos or videos. You have to experience them in person. I very much look forward to paying a visit to Jeju Island quite soon. 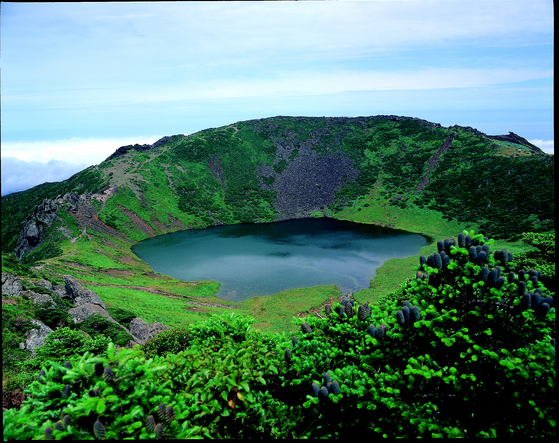 
What are the top objectives of the Philippines' diplomatic mission in Korea these days?

We are working hard to implement the FTA between the Philippines and Korea. We just concluded the negotiations in October and now we are finalizing the details. We’d like the agreement to be an active blueprint for post-pandemic recovery in terms of our overall trade relations, and it will be a very strong foundation to build on the strong engagement we have with each other already.

We are also working with universities in Korea to promote Philippine studies, and have also been actively reaching out to Filipino-Koreans who were born and raised here. I think it is important for these children to be introduced from a young age the positive aspects of coming from more than one cultural background. And many of them are contributing positively here — I recently met a high school student of Filipino-Korean descent, who won an award at the Seoul Metropolitan Government’s program on fashion design and modeling. 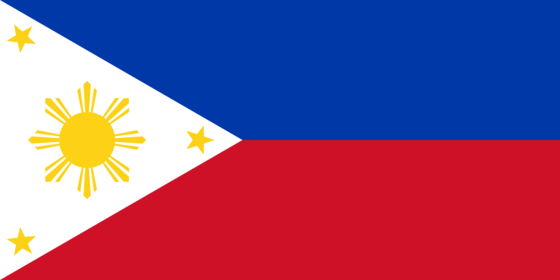 Travel tips
• Best time to visit: For the Banaue rice terraces, between April and June; the historic city of Vigan, during the dry season, between December and February; the national park before the heavy rains start, between March and May.
• What to eat: Sinigang, a sour, clear soup or stew made with either tomatoes, limes, tamarind or guavas and either beef, pork, shrimp or fish; sisig, a dish made from parts of a pig's cheeks, chopped into very small pieces and seasoned with Philippine lime, onions and chili peppers; adobo, a dish composed of either pork or chicken or a combination of both marinated in vinegar, soy sauce, garlic, bay leaves and black peppercorns, simmered in oil; halo-halo, a refreshing dessert similar to Korean bingsu, or shaved ice.
• Books to read on the Philippine culture and cuisine: “Philippine Food and Life” by Gilda Cordero-Fernando, “Food Tour: A Culinary Journal” by Chef Claude Tayag, “Savor the Word” by Doreen Fernandez and “Slow Food” by Erlinda Panlilio and Felice Sta. Maria.
• Movies to watch: “Portrait of the Artist as Filipino” (1965) by Lamberto Avellana, “Ganito Kami Noon, Paano Kayo Ngayon” (1976) by Eddie Romero and “Ang Panday” (2017) by Fernando Poe, Jr.
• Music to listen to: For contemporary, try Ryan Cayabyab; for alternative pop, Ben and Ben; for pop, SB19; or music by international singer and theater star Lea Salonga or popular Filipino pop singer Sarah Geronimo.

travel philippines unesco armchair travel into the heart of the country