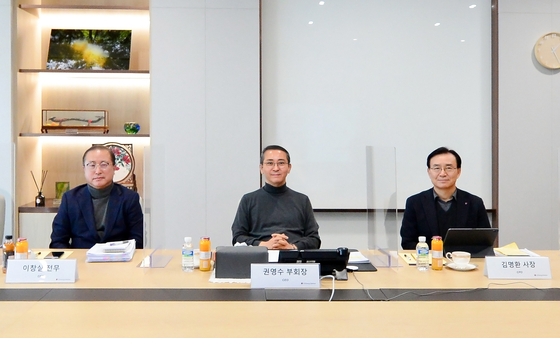 Weeks ahead of becoming a public company, LG Energy Solution insists it is destined to become the largest electric vehicle (EV) battery maker in the world.

The CEO trashed No. 1 Contemporary Amperex Technology (CATL), ticking off the weakness of the Ningde, China-based battery maker: it is dependent on cheap labor, has a narrow customer base and lacks a global manufacturing base.

"CATL was able to grow with Chinese clients and because of cheap labor costs by using Chinese workers," said Kwon Young-soo, CEO of LG Energy Solution, during a press conference Monday.

If the initial public offering goes as hoped, LG Energy Solution will raise 12.7 trillion won ($10.6 billion) and have a 70.2 trillion won market capitalization, bested in Korea only by Samsung Electronics and SK hynix.

Funds raised will be use for facility expansion in Korea, the United States and Europe.

"The market share difference between LG Energy Solution and CATL is destined to narrow for sure," Kwon said. "We have logged 260 trillion won of battery orders. They have to step out and build global facilities in order to become a global player."

As of November, CATL had 29 percent of the market and LG Energy Solution 22.2 percent, according to Seoul-based market tracker SNE Research.

Kwon said the company's competitive edge comes from a diversified client base and global capacity.

"We have various global clients that CATL does not sell to," said Kwon. "In order to satisfy these clients, we have and are building battery factories around the world, including in the United States, Europe and China."

LG Energy Solution plans to invest 5.6 trillion won in the United States, 1.4 trillion won in Europe and 1.2 trillion won in China through 2024. It is forming joint ventures with General Motors, Stellantis and Hyundai Motor. Kwon said another partnership will follow soon.

"Based on orders logged, we expect LG Energy Solution to outperform CATL in terms of market share in the future," Kwon said, without offering a time frame for his forecast.

The Korean battery maker is optimistic about lithium-iron-phosphate (LFP) batteries, which are relatively cheap and are less dangerous in terms of fire risk. It is a technology already being utilized by Chinese manufacturers.

"We plan on using LFP batteries in energy storage systems first and expand their use to EVs in the future," Kwon said.

"It's true that Chinese players jumped in the LFP battery market earlier than us, but it was just a matter of timing for us to enter the market or not. We still believe we have competitiveness in the segment."

LG Energy Solution has been focusing on nickel-cobalt-manganese (NCM) batteries, which have higher energy densities but are also more likely to face issues related to fire.

In August 2021, General Motors announced a massive recall of Chevy Bolt EVs and Bolt EUVs due to battery fires in vehicles in which LG Energy Solution batteries were installed.

When asked about the recall, Kwon said the company will name a chief quality officer and upgrade factories to smart factories to prevent manufacturing defects.