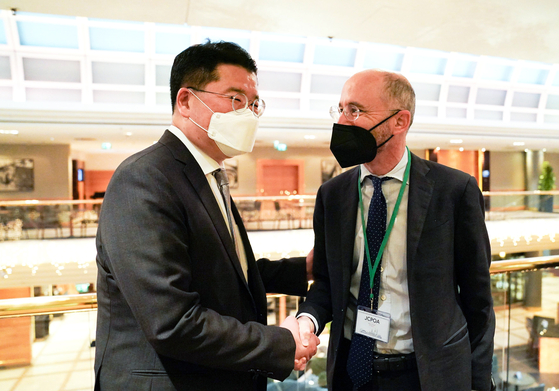 Korea will be able to pay an Iranian family 73 billion won ($61 million) in compensation for a failed business deal thanks to a temporary sanction exemption approved by Washington.

According to the Korean government on Wednesday, the Office of Foreign Assets Control under the U.S. Treasury Department issued a license on Jan. 6 allowing Korea to wire the amount to the Dayyani family in Iran.

The license allows the use of the U.S. financial system to transmit the compensation.

Sanctions against Iran that denied it access to the U.S. banking system prevented the payment earlier.

Malley was in Vienna to discuss reviving the nuclear deal signed under President Barack Obama, which was abandoned by his successor Donald Trump.

In a statement, the Korean government said it hopes to quickly resolve the Dayyani situation.

The Dayyanis filed for arbitration at the International Center for Settlement of Investment Dispute (ICSID) in September 2015 saying their acquisition of Korea’s Daewoo Electronics was botched by unfair treatment by the Korean government.

In 2010, Entekhab, which is owned by the family, paid 10 percent or 57.8 billion won as a down payment to buy a controlling stake in Daewoo Electronics.

The following year, the state-owned Korea Asset Management Corp. (Kamco) and creditors of Daewoo Electronics scuttled the deal citing uncertainties surrounding global sanctions on Iran and Entekhab's failure to follow through on demands made by the creditors.

The creditors did not return the deposit.

In 2018, the ICSID ruled in favor of the Dayyanis and ruled the Korean government should pay them 73 billion won.

The family had demanded 93.5 billion won including interest and costs.

It was Korea’s first loss in an international settlement dispute.

The Korean government immediately filed a suit in a British court demanding that the ICSID ruling be overturned. It lost that suit in 2019.