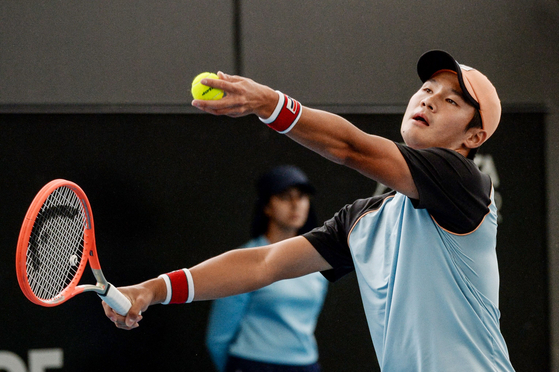 Kwon Soon-woo serves against Sweden's Michael Ymer during their men's singles match at the Adelaide International tennis tournament in Adelaide on Jan. 5. [AFP/YONHAP]


Kwon Soon-woo crashed out of the men's singles competition at the Adelaide International 2 at Memorial Drive in Adelaide, Australia on Wednesday, losing 2-1 to Arthur Rinderknech of France in the round of 16.

Kwon put up a formidable fight in the first set, breaking Rinderknech's serve game to pull out of a 5-5 tie and take the set 7-5. But Kwon then conceded the next two sets, 6-3 and 6-2. Stronger serves gave Rinderknech an edge, with 18 aces as opposed to Kwon's four.

Kwon has now failed to pass the round of 16 for the second consecutive week, following the Adelaide International 1 on Jan. 6, where he dropped out at the same stage after losing in straight sets to Sweden's Michael Yme.

Kwon will next compete in the season's first grand slam event, the Australian Open starting Jan. 17.

Kwon's best-ever finish at a Grand Slam tournament came in June last year, when he advanced to the third round of the French Open. Only two Koreans, Chung Hyeon and Lee Hyung-taik, had previously reached the third round in Paris, and neither made it any further.

In July last year, Kwon represented Korea at the Tokyo Olympics where he dropped out in the first round of the men's singles match.

The Australian Open will start on Jan. 17 and continue to Jan. 30.