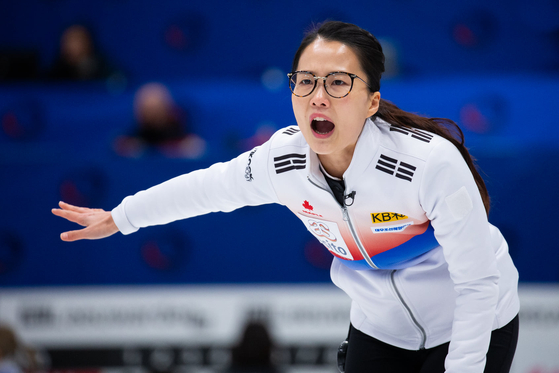 Kim Eun-jung, skip of the Korean women's curling team, gives directions to her teammates during a match against Latvia in the women's World Curling Federation Olympic qualification playoff on Dec. 18 in Leeuwarden, the Netherlands. Team Kim earned their Beijing Olympic berth as they beat Latvia 8-5. [WORLD CURLING FEDERATION]


PyeongChang Winter Olympics silver medalist Kim Eun-jung returns to the ice at the Beijing Games, marking the second consecutive time the emphatic skip and her team have represented Korea on the big stage.

The Korean women's curling team — the infamous Team Kim of the PyeongChang Olympics — earned their Beijing Olympic berth as they beat Latvia in the women's World Curling Federation Olympic qualification playoff on Dec.18 in Leeuwarden, the Netherlands.

During the PyeongChang Games, Team Kim went down in history not only for winning a silver medal in a sport that was practically unheard of in Korea, but also for doing it in style with the sportsmanship and team spirit of the five former classmates from Uiseong Girls' High School in rural North Gyeongsang.

In curling, the skip is the captain of the team and the team is named after the skip's last name, hence Team Kim. The skip directs the teammates where to aim the stone from inside the house using their voice and broom.

At the PyeongChang Games, skip Kim Eun-jung's distinctive glasses and emphatic yells of "Yeong-mi" to teammate Kim Yeong-mi quickly became one of the biggest global memes of the Games.

This time at the Beijing Games, Kim Seon-yeong has taken over the lead position and will take over the job of delivering the first two stones of the end. Kim Cho-hi takes second and Kim Kyeong-ae takes third, with Kim Yeong-mi as reserve.

"I think I will be calling out Seon-yeong's name more this time," Kim Eun-jung told the JoongAng Ilbo. "Depending on the condition of the ice, I might call Cho-hi a lot too."

Though she may yell a different name at the Beijing Games, Kim Eun-jung says that her signature glasses and serious facial expression will stay.

"I only wear glasses on the ice because I need to see the ice sheet in detail," said Kim Eun-jung. "I think I naturally make that strict and serious face that I do because the match is so intense and I need to keep my cool in the many different situations that arise." 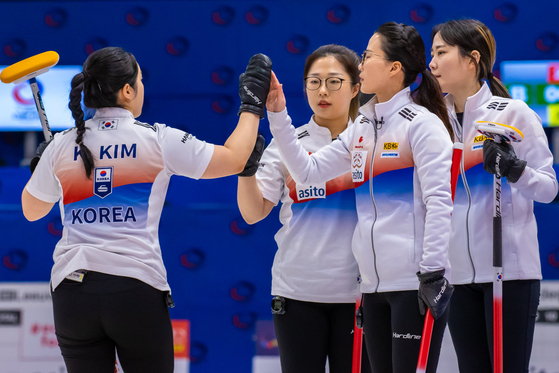 From left, Kim Kyeong-ae, Kim Seon-yeong, Kim Eun-jung and Kim Cho-hi cheer after winning 8-5 against Latvia on Dec.18 at the curling qualifying tournament for the 2022 Beijing Winter Olympics in the Elfstedenhal in Leeuwarden, the Netherlands. [WORLD CURLING FEDERATION]


Since the PyeongChang Games, Kim Eun-jung has had some real changes in her personal life. After getting married right after the Games, she gave birth to a boy in May of 2019.

"I want to send a message to female curlers in Korea, and actually all women in Korea, that we can do just as much even after having children," Kim Eun-jung said. "Canada's skip Jennifer Jones has two children. While captaining the team for a long time, she is still at the Olympics even after the age of 40."

The team has been through some tumultuous times as well. Barely nine months after their Cinderella run at the Games, the curlers went public with accusations that they had been subject to unfair treatment and verbally and emotionally abuse by their curling coaches and officials in Uiseong. They also revealed that the coaches had withheld nearly 94 million won ($83,600) of prize money.

"It got even worse after the PyeongChang Olympics," Kim Eun-jung said at the time. "I felt that I needed to speak up even if my career comes to an end. If I don't fix this now, I felt like the younger athletes would have to go through the same thing."

Despite the hardships, Kim Eun-jung says that she is proud to have overcome them and that Team Kim is ready to win Korea's second medal in curling.

"It was a problem that had repeated for 10, 20 years," said Kim Eun-jung. "But many people encouraged us and I am happy that it is all over now.

"The Olympics are where the top 10 countries vie for the trophy and is naturally more intense but I think there will be good results if we concentrate on our game. Like we did at PyeongChang, the four of us will come together and do the best we can."

Only Team Kim will be able to represent Korea in the curling events at the Beijing Olympics as the men's team and mixed team failed to earn berths. Alongside Korea, host China, Switzerland, Russia, the United States, Sweden, Denmark, Canada, Scotland and Japan will compete in the women's curling event.

Olympic curling starts on Feb. 2 and will continue through Feb. 20.