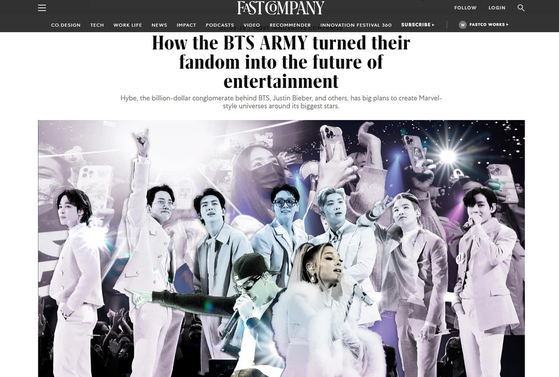 
HYBE, one of the major K-pop powerhouses in Korea, was selected by American business media outlet Fast Company as one of “The World’s 50 Most Innovative Companies 2022.”

HYBE also topped Fast Company's list of “The 10 Most Innovative Media Companies of 2022.”

Fast Company focused on HYBE’s growing influence on the global music industry. It evaluated that HYBE was changing the structure of the music industry through active pursuance of fan-based communities and utilizing its artists’ intellectual property (IP).

“America’s hold on global pop culture is over,” the outlet wrote. “There’s no greater evidence than the K-pop juggernaut BTS, whose seven members descended on Los Angeles last November for the biggest live music event of the year: a series of sold-out, 50,000-person concerts at SoFi Stadium."

“So even with the Omicron variant starting its winter surge, fans arrived in L.A. from across the country and globe. In the end, BTS sold 214,000 tickets and took in $33 million across just four shows, breaking records."

The outlet also quoted HYBE’s CEO, Park Ji-won as saying the company will continue to pursue new technologies and content formats for entertainment, to “diversify touchpoints between artists and fans and further build this intimacy.”

The key to establishing loyalty amongst fandom lies in sincerity, and allowing the force of that fandom to grow “might seem simple, but it remains the most fundamental and powerful principle,” Park said.