Famous monk chef emphasizes becoming one with the food

Famous monk chef emphasizes becoming one with the food 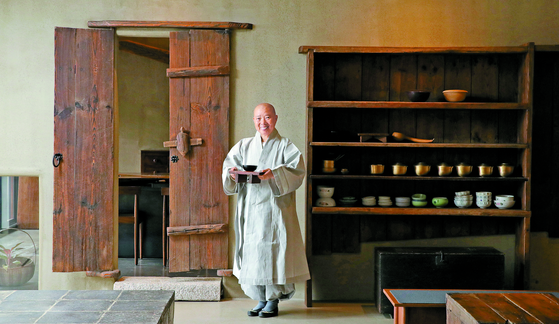 
Buddhist monk Jeong Kwan, 65, may not be a professional chef, but she is in the vanguard of world-class cuisine.

Asia’s 50 Best Restaurants is the world’s premier restaurant ranking and an influential guide to restaurants across Asia. The ranking’s Icon Award is voted for by over 300 global culinary leaders such as chefs and food critics and honors culinary icons who have made an outstanding contribution to the restaurant industry.

Previous winners of the award are chefs Supinya Junsuta of Thailand in 2021 and Yoshihiro Murata of Japan in 2010.

“Cooking is part of my Buddhist practice,” said Jeong Kwan during an interview with the Korea JoongAng Daily. “I believe that my practice will bring relationships with happiness.”

In recent years, Jeong Kwan’s food has brought joy not only to her and her fellow monks but also to those outside her secluded temple.

Seven years ago, French chef and Buddhist monk Eric Ripert tasted her food at Baekyangsa Temple in South Jeolla and invited her to New York to cook for selected guests at his restaurant Le Bernardin. There, Jeong Kwan’s food enchanted New York Times reporter Jeff Gordinier who published an article on her in the same year.

Nicknamed the “philosopher chef” in the Times article, the Buddhist monk became a sensation in the culinary world for her exquisite dishes and spiritual approach to food.

She rose to wider fame after appearing on an episode of the Netflix series “Chef’s Table” in 2017, an Emmy award-winning documentary series about chefs around the globe.

Jeong Kwan is currently the director of Chunjinam Hermitage at Baekyangsa Temple where she has been residing in near isolation from society since the age of 17.

She learned to cook Korean temple food from other monks and has had no formal culinary training.

“I believe that there are no levels in cooking,” said Jeong Kwan. “If you become one with the ingredients and respect the natural elements, that is enough. For example, if a three-year-old child pours his or her heart into making food, it can be the best dish in the world.”

A style of cuisine well over 1,000 years old, Korean temple food is strictly vegan and does not use garlic, onion, chives, leeks or spring onions. Temple cuisine is about keeping a calm state of mind, and the five ingredients are said to arouse excitement when ingested, according to Buddhist practices.

Jeong Kwan explained that temple cuisine is a style of cooking that is “environmentally friendly and respects and supports life.”

“It is about maximizing the taste and nutrition of plant-based ingredients with limited seasoning and condiments,” she said.

Jeong Kwan also described temple food as a medium for “finding oneself.”

“The people who cook and the people who eat temple food are all on a journey to find their true selves. It also connects people. […] I found that I was able to share my energy and make connections through food and support people on their journeys to find themselves. I believe this is the role of Korean temple cuisine.”

For this experience of self-enlightenment, people from all around the world visit Jeong Kwan and taste her food at Baekyangsa Temple about 273 kilometers (170 miles) away from Seoul. 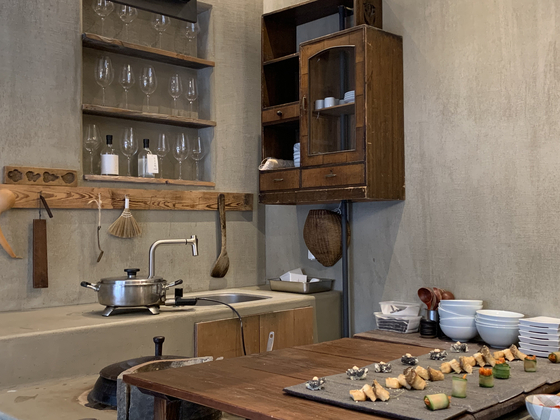 
To make her food more accessible to the public, Jeong Kwan’s culinary apprentices opened a restaurant in the city of Suwon, Gyeonggi, some 40 kilometers away from Seoul, in 2019.

The restaurant, Doosoogobang, operates under the monk’s cooking philosophies and even uses some condiments and food made by Jeong Kwan at Baekyangsa Temple such as her doenjang (soybean paste), ganjang (soy sauce) and kimchi. Jeong Kwan, however, does not own the restaurant.

It currently serves only up to six customers for each meal. Reservations are mandatory.

A group of six eats together at one long table in a closed room with an open kitchen. Two chefs cook and serve the entire meal comprised of solely vegan dishes.

The restaurant’s spring season theme is “soybean.” Under this theme, customers experience the taste of the ingredient in its various stages such as soymilk, sundubu (soybean curd) and freshly molded tofu blocks. 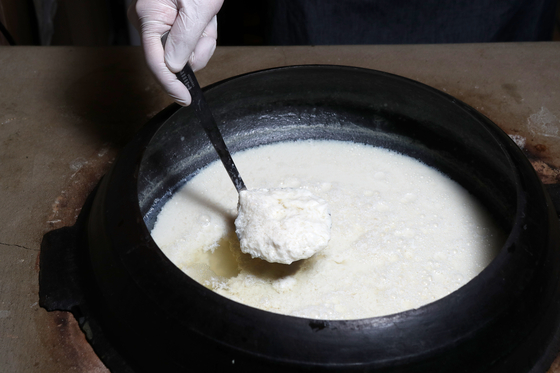 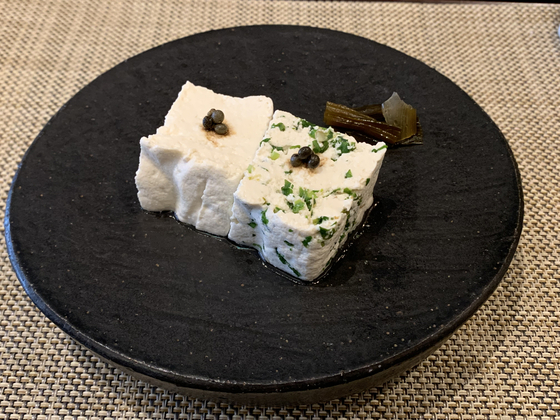 
The theme and the menu change every season.

None of the dishes are exceptionally unique nor revolutionary in that they can all be found in a typical Korean restaurant.

But the familiar foods are not without small twists at Doosoogobang, like the lotus root salad dressed with Jeong Kwan’s schisandra (otherwise known as five-flavor berry or omija) syrup; tofu blocks mixed with freshly plucked naengi (an edible plant that is also called Shepard’s Purse); and noodles with doenjang broth instead of the ordinary broth made from anchovies. 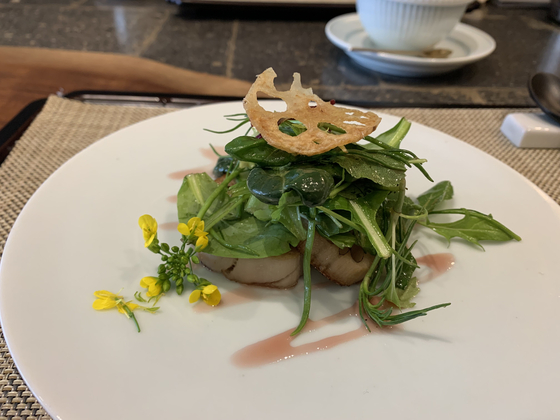 
“To me, cooking is not about being fancy or showing off difficult skills, but becoming one with the ingredients,” said Jeong Kwan. “When I am cooking, I think of the ingredients as if they are a part of me. When using water and fire to cook vegetables, I feel we have become one. In short, when cooking, it is more important to understand the ingredients and create a dish that is harmonious than to apply technical skills. The heart and soul put into [preparing] the food will be received by the people who eat it and contribute to creating a positive and sustainable cycle.” 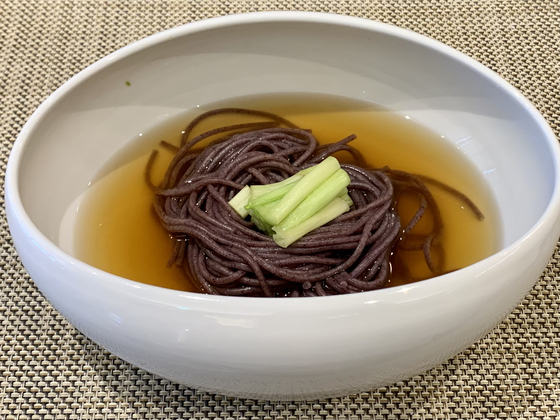 
Below are more excerpts of the online interview with Jeong Kwan.


You became a Buddhist monk at the age of 17. Why did you decide to become a monk at such an early age?

From a young age, I wanted to live by myself. I remember being in grade four of elementary school and telling my father that when I grew up, I would live alone with nature. In my late teens, my mother passed away. I grieved, and after 50 days I went to a temple. There, I met other monks who became my new family. I found enlightenment and joy in practicing Buddhism. I then decided that I wanted to spend the rest of my life here practicing Buddhism.


As someone who has been practicing veganism for many years before it became a trend, do you have any vegan cooking tips for people who are now adopting this diet?

The most important thing is to find balance. To do this, understanding your ingredients is key. Becoming one with your ingredients enables you to fully use everything, from the root to the stem and leaves. Identifying which seasoning or condiments [the ingredients] need to balance their flavors is also important. In Korea, we use fermented and aged sauces such as doenjang and ganjang. This helps to balance [the flavor of] ingredients. For protein, I use a lot of shiitake mushrooms and radish and lotus roots.


You have done so much to introduce Korean temple cuisine to the world. What is next for you?

I have hope that we can live a life that honors and respects nature and our environment, promotes a sustainable lifestyle and has a positive effect on climate change. To do this, I need to change. Small actions start from me and I hope I will be able to share this [lifestyle] with more people around the world, including the wonderful chefs in the Asia 50 Best community.


It is almost spring in Korea. What is a dish that you love to cook during this season?

Spring is a season for awakening. All animals and plants wake up in spring, so it is a good time to make up for the missed nutrients of winter. New spring vegetables like chamnamul (a local herb) and root vegetables that have survived the cold winter like deodeok (the root of a local mountain herb) and bellflower root are often bitter and strong in aroma but are good for your lungs. Especially in this time of Covid-19, these ingredients can be very beneficial and important to us.

Aussie brekkies in Korea come with a side of good vibes