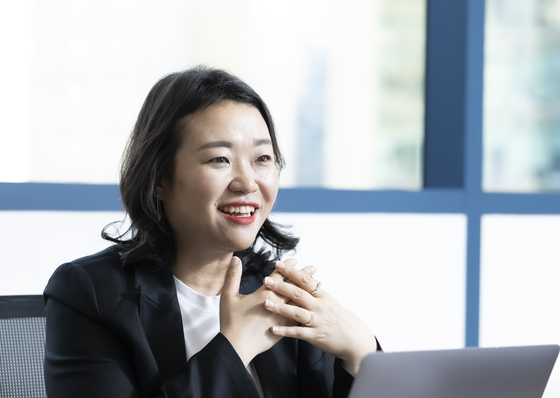 Watcha's Chief Marketing Officer Kim Hye-jung speaks during an interview with the JoongAng Ilbo on June 2 at its building in Seocho-dong, southern Seoul. [KWON HYUK-JAE]


Watcha, Korea's streaming service, said making "Semantic Error" was a simple, calculated business decision based on years of data and a good measure of analysis. It was not as much of a gamble as it might first have seemed.

"Semantic Error" is series about a campus romance between two male students, played by a pair of minor K-pop stars: Jaechan of DKZ and Park Seo-ham, who was with KNK.

Released in February, it was the most watched on Watcha for eight weeks running and is being adapted into a full-length film, a first for a streaming service. The film will be shown at the Bucheon International Fantastic Film Festival (Bifan) on July 7.

The success of "Semantic Error" is significant not only because it was Watcha's first original series, but also because it limelighted the under-the-radar boy love (BL) genre, in which relatively tame stories about close relationships between men are featured.

The JoongAng Ilbo recently interviewed Watcha Chief Marketing Officer (CMO) Kim Hye-jung and discussed how the company is holding its own against Tving, Coupang Play and Waave in terms of home competition and Netflix, Apple TV+, Disney+ from overseas. 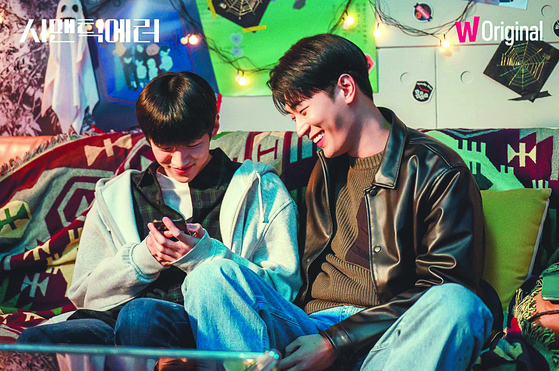 
"We're extremely grateful because it is proof that what Watcha pursues and its values are being accepted and recognized," Kim said from Watcha's building in Seocho-dong, southern Seoul.

Watcha's vision is "to make a variety of content where everyone's differences are accepted, and each individual's tastes are respected by others."

The creation of a BL series wasn't a coincidence, she says, but a meaningful achievement as it was in line with the company's values.

Data was behind Watcha's bold move into BL, which other local broadcasters or cable channels have avoided. Watcha, which initially started out as a rating and recommendation service called Watchapedia in 2012, has about 700 million pieces of rating data accumulated over the last decade.

"We did not start working on 'Semantic Error' with the determination, 'OK, let's try BL,' but we could see in our data analysis that although there was high demand for the genre, not enough supply was met."

Another critical factor for enhancing the overall quality of content lies in the environment. Regardless of their position in the company or their department, all employees can access the accumulated data and offer their opinions.

"For our newbies, they are surprised to see how much we interact and communicate," Kim said. "Anyone can formulate an opinion for content, and if that perspective sounds valid, we choose it and apply it, and adjust it to fit the needs of the project."

After Watcha creates the content, it actively takes suggestions or follows demand based on customer feedback. The sole reason why the company decided to adapt "Semantic Error" into film was that there were "so much demand" from the users.

"We saw many posts online that said they would love to watch the series in theaters, and we have received countless emails with similar requests," Kim said. "It wasn't an easy decision to make because there are many factors we need to take in to turn a series into a film, but we decided to pursue it because we thought it was also part of the fandom culture to enjoy the content together."

Due to Watcha's active response to users requests, it ranked No. 1 in brand loyalty among streaming services by Korea Customers Council for five consecutive years. According to Kim, she's plastered to the monitor to check user response almost 24/7.

Watcha still ranks bottom in monthly active users (MAU) among seven streaming companies in Korea — Netflix, Wavve, Tving, Coupang Play, Disney+, Seezn and Watcha. And, in general, viewership numbers globally are under pressure due to the ending of the pandemic.

"It has now become the new normal to watch OTT platforms, so I do not believe it will go back to the situation before the Covid-19 pandemic," she said using the industry jargon for streaming services. "It is absolutely essential to more evidently outline Watcha's own distinctness at times like this.

"I do not believe that big commercial hits that the absolute majority loves is the only criteria of success. As similar content continues to show across a variety of platforms, there will come a time when it will be critical for each streaming service to possess its own unique characteristics. I believe it's most important to become an irreplaceable service, where we can lead people to think 'if I want to watch a content like this, I should subscribe to Watcha.'"