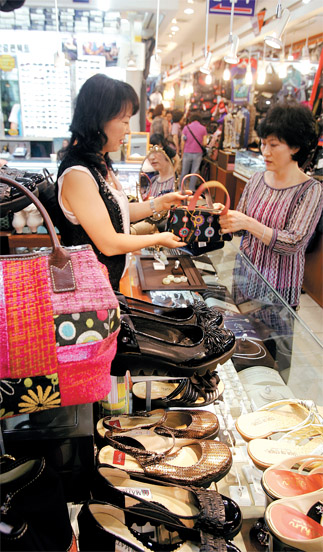 Sohn Tae-young, left, the owner of “Omega II,” a shop selling jewelry, shoes and bags, deals with a customer at the basement floor of the Dokebi Mall, the biggest of the 11 imported goods malls, last Friday. Sohn, who has run the shop for six years, said she has customers from all across the country coming to buy imported stuffs every day. By Jeon

In an era of openness when everything is revealed inside out through advanced communication technology and media, there is a market in Seoul whose mysterious charm is still covered in a veil.

Dokebi (Goblin) Market located in Namdaemun Market, one of Asia’s biggest outdoor markets, is home to all kinds of exotic products from overseas. But the market has rarely tried to sell itself to the public.

The imported goods market has kept its business practice behind the scenes over the past three decades. The exact kinds of items imported, as well as how, from whom and at which prices, remains a secret that is shared only among importers.

There is one simple sales motto: “There is nothing on earth you cannot find here,” a slogan that attracts customers and retail sellers from across the country. 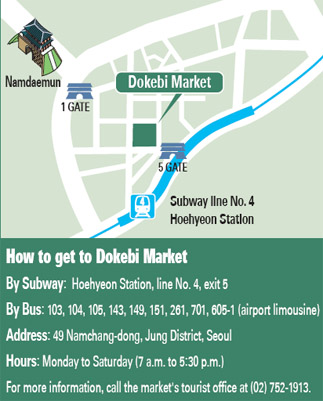 Dokebi is a goblin in the old Korean folktales who carries a magic club and has the power to grant you everything you need. For an imported goods market, there would be no better name than that.

Indeed, the market, currently comprising 11 imported goods malls, has more than 50,000 items from virtually all existing countries, according to the association of malls.

Goods sold in every nook and cranny of Africa and South America are found there.

Even products from neighboring North Korea, the most clandestine country in the world, are available, so people say.

Dokebi also means secrecy, and some of the folktales say the mysterious figure never liked being shown to the public. If a name has the power to define what owns it, the name of Dokebi has done a perfect job for the market so far.

Such opaqueness, however, has often left the market subject to investigation by the authorities aimed at clamping down on smuggled goods. This kind of attention makes the market stall holders wary of the media.

Last Friday, many of the merchants at Dokebi Mall, the biggest of the 11 imported goods malls, were uncomfortable about questions concerning their goods.

“Merchants here don’t like being questioned by someone who is not a customer,” said Kim Myung-chul, 63, the president of the imported goods malls’ association. For that reason, Kim took this reporter on a tour of the mall.

Recently named as one of the seven public relations executives for the Namdaemun Market, Kim said he is now trying to be more media friendly.

The four-story Dokebi Mall, where the office of the association is located, is not given entirely to imports. Three floors have been rented to other domestic goods sellers and only the basement floor is devoted to imports.

Still, it is more than double the size of the other imported goods malls, Kim said.

The basement floor at Dokebi Mall has around 500 small shops, while the other malls have up to 200 each.

Besides the varied general merchandise that Kim said number more than 10,000, kitchenware, women’s clothes and food are among the items on sale. The products came from everywhere, but a majority of them are from the United States, Japan and China, Kim said.

Kim said such diversification in the kinds of items is a big attraction of the mall.

Most customers are women in their 40s or older, who Kim said are the main customer base.

Kim claimed, as direct importers and wholesalers, prices at Dokebi Market are competitive. For instance, imported cosmetics priced at more than 100,000 won ($98.6) at department stores are sold there at 50,000 won to 60,000 won.

Kim Cheol-soo, 47, the owner of the Handok Optical, a glass shop, was trying to sell a Chanel brand.

The woman asked whether the price could be discounted, but he shook his head. “We don’t bargain. It will be the lowest price you can find,” he said.

The competitiveness of the mall, however, is under threat. Dokebi, just like other outdoor markets in Korea, is facing a crisis of survival.

Other sales channels of imported goods, such as the Internet shopping malls and large-sized discount stores, equipped with low prices, convenience for shopping and variety of products, are fast eroding the status of Dokebi Market.

In its heyday, retail sellers from the rural areas packing up to 140 buses visited the Dokebi Market every day to buy imported goods.

Now the size is being dramatically reduced, Kim Myung-chul said.

With the reduction in the number of customers, the size of the Dokebi Market, once taking up the biggest portion of the Namdaemun Market, has shrunk.

The number of merchants at the imported goods malls, numbering 16 at that time, was around 5,000.

In terms of the annual sales, the market is currently second at Namdaemun Market after the accessory market, according to Kim.

The sense of crisis was shared by the representatives of the imported goods markets when they gathered for the association’s monthly meeting on the day.

According to Kim, the topic of the day was how to revive the Dokebi Market.

He said they are preparing a list of tasks that they will submit it to the Seoul municipal government.

Kang Myeong-seok, a Seoul city official in charge of the Namdaemun market, said the city government will come up with a plan to refurbish Namdaemun Market within the year.

“Despite the success we enjoyed in the past, it’s highly possible that we will wake up one morning and find Dokebi Market gone,” Kim said.

“Without changing ourselves, we cannot guarantee survival.”