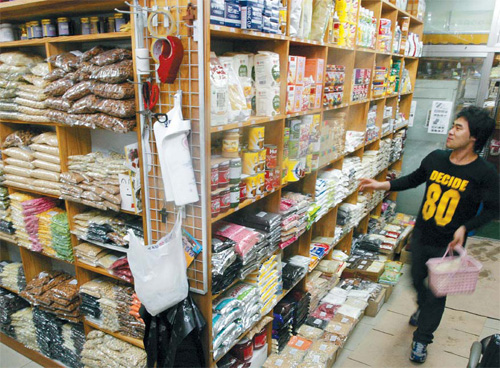 Flatbed trucks, visitors and hawkers crowd Bangsan Market in central Seoul’s Euljiro 4-ga. Most of the shops sell wholesale wallpaper or flooring but one part specializes in the sweet and mellow.

This is where shoppers come for items ranging from gingerbread man cookie cutters and dried cranberries to button-shaped dark chocolates and digital baking scales that can weigh as little as one gram of salt, baking powder or flour.

If you relish the smell of freshly baked bread or love making favorite cakes and cookies for your loved ones, Bangsan Market’s “Baking Street” is the place to go.

From hard-to-find raw ingredients such as powdered rye to cake decorations, dough mixers and pie pans, the street has it all.

“This is the biggest shopping place [for bakers] in Seoul because most baking utensils and ingredients are hardly found in ordinary discount stores - maybe because Koreans usually eat rice instead of bread,” said Lee Hye-won, a 34-year-old woman who runs an ice cream parlor in downtown Seoul that also sells homemade cookies and muffins.

On one rainy day last week, Baking Street was packed with shoppers, umbrella in one hand and shopping bag in the other, browsing among open-air stalls.

One girl wearing a high-school uniform handed Lee Chang-woo, the head of Kyunghoon Industry, a 1,000-won bill (70 cents) for a canister of rainbow-colored sprinkles. 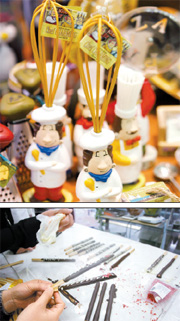 Bangsan Market’s Baking Street sells whisks and other baking utensils (top) and supplies for customers who plan to make chocolate-covered snacks ahead of Pepero Day, which falls on Nov. 11. By Oh Sang-min

“I came from Bucheon to buy some cookie ingredients for the upcoming Pepero Day,” said 18-year-old Kim Hyun-jung.

On Pepero Day which falls on Nov. 11, young people often exchange stick-shaped chocolate-covered snacks as a token of love and friendship because the date “11/11” resembles four sticks of a snack called Pepero, made by Lotte Confectionery. Kim said an increasing number of students make the stick-shaped snacks themselves.

“Some items here are far cheaper than on online shopping malls but some are more expensive. So you should compare prices through Web sites before you make a visit,” said Han Ah-reum, one of the three, who is a regular on the street.

Another woman in her late 50s purchased five kilograms (11 pounds) of mix and several types of food coloring to make hotteok, Korean rice pancakes filled with sugar and nuts, for her family.

What makes people visit this hard-to-find street in a remote corner of Bangsan Market? 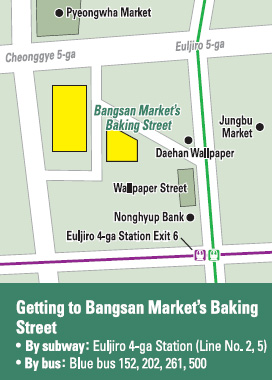 “There are between 25 and 30 shops, but each shop offers more than 3,000 items, meaning that you can find everything you want for baking here,” said Lee of Kyunghoon Industry.

He has been running his shop since 1976.

“Most shops have been here for more than 30 years. In the past, there were more baking stores but as rents have gone up, most relocated to the outskirts of Seoul,” Lee added.

While it enjoys star status these days, Baking Street hit a slump in the mid-’90s when franchise bakeries replaced privately operated small and midsize bakeries. In recent years, the street has perked up since more and more homes have ovens.

For this reason, the street’s main customers are now young women or housewives who bake cookies and cakes for fun, instead of professional pastry chefs.

The popularity of inexpensive toaster ovens, which are about the same size as microwave ovens, also fueled the home baking craze along with easily shared recipes from blogs and Web sites.

“After some local snacks turned out to be contaminated with melamine, we saw about 30 percent sales growth this month as of Oct. 22 from a month ago,” said Yoo Seung-hee, a manager at Bread Garden, which operates five baking supply shops across Seoul, including one in Bangsan Market.

“Even people who have quit baking for some reason started again recently because they are concerned about food safety,” Yoo said.

So why did all these shops gather in one location in the first place?

According to store owners, Baking Street developed from street vendors who sold flour after the Korean War.

Most of the first-generation retailers have passed away, but some shops are run by their descendants. Euishin Company, which has been in the same family for three generations, is one.

The ingredients shop was even a featured location in the hit TV drama “My Name is Kim Sam-soon,” a story about a 30-something woman who works as a pastry chef.

Baking Street is made up of three kinds of retail shops: stores that sell baking equipment, purveryors of ingredients and packaging suppliers.

“Nobody makes cookies and cakes for themselves. They want to share the sweets with others. That’s why shops selling diverse packaging materials such as ribbons, cake boxes, cookie boxes and stickers also thrive here,” said Jung of Jeil Package.

Asked about shopping tips for bargain hunters, most retailers say that people should regularly patronize the same shops if they want discounts.

People should also visit early if they want to make sweets ahead of Pepero Day or Valentine’s Day because the street gets 10 times more customers than usual during those two sweets-centered calendar days.

Easy-to-follow, do-it-yourself kits for making chocolates and other treats are also available for those days.

Bread Garden also provides free classes on how to make cookies and cakes for those who apply online at www.breadgarden.co.kr.