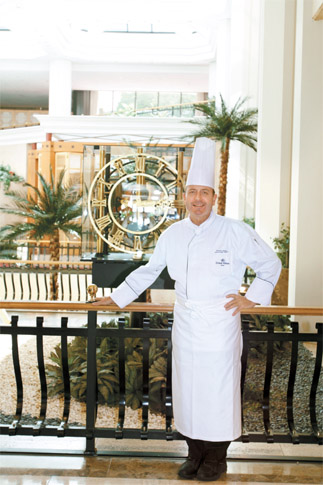 Erwin Graf, a Swiss citizen and the executive chef of the Grand Hilton Hotel in Hongeun-dong, northwestern Seoul, has a constant craving for the food of his homeland.

His favorite place to quiet his growling stomach is Chef Meili, a cozy restaurant that serves traditional Austrian dishes in Itaewon, central Seoul. It’s not quite Switzerland, but for him it’s close enough.

“Switzerland shares some of the same culture with Germany and Austria, especially when it comes to food,” Graf said yesterday. “Some dishes are even made with the same recipes and ingredients, such as schnitzel [pork cutlet], for example, and potato salad.”

The menu at Chef Meili, which is named after the restaurant’s owner and chef Christian Meilinger, includes traditional regional favorites including goulash (beef stew with vegetables) served with spaetzle (noodles or dumplings), schnitzel and strudel (pastry with fruit filling).

For a quick bite, the restaurant also offers a deli and lunch menu that includes a sandwich with either cold cuts or hot sausage with a drink for 6,500 won ($5.20), goulash with a roll for 7,500 won, a sandwich with smoked meats or salmon for 7,500 won and a pastrami sandwich with sauerkraut and cheese for 9,500 won. All of the items are available for takeout.

Graf enjoys sitting at a table on the small roof terrace for what he says is a pleasant and relaxing evening.

Although neither the interior nor the exterior of the restaurant, which opened almost three years ago, are grand or luxurious, Graf says it has a cozy atmosphere that really plays up the authenticity of the food.

“The dishes there use imported spices and seasoning,” the chef said. “Also, the restaurant makes its own sausages, dried meat and 30 kinds of salami according to its own original recipe.”

Chef Meili is located across from the Hamilton Hotel, Itaewon Station, line No. 6, exit 4.

Erwin Graf, executive chef of the Grand Hilton Seoul, was born in Switzerland where he did his apprenticeship. Prior to coming to Korea, he worked across Europe and Asia in countries including England, Italy, Thailand, Malaysia, the Philippines, Hong Kong and China.

Graf is currently preparing for Oktoberfest, which the hotel will celebrate tomorrow and the day after. The hotel is offering a buffet with a large selection of German dishes, including pickled herring, roasted meatloaf and fruit cheesecake.