Japchae: A royal Korean tradition, but kings of old held the noodles

Japchae: A royal Korean tradition, but kings of old held the noodles 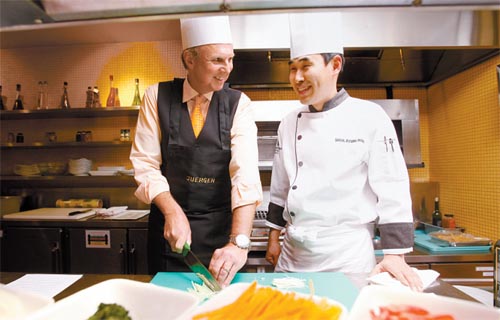 If you were to choose one of the many Korean dishes most commonly consumed on special days like birthdays and holidays, japchae would have to be a contender. The thin transparent noodle dish gets its name from how they’re served - mixed with vegetables. The Chinese character pronounced jap means to mix, while chae means vegetables.

“What other dish could be more perfect than japchae?” asked Sohn Byung-hoon, chef at the Grand InterContinental Seoul in Samseong-dong, southern Seoul. “It is highly nutritious with stir-fried vegetables and is also delicious.”

And it has a long pedigree, known to have pleased Joseon Dynasty (1392-1910) kings. During the 17th century, japchae, which was then cooked without noodles, was considered a royal food served to very high-level officials. The vegetables used at that time included cucumbers, radishes and mushrooms. It was only in the early 20th century that Koreans started mixing in noodles made from sweet potato and other starches.

“Based on my experience, it is often the case that dishes that are popular in Korea aren’t as popular in other Western countries, which proves that tastes are different,” Sohn said. “We must come back to what Mr. Koenig has emphasized: localization.”