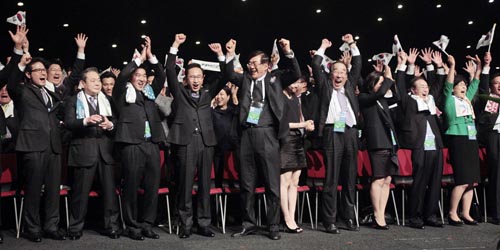 
Twelve years of hopes, dreams and toil were rewarded last night when Pyeongchang was chosen to host the 2018 Winter Olympics after failing in two earlier bids.

It beat out Munich and Annecy, France, in the first round of voting at the 123rd International Olympic Committee General Assembly in Durban, South Africa.

Koreans held their breath as IOC president Jacques Rogge mounted the stage at the International Convention Center, and when he announced the name of the small town in Gangwon, an entire nation cheered.

President Lee Myung-bak, who was in Durban to push the bid, shook hands with Korea’s committee after the announcement.

A crowd assembled at the base of Pyeongchang’s giant ski jump, where the opening ceremony will take place in February 2018, roared with excitement, and many people burst into tears of joy.

Pyeongchang was widely considered the front runner throughout the competition, but Munich put on a final spurt of sports diplomacy with an emotional appeal from bid head Katarina Witt, former two-time Olympic figure skating champion.

Ninety-five IOC members took part in the vote, and Pyeongchang received 63 votes, followed by Munich with 25 and Annecy with seven. 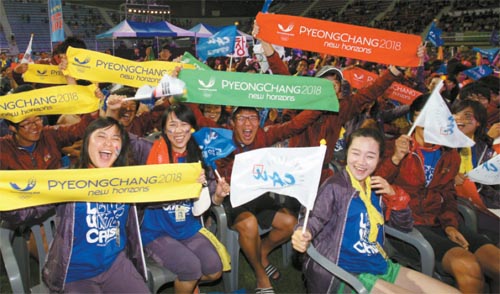 A group of Koreans cheer for Pyeongchang at Alpensia Ski Jump Stadium in Pyeongchang, Gangwon, yesterday. Pyeongchang beat Munich and Annecy, France, in a first-round vote to host the 2018 Winter Olympics. [YONHAP]


In 2003, Pyeongchang received 51 votes in the first round of voting to choose the host of the 2010 Winter Games, edging out Vancouver, Canada, with 40 and Salzburg, Austria, with 16. However, the Korean bid lost to Vancouver 56-53 in the following round.

The same misfortunes occurred in the IOC’s 2007 decision on the 2014 Winter Olympics. Pyeongchang led the first round with 36 votes, followed by Sochi, Russia, with 34 and Salzburg with 25. But in the second round, Sochi won 51-47.

This time it was different. Pyeongchang blew away its two previous failures by winning in the first round.

With the win, Korea is now the fifth nation in the world chosen to host four major international sporting events: the Summer Olympics, the Winter Olympics, the FIFA World Cup and the IAAF Athletic Championships.

Korea held the Summer Olympics in 1988 and then co-hosted the World Cup in 2002 with Japan. This August, the IAAF Athletic Championships is coming to the city of Daegu.

Sports pundits say that by hosting the Winter Games, which need solid infrastructure and stable economic support, Korea has stepped up as a strong sports nation in the world. It is also meaningful that the Asian nation broke through the dominance of winter sports by Europe and North America, which has been in place since the Winters Games started in Chamonix, France, in 1924. Japan is the only non-European or North American country to host the Winter Games, which it did in Sapporo in 1972 and Nagano in 1998.

Before the vote, Pyeongchang sent eight representatives for a final appeal to IOC members.

In the 70-minute presentation, including a 15-minute question-and-answer session, Pyeongchang emphasized its campaign theme, “New Horizons.”

In its two previous Winter Games bids, Pyeongchang dwelled on the theme that Korea is a divided nation and that hosting the Olympics could help ease tensions between North and South Korea.

However, that message was discarded this time.

Since announcing its third bid in 2007, and after it was named an official candidate city last year, Pyeongchang has been stressing its ambition to become an Asian winter sports hub.

Highlighted by its “Dream Program,” a project started in 2004 that invites young athletes from countries without a developed winter sports scene to visit Korea and experience winter sports, Pyeongchang has shown that it could bring the legacy of the Winter Olympics to the continent of Asia.

The city also emphasized that it had 87 percent support from the nation’s public to host the Winter Games, which was more than the other two competing cities.

The Korean government promised to fulfill all the needs of the IOC, and President Lee Myung-bak flew halfway around the world to Durban on Saturday to make the promise in person.

Pyeongchang also stressed that its two main venue clusters are compact and close enough to each other that athletes can move from venue to venue in no more than 30 minutes.