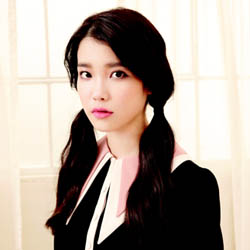 IU, the 18-year-old K-pop singer, spoke candidly about living in poverty leading up to her debut as a singer on a recording of the KBS show “Win Win” on Dec. 13.
IU, real name Yi Ji-eun, told the production crew that for a year she had to share a room with three family members. “Because my parents both had to work, I had to live with my grandmother away from my parents. In this tiny room, I lived with my grandmother, cousin and brother. It was always cold and we never had enough to eat.”

The singer’s grandmother sold hair accessories at a market in order to feed the family and IU hardly saw or contacted her parents. Despite the miserable upbringing the entertainer remained positive. “I found consolation in the fact that my grandmother was with me. Also as my house wasn’t so comfortable, I loved being at the studio where I had to practice. It was warm, had a bed and I could eat as much as I wanted.”

The singer also revealed that she endured more than 20 rejections over the space of a year before making her debut. The episode of “Win Win” will be broadcasted on Dec. 13.

IU’s second album “Last Fantasy” was released on Nov. 29 and 10 out of the 13 tracks featured on the album made it onto the top 10 most downloaded track on several music download sites.