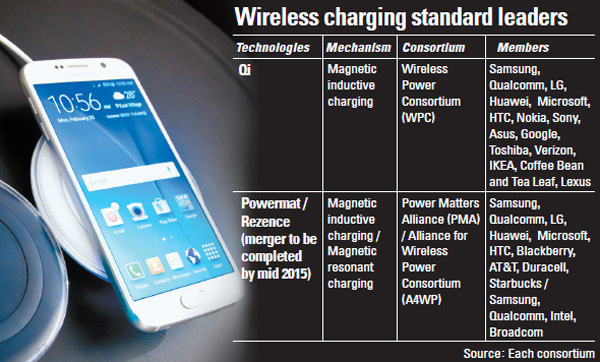 The wireless charging that Samsung Electronics is offering on its latest smartphones, the Galaxy S6 and S6 Edge, will change the way we live with our wireless devices.

Once you drop your S6 or S6 Edge on a small round pad, the charging starts - thanks to a built-in chip - and charging is fully completed in one or two hours. We can finally say farewell to the often unsightly plugs and wires that have been part of our homes and our routines.

The dawn of this phase of the wireless life is on April 10, when the new devices go on sale.

The smartwatch unveiled by Samsung rival Apple on March 10, the Apple Watch, has also adopted wireless charging. Speculation is already high that the follow-up to the iPhone 6 - either the iPhone 6S or iPhone 7 - will also charge wirelessly. 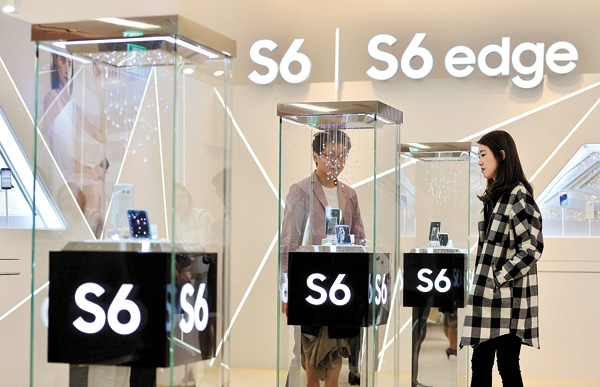 “The Samsung announcement is the first large step in 2015 for wireless charging in what looks to be a breakthrough year for the technology,” said David Green, an analyst with market researcher IHS Technology. “Whilst the adoption of wireless inductive charging into mobile phones is not itself a new concept, this announcement from Samsung provides a huge boost to the wireless power industry with its potential to drive market awareness and shipment volumes.”

According to Future Market Insights, a syndicated research report agency, the obvious benefits associated with the use of wireless charging are: efficiency of handling, protection from electric shocks, safe charging for devices that need to be waterproof, no need for maintaining cables and associated sockets.

The Qi standard, represented by the Wireless Power Consortium (WPC), has adopted the magnetic inductive charging format. An induction coil creating an electromagnetic field that comes in contact with another induction coil to transfer electricity has been around for well over 100 years. Qi is the standard that has the widest global distribution and penetration so far - from charging plates to automotive cradles.

Then there is the magnetic inductive charging format that uses a different wavelength, which is represented by a consortium called Power Matters Alliance (PMA). Its Powermat format gained prominence after Starbucks announced in January that it would begin using Duracell-backed PMA wireless charging technology in all 8,000 or so stores in the United States over the next 18 months.

Samsung’s S6 and its cousin S6 Edge have adopted a dual-mode receiver that is capable of receiving power from either a Qi or Powermat transmitter.

In January, the A4WP agreed to merge its charging specification with PMA “to accelerate the growth of this nascent market” by mid-2015, despite the different formats of the two.

“Consumers will gain access to an exciting and enhanced battery charging and power management experience sooner across the full spectrum of devices in daily use,” the two groups said in a joint statement. “Mobile network operators and commercial and retail brands can commit to the necessary investment confident of stable, long-term evolution and management of innovative wireless charging technologies.”

According to John Perzow, vice president of market development for WPC, 63 phones on the market as of last July supported the Qi standard, including those from Nokia, Google and Sony, whereas Google Nexus and LG phones had Powermat compatibility built into them.

Despite its present dominance, magnetic inductive technology has limitations that hinder its mainstream appeal. It only allows for a single device to be charged per coil, making it bulky and relatively inefficient in the multidevice world of today. It also requires the device to be precisely placed to be charged.

That partly explains why many have been underwhelmed by the wireless charging Apple and Samsung have come up with. To charge the Apple Watch, a user will still have to place a magnetic inductive charging device onto its back and Samsung’s charging pod is still sizable.

But it’s too early to conclude that Apple will stick with the cumbersome cable for the Apple Watch. Over the last decade, the Cupertino, California-based bellwether has filed several patents for wireless charging and in a 2012 patent filing, it described a near field magnetic resonant power supply “arranged to wirelessly provide power to any of a number of suitably configured devices.”

One thing for sure is Apple is not big on adopting someone else’s standards, according to Lucas Mearian of the Computerworld - as seen from its persistence to use its own Lightening connector.

“Apple has never bowed to a standards war. Apple does what they want,” the media quoted John Perzow, vice president of market development for the Wireless Power Consortium (WPC), as saying.

But that doesn’t necessarily mean the competition among Samsung, Apple and other smaller players will keep all our phones and chargers incompatible.

“Sooner or later a third party other than Samsung or Apple will come up with a charging system that supports all smartphones and wireless devices - regardless of their charging system format,” said a wireless-charging expert in Silicon Valley who asked not to be named.

Samsung and Apple’s contribution to introducing wireless charging to a wider demographic will revolutionize charging ecosystem and enormously enhance the “user experience.”

It will begin to replace the kind of batteries that have been taken for granted in devices like miners’ headlamps. Heavy batteries will be replaced with a small chip enabling wireless charging.

Also, a “drop and charge” mechanism is already available for many other wearable devices, making it possible for users to charge the without having them plugged in a USB cable or a charging dock. The technology will gain momentum once the distance problem is solved with a more flexible magnetic resonant charging format, according to experts.

“Eventually a unified system will charge all of your mobile and wearable devices the moment you enter your house,” said the source who runs a startup specializing in designing wireless charging solutions for wearables.