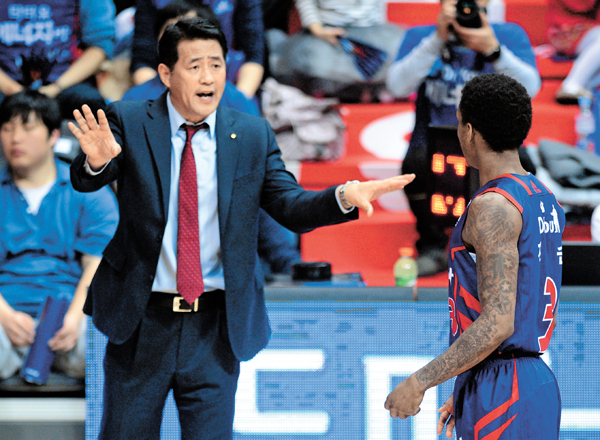 Goyang Orion Orions head coach Choo Il-seung never thought the day would come where he would be holding up a Korean Basketball League (KBL) championship trophy. But more than a decade after taking his first head coaching job, what once seemed an impossible dream has become a reality, as Choo led the Orions to the second KBL championship title in the franchise history.

When asked about the win, Choo said, “The first thought that came to my mind when the buzzer went off in the sixth round was that my day has finally come.”

He’s been imagining it for years but when it actually came, he says, it still didn’t feel real. After the victory, the team celebrated in a nearby restaurant. Although not much of a drinker, Choo had a couple of drinks that night for the first time in the season.

“I really can’t hold my liquor,” said Choo. “After having two shots of soju that night, I was in pain the next day.” He knew the next morning would be rough, but he wasn’t about to let that stop him from enjoying the night. He was so happy, he says, he wanted to cry his eyes out, and after going home to his wife that night, that’s exactly what he did.

Choo has always been considered unorthodox when it comes to basketball. Unlike others who began playing the sport early, Choo didn’t pick up a basketball until he was in his second year of high school. Hongik University High’s basketball team was short on players that year, due to financial troubles, and in a desperate attempt to recruit more players, the team’s coach zeroed in on Choo because of his height.

“I tried to duck the coach my first year,” said Choo. “I didn’t want to play. But during my second year, I looked at my report card and realized I wouldn’t be able to go to college with those kinds of grades. That’s when I realized I needed to do something.”

So began Choo’s long basketball career. Once he started to play, however, he soon grew fond of the sport. The first event Choo participated in was the national high school basketball championship, which was sponsored by Dongguk University. His team advanced to the finals and the game went into double overtime, but Choo’s team lost that day, placing second. Nevertheless, the sheer excitement and drama of it all made Choo fall in love with the sport. 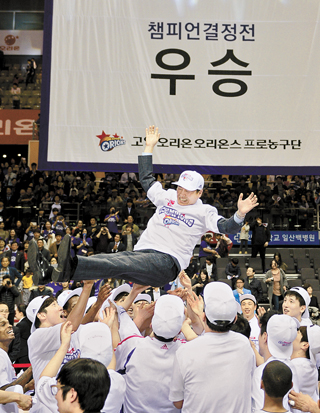 It was then that Major General Chun Doo-hwan staged a military coup. The 12.12 Military Insurrection, as it later came to be known, took place on December 12, 1979, establishing the Fifth Republic of South Korea and initiating a yearlong suspension of all sporting events. Choo decided to take the opportunity to train harder and eventually move to a high school with a more prestigious basketball program. But in 1981, he was held back again, this time by reinforced regulations concerning student player registration. After receiving a one-year suspension, Choo couldn’t participate in any further national championship tournaments. It was in this troubled manner Choo started down a path that would keep him courtside for the next 35 years.

When asked how Choo’s love of basketball can best be described, a close acquaintance of his commented that he is a type of person who could easily stay up all night talking about the sport. This passion was evident when Choo was relieved from the Busan KTF Magic Wings, the predecessor of the Busan KT Sonic Boom. Although dismissed from his post, he lingered by the court as a commentator. But his fervor for the game did not stop there. It extended to academic curiosity, too. Studying sports marketing in graduate school, Choo obtained a doctoral degree from Dongshin University with a dissertation related to professional basketball marketing in 2009.

Of course, there were times when he wanted nothing to do with the sport. After stepping down from his coaching position in 2009, Choo said he had no desire to return to the game.

“I felt useless,” he said, hinting at an underlying sense of doubt. But none of the obstacles or doubts he faced along the way could sever him from basketball.

Choo realized it in 2010, when he went to the United States to see the Final Four of the NCAA basketball tournament, the U.S. college basketball playoff. That was the year when the underdog team, Butler University, made it all the way to the Final Four to face off against the basketball powerhouse Duke University. Watching players from Butler University go neck and neck with Duke’s finest as seventy thousand fans cheered them on, Choo could not help but feel a gush of emotion.

“The entire city of Indianapolis was consumed when the Final Four took place,” recalled Choo. “Everyone I met talked about basketball and only basketball. That’s what made me realize, if I didn’t play basketball, if I didn’t have the love and passion for the sport, I would not been able to feel that enthusiasm and intensity.”

Choo hopes his legacy in the sport will end with the Orions.

“The Orions have yet to reach their full potential,” Choo said. “The team needs further development to truly do that.”

But he says he does not want to stay on as coach for too long. In fact, Choo hopes to retire and would like to see the old franchise star, and his assistant coach, Kim Byung-chul, eventually assume the role of head coach.

When asked what he would do after retirement, Choo said, “I have a few items on my bucket list. One of them is to leave the city and take up farming in the countryside. After all, isn’t life too short to spend it all on basketball?”