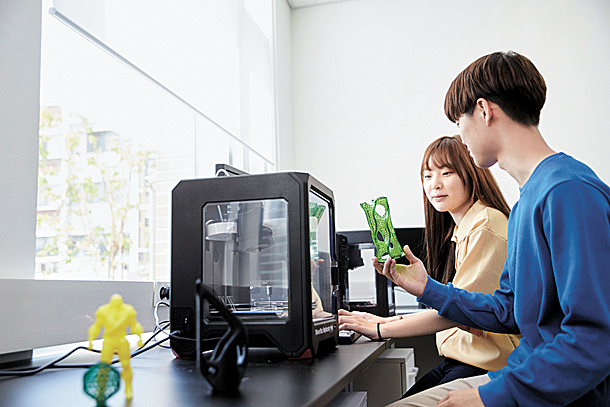 Adidas’ Speedfactory, with its robots and 3-D printers, is expected to create 160 jobs, according to the sportswear company, compared to a thousand or more jobs created at a typical shoe making facility in Asia.

Hanwha Techwin’s new factory in Changwon, South Gyeongsang, with machines that run 24 hours, can operate with half the workforce of its other factories, the company said.

With these statistics, it’s no wonder people believe the advent of smart factories could mean the loss of jobs.

A 2015 report by Boston Consulting Group about the effect of advanced factory technology on the German workforce estimates “a greater use of robotics and computerization will reduce the number of jobs in assembly and production by approximately 610,000.”

However, the consulting firm also noted that these job losses “will be more than offset by the creation of approximately 960,000 new jobs.” The new jobs, according to the firm, will be created from increased demand for highly-skilled workers in information technology, analytics and research and development, as well as newly created employment opportunities.

“Since there will be automation of all routine tasks, there will be job losses,” Henning Kagermann, president of Acatech in Germany, said in an email interview. “These can be overcompensated by growth opportunities under one precondition: that we have to invest in qualifications and training.”

As job demands are set to differ in the future, universities are crafting measures to help students adjust.

The ERICA Campus of Hanyang University in Gyeonggi is working with LS Industrial Systems to educate students in core technologies related to smart factories including user interface design for factory machines.