A modern take on the classic hanok

A modern take on the classic hanok 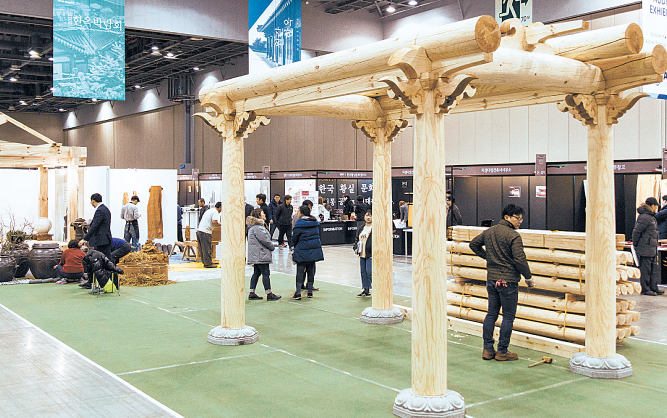 The 2018 Seoul Hanok Expo will open Thursday and run through Sunday at Seoul Trade Exhibition and Convention in southern Seoul. Above is a picture from the 2017 Seoul Hanok Expo held in February of last year. [SEOUL HANOK EXPO]

Open Thursday through Sunday, the 2018 Seoul Hanok Expo will take place at the Seoul Trade Exhibition and Convention (Setec) in southern Seoul, exhibiting various ways in which the hanok, or traditional Korean house, can evolve in the future by adding elements of modern technology while keeping its traditional values alive.

Organized by the Land, Infrastructure and Transport Committee, the expo will feature exhibits from some 300 different participants who will each present their take on how to use both the aesthetic and architectural values of hanok in solving environmental issues, such as the rising level of fine dust pollution in urban areas.

The expo will be divided into four main sections: construction, interior design, product and pattern design, and photography. From the design and building process to the furniture and interior design, the expo is a chance to learn more about building a traditional house in the 21st century.

“With rising concern for environmental issues, hanok has risen as an alternative option in residential environments,” said the organizing committee in a press release. “The exhibition and seminar is an event which looks deeper into the future development of hanok.”

The expo will include works by the winners of the fifth Modern Hanok Competition, held late last year, and, also, a seminar on building and maintaining a hanok on Sunday. The Korea Architecture Forum will be held on Saturday from 11 a.m. to 6 p.m., featuring four prominent architects who will each talk for an hour and a half on what good architecture is, including architects Joh Sung-yong and Choi Wook.

The 2018 Korea Bojagi Forum will also be held within the same venue in tandem with the hanok expo, providing an opportunity to see the beautiful colors and textures of bojagi (traditional wrapping cloth).

Admission costs 8,000 won ($7.40), and the expo will be open everyday from 10 a.m. to 6 p.m. Those who would like to participate in the seminar or other programs that require a reservation should visit www.hanexpo.co.kr.