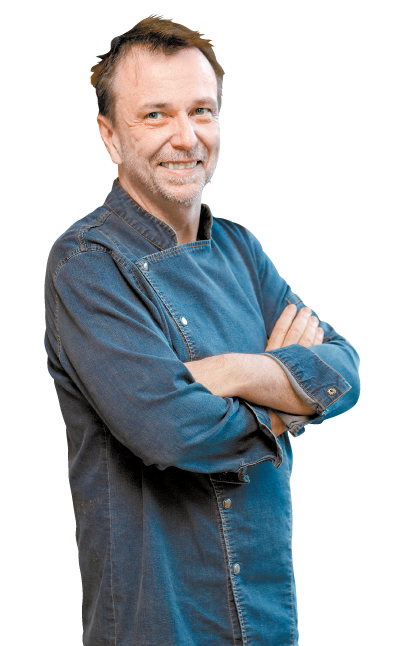 With an increase in the number of restaurants serving Southeast Asian food, some diners are going a step further. They are discussing what dishes best suits their tastes and what style is best for them personally when they choose where to eat.

To contribute to the debate and add a bit of fun, chef David Thompson - creator of Bangkok’s Nahm, No. 10 on Asia’s 50 Best Restaurant list and starred by the Michelin Guide Bangkok - recently returned to Seoul. He took the lead for the night at Long Chim, located at the hotel RYSE, Autograph Collection in Hongdae, western Seoul. Long Chim, the hotel’s Thai restaurant, was one of the most talked about additions to Korea’s Thai food scene last year.

The Seoul restaurant is Long Chim’s fifth international location. Thompson is the behind the brand and has opened three in Australia and one in Singapore. They are more casual than Nahm, whose kitchen he no longer manages, because he is planning a new project in Bangkok.

Last year, the chef demonstrated how his version of Thai food paired well with grilled chicken at a pop-up site set up at RYSE with Hong Kong’s Yardbird yakitori restaurant. This year, he was back to show how his food can be harmonious with dishes made with Korean ingredients. Chef Choi Hyun-seok of Seoul’s Choi. was his partner in crime. The duo hosted one dinner at Long Chim on Wednesday and another the next day at Choi., located in Gangnam District, southern Seoul. 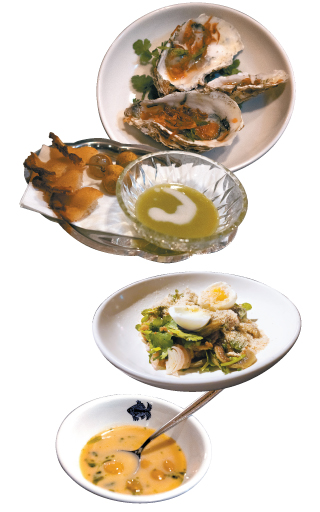 Some of the dishes served at the collaboration dinner hosted by David Thompson and Choi Hyun-seok at RYSE Autograph Collection Wednesday. The top three are Thai dishes by Thompson while above is Choi’s tom yum soup. [RYSE AUTOGRAPH COLLECTION, LEE SUN-MIN]

Small balls of minced chicken, pork and prawns simmered in palm sugar and put on pieces of mandarin orange and pineapple led the meal with simple sweet and salty flavors. They were followed by more savory and spicier dishes. Grilled mussels were marinated for half a day in coconut cream and smoked for an hour to make the dish more succulent, Thompson said. Eggplant salad, with eggs and dried prawns and served with rice and curry, upped the spice game and left a lasting impression before a crunchy crumpet dessert was served at RYSE.

While Thompson went full force to present Thai flavor, Choi added dishes in between, playful diversions from what some might consider to be Thai. Choi presented lobster tom yum soup, which tastes like a Western-style creamy lobster soup if you ignore the floating orange bubbles with all the tom yum flavor.

While open to mix and match his food with chefs specializing in other cuisines at collaborative events, chef Thompson remains a bit of a traditionalist even after his 30-year career of cooking Thai food. He calls himself a purist when it comes to cooking Thai and brings dishes from the center of the country to the table. He says the food from this area intrigues him more than food from anywhere else in Thailand. The new generation of chefs in Thailand are generally seeking ways to stand out with their own mix of Thai and some other cuisines, or even more modern-style Thai food.

“There is a greater clarity and depth [in traditional taste], and I don’t feel restricted by it because there is such a versatility and such a broadness of the repertoire,” said Thompson. “I like the traditional, old-fashioned tastes, and [I think] food from the past is far better than some of the stuff that’s around now.”

Thompson, originally from Australia, reads old cookbooks to trace the origins of contemporary Thai food. Even for a chef who can read and write Thai, deciphering the old books has not been an easy task. He said it took a while for him to become comfortable enough to use the recipes with a degree of certainty and success.

One of the main ingredients that could spawn a wide range of dishes is curry, the chef said. The exact taste achieved depends on which paste is used and what fruit or syrup is mixed in. The possibility of making a variety of dishes with one idea has kept Thompson focused on traditional-style Thai food for 30 years. Something “interesting and something unpredictable” about the Thai cuisine keeps him on focused on the cuisine of the country.

“I still have the same joy of cooking as when I first started cooking,” said Thompson.

Moving beyond Nahm, he is now on course to open a new spot that highlights his expertise accumulated over time, from his first Thai restaurant in Australia, Sydney’s Darley Street Thai, through to the establishment of Nahm.

Thompson said the restaurant is “a kind of a new Nahm.” The new spot, which has yet to be named, is set to open in September. It could be an “incarnation” of all the restaurants he created before, he said. At the new establishment, he will work with the ingredients rather than toying too much with the lineup itself, saying that he will continue to stick with the traditional recipes.

“I don’t think I can improve upon the structure of the menu, which is very traditional,” said Thompson. “The only thing we can do with the new place is to add selection of ingredients that have become far more organic, far more diversified and far more specific.”