[ICONIC FOOD] The new year is greeted with a venerable soup: On Seollal, Koreans eat tteokguk and there are a range of varieties

[ICONIC FOOD] The new year is greeted with a venerable soup: On Seollal, Koreans eat tteokguk and there are a range of varieties 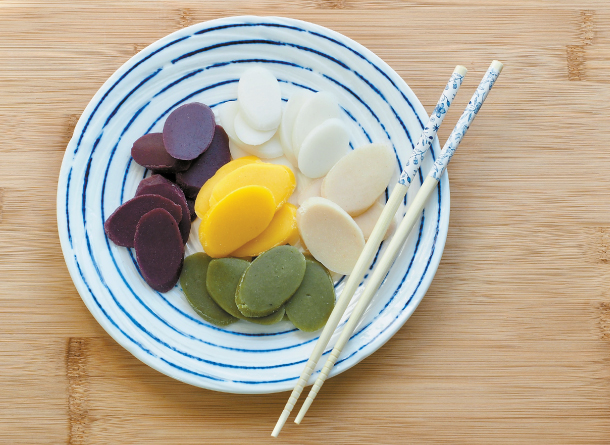 Tteokguk, a soup made with sticky rice cakes called tteok, is a dish people eat on New Year’s Day, when every Korean gets a year older at the same time. People who are sensitive about their age refuse to eat a bowl. Young kids ask if they will gain two years if they eat two bowls.

The reason tteokguk is eaten on the first day of the new year, a custom historians trace back to the Joseon Dynasty (1392-1910), is the symbolism involved. The tteok used in tteokguk is sliced pieces from a long, white rice cake. Eating something long is considered auspicious and can lead to a longer life.

It is also said that the sliced pieces resemble coins from the Joseon era. Eating the soup is a prayer for prosperity. The white color of the tteok and clear broth used in the soup also signify getting your body and mind refreshed for the new year, which makes the soup a popular choice for people who want to abandon bad habits from the year before.

“Back in history, tteokguk was widely enjoyed at houses of aristocrats,” said Joo Young-ha, director of the Academy of Korean Studies, adding that Seoul’s aristocrats set many trends that were picked up by people from different regions and social classes, who wanted to emulate them. “The custom grew wider when the media in the 1960s wrote stories about the food to eat on New Year’s Day and that imprinted the idea on many that they should eat tteokguk.”

The classic style of tteokguk is simple to make. The broth is made from seafood like dasima (dried kelp) and a handful of anchovies or beef. Tteok and dumplings are added and then the soup is garnished with steamed vegetables or fried egg slices. There are variations, but tteokguk is usually not spicy and always features tteok.

The simplest variation is joraengi tteokguk. It uses a type of tteok called joraengi, which looks like small snowmen. The particular style was popular in Kaesong, now in North Korea, and the tteok tends to have a chewier texture. It is popular with people who prefer fatter tteok rather than the flat ones.

Tteokguk is included on the tables filled with food for a family’s ancestors on New Year’s Day. Even in the days when rice was considered a luxury, getting a bowl of tteokguk on the New Year’s Day was a must, according to Lee Myung-sook, president of Institute of Traditional Korean Food.

She explained that some people in Kaesong, which was the capital of the Goryeo Dynasty (918-1392) before the establishment of Joseon, made the labor-intensive type of tteok as a way to vent their anger and sadness at having lost their country.

The traditional soup that ushers in a new year has variations developed in different regions. From left: the common style with beef broth and slices of tteok (sticky rice cake); tteokguk (soup with tteok) made with oysters; tteokguk made with joraengi tteok, a type of sticky rice cake shaped like a snowman; tteokguk served with dumplings. [JOONANG ILBO]

Another theory is that the mercantile nature of Kaesong’s people prompted them to make tteok that looked like a stack of coins. Again, it was supposed to lead to greater wealth.

Another variation on tteok is seen in the region of Chungcheong. Called saeng tteokguk, or fresh tteokguk, it uses freshly-made chunks of rice dough instead of tteok. Since it takes time to make tteok, such fresh dough was used in the area to save time. The texture isn’t as sticky and is softer.

There are some unique types that families make at home. Most variation reflect ingredients found in the region. People in South Gyeongsang, an area known for its oysters, add oysters to the soup.

People in Jeolla are known for chicken broth-based tteokguk. They add broth with chicken marinated in soy sauce and some dasima, and keep it in the refrigerator for a few days. Called dakjang, or chicken sauce, it is added to a pot with water, boiled and then tteok is added. They often add steamed tofu on top.

A style originating in Gangwon is a bowl with dumplings, and that style has spread across the peninsula. Some prefer to just make tteokguk with only a few slices of tteok and lots of dumplings.

To make tteok chewier in the soup, make sure to thaw frozen slices first. If you add tteok straight from the freezer, the texture becomes softer.