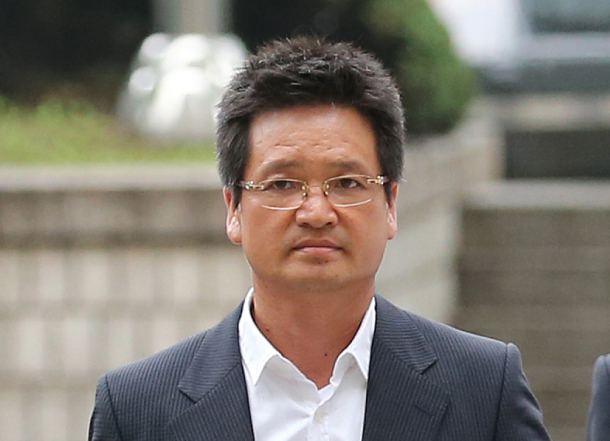 Prosecutors nabbed a key figure implicated in the sex scandal surrounding former Deputy Justice Minister Kim Hak-eui on Wednesday as they dig deeper into the case, which is suspected to have been covered up by the previous conservative administration.

Yun Jung-cheon, who previously led a construction company, was arrested at around 8 a.m. on Wednesday at his daughter’s house in Seocho District, southern Seoul, on charges of aggravated fraud and aggravated influence-peddling. Yun was taken to the Seoul Eastern District Prosecutors’ Office for questioning.

Prosecutors said they plan to soon request that a local court issue a detention warrant for him, citing the possibility that he may try to destroy evidence.

Prosecutors said the investigations surrounding Yun were part of a wider probe targeting Kim, but decided to focus on Yun’s personal allegations for now. That is why prosecutors have yet to charge Yun for bribery or any sex-related crimes, which are considered the center of the probe.

Kim served as deputy justice minister for just six days in the Park Geun-hye administration in March 2013. He resigned over allegations he attended a number of parties thrown by a contractor who hired women to have sex with high-profile figures to gain business favors. That contractor was Yun. The scandal evolved into a drug-and-rape case when a woman claimed she was drugged, raped and videotaped by Kim and Yun. Prosecutors opened a probe at the time but later dropped it, citing a lack of evidence. A special commission under the Justice Ministry, which launched after the Moon government came into power in 2017, reopened it recently, which led to Yun’s arrest on Wednesday.

When Yun was questioned in 2013, he denied any links to Kim. Yun, however, is said to have changed his stance when he was recently called in by prosecutors, saying he gave Kim money and other valuables, though it’s not known when or for what reason.

Prosecutors are essentially searching for clues that Yun bribed Kim, but the statue for limitations for bribery is 10 years, meaning prosecutors will have to find evidence Yun bribed Kim after 2009.

On the latest allegation of aggravated fraud, prosecutors said they received testimony from employees of the company Yun formerly helmed, who claimed that Yun embezzled an “enormous” amount of corporate money and used it personally. Yun was fired in May 2018.