[Perspective]Rocker chases his reflection in Korea

[Perspective]Rocker chases his reflection in Korea 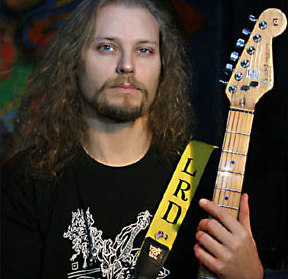 Many expats of the Western persuasion, including myself, find it difficult to swallow the saccharine K-pop that is constantly oozing from Korean speakers. Canadian guitarist Lance Reegan-Diehl, however, has been busy serving it up.
A hard rocker with his own group, LRD Band, Reegan-Diehl has infiltrated the K-pop scene. He played behind BoA, the local singer most commonly associated with the phrase “big in Japan,” for two years. “The people I’ve worked with will have worked in the States,” he said. “The producer of that act will take that and use it in their publicity, the fact that some of their album was done in New York or Los Angeles, then they try to convey that feeling by putting me in a video, or having me tour with them.”
But he’s quick to point out that the foreigner novelty factor will only get you so far. “Seoul’s a big city. You don’t just walk over here and say, ‘Hey. I’m a foreigner. I can play.’”
Having spent part of the ’90s playing in hotels around the world, Reegan-Diehl ended up with a Korean record company, and has been here since 2000. As is often the case with people who pass through and end up staying, his wife is Korean.
He’s touring in Europe in March, but he’ll come back when he’s through. “We’ve got the opportunities here. No use in dropping it and starting fresh,” he said. “This is where I’m based; it’s where I live. ... I look to go work anywhere, but at the end of the day I come home to Korea and hang my hat up here.”
Before saying goodbye, Reegan-Diehl adds, “Wait, I got it. My wife’s mom makes great kimchi, man! Just kidding.”
Reegan-Diehl recently put out the album “Chasing My Reflection.” Learn more at www.LRDmusic.com.