Mozar, a Q-Max LNG vessel built by Samsung Heavy Industries, sits in Geoje Shipyard, South Gyeongsang. The vessel is to be christened on Friday. By Cho Jae-eun

But its heartbeat was strong. Geoje Shipyard, Samsung Heavy Industries’ massive yard there, was filled with thousands of employees in white jumpsuits and matching helmets on Monday.

As they wiped the sweat from their brows under a sweltering sun, they inspected the vessels at the site, Samsung Heavy Industries Co.’s second largest in Korea.

“There are around 20,000 people working here every day,” said Luis Benito, manager of the Korea Business Development Team at Lloyd’s Register Asia. His company overlooks the inspection and certification of ships, including Samsung Heavy’s. 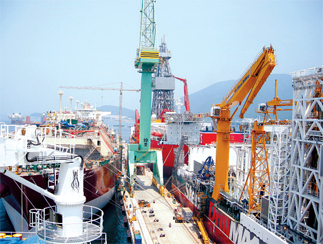 Workers at the Samsung Heavy Industry’s Geoje shipyard, the company’s biggest in Korea, are busy at work on Monday. By Cho Jae-eun

The shipyard is going to christen its latest pride and joy this Friday: the world’s biggest liquefied natural gas carrier ever to be built. The finished tanker, Mozah, will be delivered in August to Exxon Mobil Corp. in Qatar. Mozah is the first of 11 such vessels under-construction at Samsung Heavy.

The vessel will supply LNG more efficiently and at lower prices to its customers in the United States and the United Kingdom compared to standard LNG carriers.

Because it is able to carry more LNG at one time, Q-Max LNG vessels save money.

“In all, the Q-Max cuts transport costs by up to half,” said C.H. Park, executive vice president of the project planning division at Samsung Heavy. “I think I can say that the Q-Max’s scale will be the maximum in size for this type of vessel for the near future.”

The Q-Max also burns less fuel and has a cargo re-liquefaction plant on board. This plant returns the LNG cargo that it uses as fuel during the voyage back to the storage tanks. Without this plant, regular LNG carriers arrive at ports with only around 95 percent of its cargo, burning off 0.14 percent of cargo a day, The Q-Max returns with 100 percent.

The carrier also has two engines and shafts for maximum propulsion safety. Its underwater coating, with an anti-fouling system, is also friendlier to the marine environment and does not release any harmful chemicals into the sea.

Samsung Heavy signed the contract to build this carrier in 2005 with Qatargas, the state-dominated Qatari gas provider. Qatargas aims to be the world’s largest producer of LNG by 2010.

“At the moment, Korea is the only country in the world that has the technological capability and skill to build these tankers,” said C.H. Park.

The Q-Max is technically challenging and sensitive, as it can load only in specially built terminals in ports. “It was one of the most challenging projects for us,” said Lasse Mikkelsen, senior surveyor and project manager at Lloyd’s Register Asia.

The vessel had been under construction for 16 months, with its steel-cutting finished in April.

Even with the global surge in the prices for energy and raw materials, Park was cautiously optimistic about the future of the Korean shipbuilding industry. Continuing the industry’s success from last year, Park said that although this year compared to 2007, the company saw less orders, it expects a jump next year. He added that the depreciation in the Korean won helped business.

Although the rapid growth of the Chinese shipbuilding industry is alerting other industry leaders, Samsung Heavy seems confident. Samsung Heavy specializes in building high added-value vessels, including drilling ships and LNG carriers that depend on relatively fewer raw materials.

LNG tankers make up 30 percent of the company’s revenue. “We don’t build bulk carriers. Samsung Heavy is dominating the field of technology-oriented ships at the moment,” said Park.

Park also mentioned that if steel prices see another increase and go to $200 per ton, or around 20 percent of the current cost, leading shipbuilding companies would see profits disappear altogether.