Something alluring stays on art street

Something alluring stays on art street

The Insadong gallery street in central Seoul is crowded with people on weekends. By Oh Sang-min

Some say the main street of Insadong, once known as the biggest center for antiques and contemporary art trading in Korea, is no more than a tourist spot now, filled with souvenir shops, cafes and restaurants. Critics point out that many antiques stores have disappeared and that major art galleries have relocated to areas near Samcheong-dong, north of Insadong, or to Cheongdam-dong in southern Seoul.

Still, about 100 art galleries stand close together on Insadong’s main street, more than any other street in Seoul, according to the Jongno District Office. And these galleries are trying different strategies to appeal to beginners in art collection - those who have relatively light purses but a fresh interest in art. Samcheong-dong has emerged as a new cultural hot spot while Cheongdam-dong is known as a luxury shopping locale. Unlike Insadong, galleries in those neighborhoods focus on wealthy connoisseurs.

Gallery Topohaus, an art and design gallery with three exhibition rooms in Insadong, is at the forefront of the area’s revival. A gallery show window attracts the eyes of passersby with its red heart frame and small paintings. This is the gallery’s “art gift shop,” which opened on the building’s first floor earlier this year.

Most of the artwork displayed there, including oil paintings, lithographs and photographs mostly by emerging young artists, sell for less than 1 million won ($646) apiece.

“Young people who felt that the threshold for art galleries was very high now feel free to enter our gallery after seeing small paintings through the show window,” said Han Jin-sook, a curator at Gallery Topohaus. “Paintings are popular, especially as wedding gifts.”

“I hope someday it will become common for people to exchange paintings as gifts and that companies give paintings instead of galbi [beef rib] sets to their customers as gifts,” said Oh Hyun-gum, the director of Gallery Topohaus. “And I want this gallery to be the place where anybody can come and enjoy art.”

vKorea’s art market has been hit hard not only by the economic downturn but by a recent scandal. Han Sang-yool resigned as head of the National Tax Service in January amid allegations that he offered an expensive painting as a bribe to his predecessor.

“Art collection is spreading among young people, whereas art collection was regarded as a hobby exclusively for old rich people in the past in Korea,” she added.

Insadong is also home to Ssamziegil, a complex of small art galleries and handicraft shops, across the street from Gallery Topohaus. The complex, opened in late 2004 by Ssamzie, a company that manufactures accessories and trade artwork, has greatly helped Insadong attract young people.

The complex, with a courtyard for outdoor exhibitions and an underground gallery, is always crowded with local teenagers and college students as well as foreign tourists who want to take snapshots with artwork in the background. The complex has many stores which can be regarded as mini museums, such as the aptly named Miniature Museum on one corner of the first floor. It also sells miniature models of Korean food, which are especially popular with Japanese tourists.

“About 70 to 80 percent [of customers here] are Japanese tourists,” said Jang Hui-jae, manager of the store.

In the northern part of Insadong’s main street is Gana Art Space. The gallery recently hosted a joint exhibition of two pop artists on its second floor.

As visitors examined the paintings, two young men approached them, offered snacks and began to explain about the art. Turns out these young men were the artists themselves.

This wasn’t abnormal for Insadong, as young artists apparently relish these interactions.

The area also has art galleries with long histories, such as Sun Gallery, which started as a one-story building in 1977. It now has four stories above ground and one below.

“We deal with mainly artists in their 40s or older with some name value, rather than young emerging artists,” said Jo Min-jung, a curator at Sun Gallery. “We have a separate gallery for young artists in Sagan-dong [near Samcheong-dong]. The prices of works by even renowned artists have declined sharply from the 2007 peak with the economy slowing down. But now, many of our old customers think it is time to buy artwork at relatively low prices.”

How has the main street of Insadong become the center of trading antiques and contemporary art? 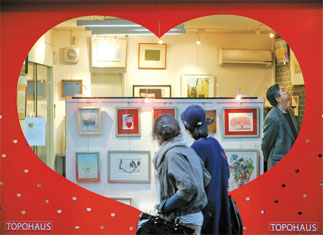 Gallery Topohaus’ show window displays small paintings that attract the eyes of passersby on the street. By Oh Sang-min

The street was associated with art even in the Joseon Dynasty, according to Insa Traditional Culture Association Corp.

“Dohwaseo, the government-based royal painting institute of the Joseon Dynasty, was located on Insadong Street,” a senior official of the association said. “So it naturally became a center for traditional art and antiques. And in the 1960s and ’70s, it became a center for contemporary art as well, with art galleries being set up one after another.”

“Insadong is still the biggest art center, with more galleries than other areas,” he emphasized. “And it is turning younger rather than withering.” 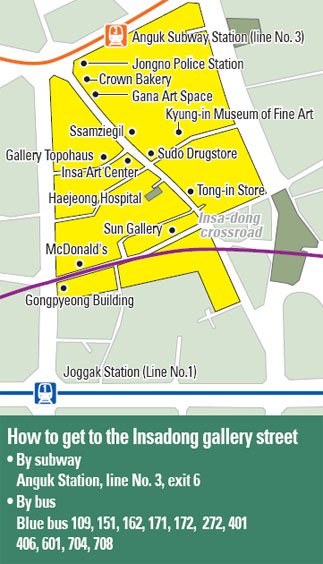 Most art galleries in Insadong street are open throughout the year, except for the nation’s biggest holidays, such as Chuseok. But some galleries, such as Sun Gallery, are closed on Sundays. Galleries’ hours vary, but in general, many open at 10 a.m. and close at 6 or 7 p.m.

Art galleries in Insadong tend to start most new exhibitions on Tuesdays or Wednesdays.

“This is an old custom of Insadong art galleries,” said a gallery official.


Glimpse of Business in Seoul