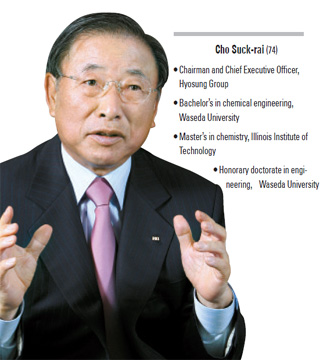 It might be a bit difficult to imagine now, but many of the nation’s largest, most well-known companies started off as relative unknowns in the business world before making it big.

Hyosung Group, a local industrial conglomerate specializing in chemical textiles and heavy machinery, is no different. The company started out as a humble, little-known firm that produced chemical fibers.

In 1966, Cho Hong-jai, the group’s founder, established Tongyang Nylon, thinking that the high-growth industry would contribute greatly to the nation’s overall economic development. Compared to other founders of local conglomerates, Cho started his own business relatively late at the age of 60, as he had pursued other business ventures when he was younger. 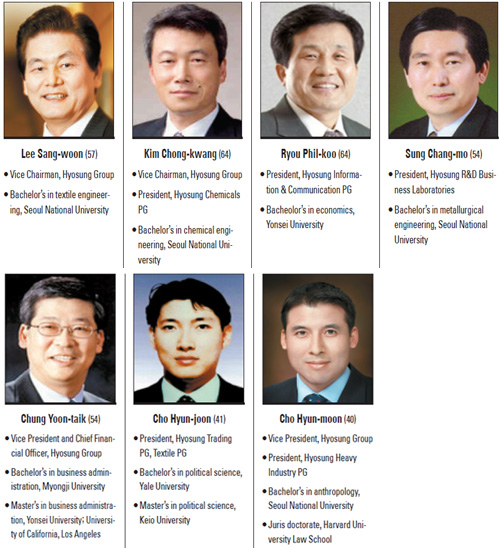 But after some years Cho and Lee parted ways due to some differences in management between the two men.

After establishing Tongyang Nylon, Cho merged with, acquired and even established new businesses to expand the chemical textile company. In 1970, Cho acquired Hanil Nylon and opened the nation’s first research and development center as a private company the following year. In 1975, the fiber firm acquired Hanyoung Industries Company - a maker of transformers, circuit breakers and electric generators - to stretch its business into the electric power sector.

The small firm that became the foundation of the Hyosung Group diversified into a wide array of business sectors. In addition to producing fiber and chemical fabrics like polyester and spandex, the company also began manufacturing tires, industrial products, carpets, pet bottles and packaging materials. The company is now involved in everything from heavy industry, construction and engineering to information and communications, power systems and renewable energy.

The nation’s 33rd-largest conglomerate based on total assets as of April, the company is the world’s leading maker of tire material and second-largest maker of spandex. Not too shabby for what was once a tiny nylon business.

Hyosung - which means “morning star,” a reference to expectations that the nation will have a prosperous future - is currently divided into seven “performance groups,” dubbed PGs: textiles, industrial materials, chemicals, power and industrial systems, construction, trading and information and communications. The PGs are then subdivided into 23 business areas called performance units, or PUs. For instance, under the Industrial Materials PG, there are three PUs including fabric products, technical yarn and tire and industrial reinforcements.

Instead of having many subsidiaries, Hyosung decided to adopt the PG and PU systems in an effort to realign the organizational system based on performance management. As part of a restructuring after the Asian financial crisis, the group consolidated four companies - Hyosung T&C, Hyosung Corporation, Hyosung Living Industry and Hyosung Heavy Industries - into one under the umbrella of the Hyosung Group.

The group currently has roughly 17,000 employees and generates annual sales of around 7 trillion won ($6 billion).

The leader behind all these diverse businesses is chairman Cho Suck-rai, the eldest of the founder’s three sons. The founder’s second-oldest son is Cho Yang-rai, chairman of Hankook Tire, while his third son, Cho Wuk-rai, is chairman of Dongsung Development.

After graduating from Kyunggi High School, Cho Suck-rai earned a bachelor’s degree in chemical engineering at Waseda University before getting his master’s at the Illinois Institute of Technology. It’s been said that his long-time dream was to become a professor.

Cho started out as a standing auditor at the fabric company and eventually worked his way up to become the company’s chief executive and president in 1981. The chairman is very active in social and business affairs and chairs the Federation of Korean Industries as well as the Korea-Japan Economic Association.

One of his top executives is Lee Sang-woon, vice chairman of the Hyosung Group. Lee is known to be a “Hyosung Man,” as he has been with the company since 1976. He is now in charge of the group’s operations and focuses on creating global networks and new growth engines.

Kim Chong-kwang, vice chairman of the Hyosung Group and president of Hyosung Chemicals PG, started with Tongyang Nylon in 1970. Having studied chemical engineering at Seoul National University and with almost 40 years of experience in the industry, Kim leads the group’s chemical materials sector.

Chung Yoon-taik, chief financial officer of Hyosung Group, was placed in his current position in 2002. Chung is in charge of the group’s budget and capital. Chung’s responsibilities have grown recently, as Hyosung submitted the only bid for a major stake in Hynix Semiconductor in September.

But that’s where some of the company’s current challenges lie. The effort to buy a stake in Hynix has put the conglomerate in an unstable position. Hyosung doesn’t have any experience in the memory chip business, and observers also question whether the company has the budget to buy Hynix’s shares. Hynix’s total assets are valued at around 13.4 trillion won, whereas Hyosung’s are valued at 8.4 trillion won. The value of the bid for the stake - 28 percent of Hynix shares - is estimated at around 4 trillion won.

Many market watchers wonder whether Hyosung will be able to buy the shares as planned. “Hynix is too big for Hyosung and will likely be a burden,” said Park Dae-yong of Hyundai Securities.

The group is also going through a crisis over various allegations, including ones that it created slush funds through subsidiaries at home and abroad.

Cho Hyun-joon - the eldest son of the present chairman and the president of the group’s Trading PG and Textile PG - allegedly bought a $45 million luxury home in the United States in 2002. Some observers suspect that he used the illicit funds to buy the home.