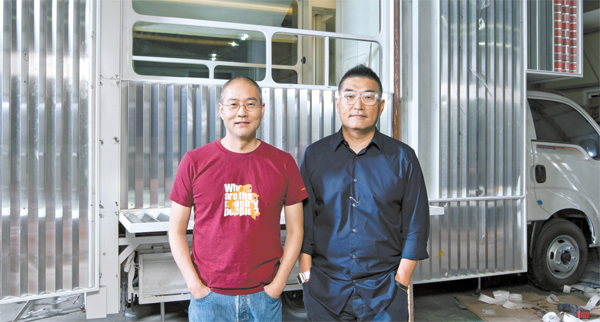 Do Ho Suh, left, with his brother and collaborator, Eulho, with the “In-Between Hotel” truck nearing completion in Paju, Gyeonggi, on Tuesday. By Park Ki-su


There are two kinds of tours, says renowned installation artist Do Ho Suh.

One we immediately associate with sightseeing; it moves from one famous attraction to the next. The other, less common, explores the areas in between landmarks.

For travelers who prefer the latter, the 50-year-old Korean artist - based in New York, London and Seoul - offers the “In-Between Hotel,” part of the 2012 Gwangju Biennale that starts tomorrow.

“In-Between Hotel” is a tiny hotel room inside a truck. It will appear in between houses and shops, here and there throughout Gwangju.

The interior is not markedly different from ordinary hotel rooms, with a bed, TV, toilet and minibar. But on the outside, it is a truck covered with patterns of brick and slate “to quietly merge into the neighborhood of Gwangju citizens,” Suh explained.

He talked about the new project with the Korea JoongAng Daily at his Seongbuk-dong office in northern Seoul last week.

Suh Architects, led by the artist’s brother, Eulho Suh, has designed the interior and exterior of the “In-Between Hotel.” Collaborators include Kia Design Center of Kia Motors, which sponsored the project, and video and multimedia company Imagebakery, among others.

Anyone who makes a reservation for the hotel on its Web site (www.inbetweenhotel.com) can stay in it for one night for free. When the guest goes to a location designated by the Web site, a staff member of the “In-Between Hotel” will appear there and bring the guest to the truck, perhaps parked in a narrow space flanked by ordinary structures. Once the guest checks out, the hotel will go to a different location. 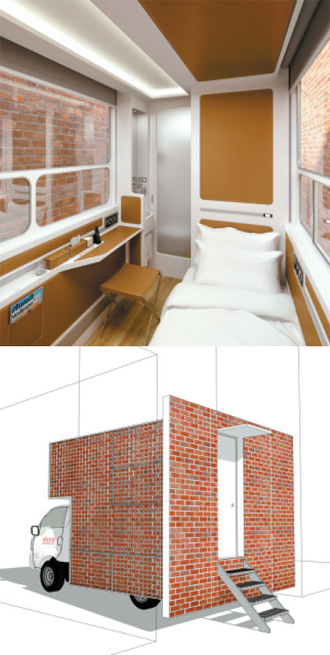 Top: “In-Between Hotel’s” interior. Above: The hotel’s concept rendering.Provided by the artist and Suh Architects

Why is the artist interested in nameless “in-between” spaces?

“Travelers to Gwangju, like travelers to other places, will look for historical landmarks first,” said Suh. “But the city simply would not have existed without the space and time in between those historic places and landmarks. So some travelers, like me, find joy in exploring those in-between spaces and times.

“The hotel, in accordance with its name, will locate in two layers of in-between spaces; it will squeeze in between two buildings, which are in nameless spaces in between famous sites.”

The project, which will continue even after the Gwangju Biennale ends Nov. 11 and might travel to other cities, evolved from Suh’s installation work “Bridging Home,” which he presented at the 2010 Liverpool Biennial in the United Kingdom.

It was a fully formed hanok, or traditional Korean housing, designed to look like it has dropped from the sky and been wedged between two rundown warehouses on a street of the port city. It represented a clash of cultures that the artist felt many times since he left Korea to study in the United States in the early 1990s.

As for “In-Between Hotel,” a visitor will come out of the hotel truck, instead of a house dropped from the sky, and interact with people who have become his or her temporary neighbors, overcoming big or small culture clashes.

Such interactions and active human participation, Suh pointed out, are the biggest difference between the “In-Between Hotel” project and his “traveling homes” installation works. “It is important that there are also humans in the nameless spaces and the hotel guests will interact with them,” he said.

Houses and shops near the hotel truck will become not only temporary neighbors of “In-Between Hotel” guests, but also providers of various services, such as dining. “So they, too, become parts of ‘In-Between Hotel,’ ” the artist said.

A guest who enters the hotel room could check his or her neighbors and owners of nearby shops through a kiosk linked to the television set. The visitor can read neighbor’s greeting messages at the kiosk. The guest also can learn the stories of previous guests. 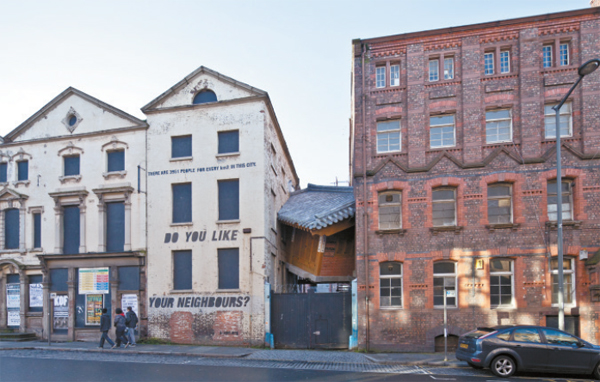 ‘In-Between Hotel’ project is an evolution from Suh’s installation work “Bridging Home” he presented in the 2010 Liverpool Biennial in the United Kingdom. Provided by the artist


Guests of the “In-Between Hotel” will have atypical views about Gwangju. In addition, the hotel could even change the perspectives of Gwangju residents about the city, said Suh.

“From when the residents were informed that a hotel would come into an empty lot next to their houses, to which they had paid little attention, they must have begun to see the lot with a new perspective,” he said.

“And when the ‘In-Between Hotel’ actually comes into the lot, the site will transform into a completely new space, both physically and psychologically.

“Even after the hotel truck moves to another location, that space will no longer be the same as it will contain new memories. ‘In-Between Hotel’ will present a new face of Gwangju for those already living in the city.”

“It shifts into various appearances depending on the context of time and space or even the psychological context of its participants,” he said.

Given that “In-Between Hotel” is part of Gwangju Folly Projects, the work is a very bizarre folly. A folly, by definition, refers to a building constructed mainly for decoration with little practical use. Accordingly, follies tend to become monuments.

“ ‘In-Between Hotel’ resists becoming a monument which will be independent from its surroundings and will be permanent,” Suh said. “With its mobility and the attraction of citizens’ participation, ‘In-Between Hotel’ will be an anti-monument that will actively relocate from one context to another.”

The work is related to the artist’s long anti-monument interest, which also was seen in his earlier works like “Public Figures.” The sculpture depicts small human figures bolstering a big pedestal on which there is nothing, in dramatic contrast with traditional European monuments in which a great human figure stands on a high-rising pedestal.

“In-Between Hotel” is also related with Suh’s long interest in re-contextualizing of homes. “Well, it is so natural for me, a man who would stay at hotels for one-third of every year, to deal with a hotel after a home,” said the artist, laughing.

His recent solo show “Home Within Home,” at Leeum, Samsung Museum of Art, in central Seoul, was also related. The exhibition, held March 22 to June 3, attracted some 101,200 viewers, more than any exhibitions held by the nation’s biggest private art museum. The show featured life-sized sculptures of hanok apartment units and others. As they were made of translucent fabric, they looked like mirages or ghosts, despite the elaborate details.

“The works are minimal representations created to evoke the memories, ambience and other non-physical aspects of my past homes. Through these works, the homes have been relocated from their former contexts into a museum space, a new context, giving them new meaning,” Suh said at the time.

The artist, who is interested in “in-between time and space,” is also preparing an art project related with the Hamnyeongjeon of Deoksu Place in central Seoul, which tells the history of the end of the Joseon Dynasty. It will be unveiled the middle of this month.

“Just as people look for famous sites in travel of a physical space, they also move from one major incident to another in journeys of time into history and memory.

“In reality, however, vast time and space exist in between connecting those dots of historical incidents and famous sites. I focus on these in-between things,” he said.