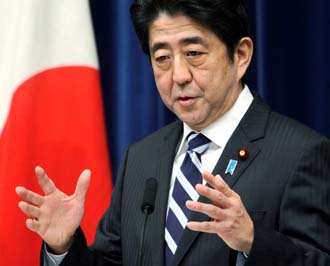 The Japanese government has decided to set up an exclusive department within its cabinet secretariat to deal with territorial issues including its claims over Dokdo, Korea’s easternmost islets, Japan’s state-run broadcaster NHK reported yesterday.

The move comes ahead of Japan’s celebration of Takeshima Day on Feb. 22 - Takeshima is Japan’s name for Dokdo - for the first time in the second term of rightist Prime Minister Shinzo Abe.

Having a department under the cabinet secretariat shows its importance and the efforts Japan is putting into its territorial claims.

“The government is planning to strengthen its system of publicizing the Japanese stance on the various territories,” Okinawa and Northern Territories Affairs Minister Ichita Yamamoto was quoted as saying by NHK. “The current team within the cabinet secretariat in charge of the Takeshima islands will be expanded and will tighten coordination with other government sections on its claims.”