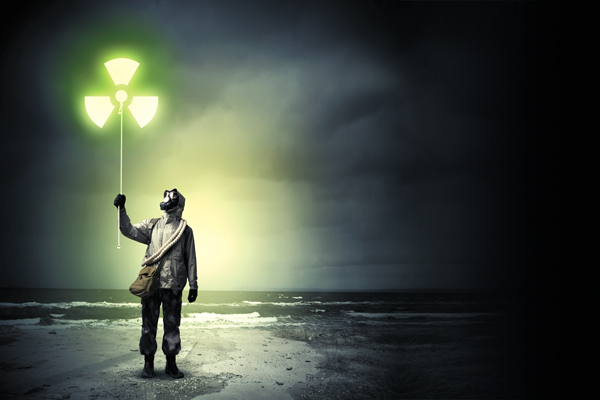 Despite being the nation nearest to Japan, Korea remained relatively calm after the March 2011 disaster at the Fukushima Daiichi nuclear plant.

But more than two years after the nuclear plant’s meltdown, the fear of radiation has increased in Korea after a series of revelations about contaminated water flowing into the Pacific.

The Korean government is trying to say that consumer anxiety over the safety of Japanese products in particular is being whipped up by irresponsible postings on the Internet and through social network services.

But fear continued to rise and fish consumption fell regardless of where the fish came from, affecting local fishermen and fish retailers. As a result, the Korean government decided on Sept. 6 to ban fish imports from eight prefectures surrounding the crippled Fukushima Daiichi nuclear complex to calm people down.

Korea had banned 26 agricultural products from 13 prefectures, but the import of fish products was relatively unaffected, according to the Ministry of Food and Drug Safety. 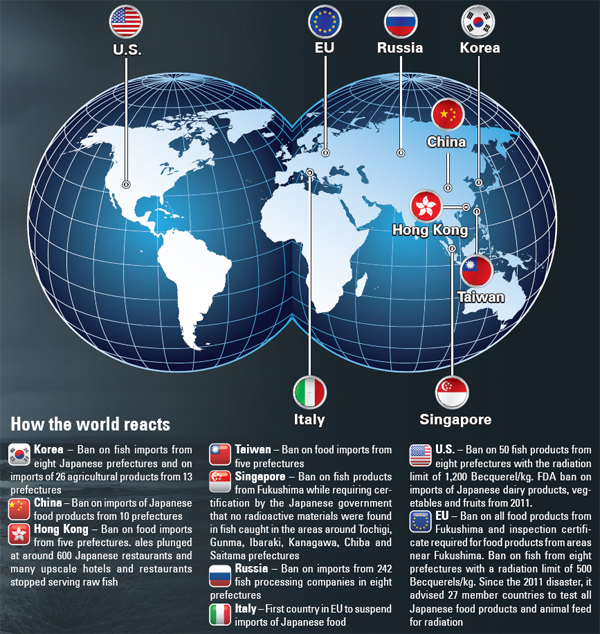 Fear among local consumers started rising after Tokyo Electric Power Company (Tepco) admitted that contaminated water was seeping over or around barriers into the Pacific.

It said that about 300 tons of contaminated groundwater from Fukushima Daiichi is flowing into the ocean every day and it suspected the leaks started soon after the accident. For the past two years, Tepco claimed it managed to siphon off the water into specially constructed storage tanks.

Fear also rose on reports that the amount of radioactive cesium in myungtae, or frozen dried pollack, daegu, or frozen cod, frozen bangeo, or yellow tail from Japan, and frozen mackerel quintupled in a year, according to the radiation tests released by the Korean Ministry for Food, Agriculture, Forestry and Fisheries late last year.

China, Taiwan, Russia, Hong Kong, the U.S. and the EU immediately took actions such as banning imports of food from Japan after the disaster and conducting radiation tests.

Korean consumers also distrusted local fish retailers, thinking they may lie about the origin of their products.

The government came up with measures to punish retailers who lied about the origin of their products with up to seven years in prison and fines of up to 100 million won.

But the measures came out nearly two-and-a-half years after the radiation leak began in 2011.

“As the tainted water is spread over the ocean, we cannot rule out radioactive materials in fish from outside the eight prefectures, especially those from Hokkaido and Tokyo,” said Kim Ik-joong, a microbiology professor at Dongguk University.

“The allegations of highly toxic radioactive water leaking into the ocean were raised long ago,” said a spokesperson for local discount chain Lotte Mart. “The slump in demand for fish products is not improving. The idea that Japanese fish products are dangerous to eat is too entrenched.” 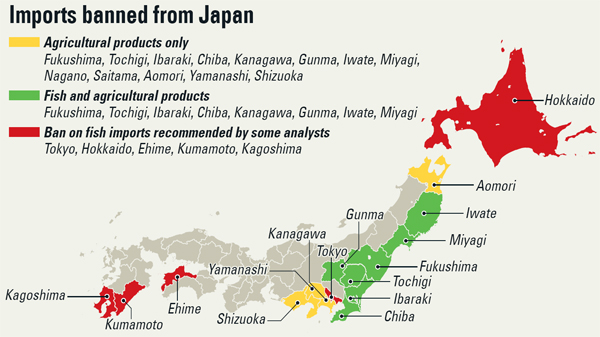 Responses by other countries

The fear spread to the United States and countries outside of Northeast Asia.

“The release of radioactivity from Fukushima, both as atmospheric fallout and direct discharges to the ocean containing radioactive iodine, cesium, and strontium-89 and 90, represents the largest accidental release of radiation to the ocean in history,” a report by the National Science Foundation of America said.

In the U.S., some nuclear experts say radiation tests on all seafood from the Pacific must be conducted, as contaminated air, rainfall and even radioactive debris from Japan have been drifting toward the U.S. West Coast since the March 2011 disaster.

MSN News quoted Arjun Makhijani, president of the Institute for Energy and Environmental Research, as saying, “We still don’t know how contaminated the water is, and some sampling of U.S. West Coast waters would be useful, as well as making the sampling of some fish public. I definitely would recommend that the FDA and EPA increase their vigilance in terms of the monitoring of food.”

Ken Buesseler, a senior scientist at the Woods Hole Oceanographic Institute near Boston, Massachusetts told ABC Radio Australia that a nuclear material from Fukushima will continue to reach the U.S. West Coast for years as radioactive water never stopped flowing into the ocean.

The U.S. Food and Drug Administration in 2011 banned imports of Japanese dairy products, vegetables and fruits due to concerns over radioactive contamination.

In February, it said it would halt imports of dairy products and produce from the affected areas of Japan.

Broccoli was added to a list of contaminated vegetables and seafood was to be screened for radiation.

Singapore has banned imports of fish products from Fukushima while requiring certification by the Japanese government that no radioactive materials were found in fish products caught in areas around Tochigi, Gunma, Ibaraki, Kanagawa, Chiba and Saitama prefectures.

India decided in 2011 it would ban imports of Japanese food until there was reliable data on the level of radiation, according to the Korean government-run Food Safety Information Service under the Ministry of Agriculture and Food and Rural Affairs. The Indian Food Safety and Standards Authority reviewed radiation tests every week since 2011. In April 2013 it loosened some import bans.

In 2011, the executive board of the European Union advised its 27 member countries to test all Japanese food products for radiation.

The EU has conducted tests on food and animal feed imported from Japan since the disaster. Italy was the first country in the EU to suspend imports of Japanese food.

A study by one of the world’s leading institutes in the field of marine sciences, the GEOMAR Helmholtz Centre for Ocean Research based in Germany, shows the spread of contaminated Fukushima waters. The first picture shows the spread of contaminated waters 16 months after the accident at the nuclear plant, the second shows 30 months after the accident and the last illustrates 80 months after. As a result of the Fukushima catastrophe, scientists suggest that Fukushima radiation could reach the U.S. West Coast in five years. Provided by GEOMAR Helmholtz Centre for Ocean Research Kiel

The Japanese government announced a comprehensive plan to create frozen barrier walls around the Fukushima nuclear plant by investing 47 billion yen on September 4.

Whether the plan will work is not known.

“It is true that about 70 percent of Japan’s territory is polluted,” said Kim Ik-joong, microbiology professor at Dongguk University. “According to PNAS, a scientific journal published by Japanese scholars, about 20 percent of Japanese land, including Tokyo, is contaminated with highly toxic radiation. It is obvious that agricultural products are also contaminated as the land is polluted with radioactive materials. The contamination on land will last approximately 300 years.”