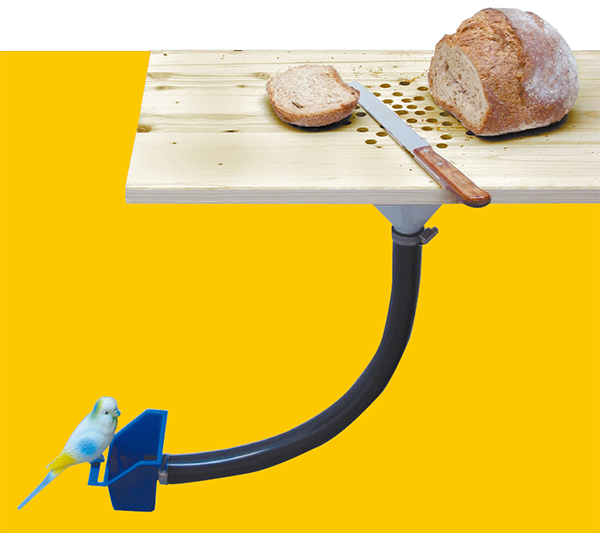 A cutting board for bread that also doubles as a feed bucket for birds.

Spain is a far-away country; traveling to it from Seoul alone takes more than 10 hours. But in some ways, Spain is closer to us than it may seem.

You probably have at least one or two items of clothing from Zara or Mango, two famous Spanish brands. The coveted shoes from the HBO series “Sex and the City” were Manolo Blahniks, also a Spanish designer, as is the Spanish shoe brand Camper, famous for its comfortable yet witty designs. Chupa Chups, the lollipop that can be found at almost any grocery store, was originally a Spanish brand before it was acquired by an Italian multinational company. Its cloud-shaped logo was designed by the Spanish painter Salvador Dali.

But while we have many Spanish brands all around us, we rarely get the chance to appreciate Spanish design, which is what makes the exhibition “Tapas: Spanish Design for Food” such a treat.

From top: A plate shaped like a splash of milk; bota bags; edible furniture made of old bread; a tablecloth that comes with instructions on where to place the cutlery; plates and glasses Provided by Korea Foundation

More than just food, it will make you think of good design and how it enriches our lives.

“We wanted to show our cultural side. Thus, we decided to combine design and food,” said the show’s curator, Juli Capella Samper, as he greeted a group of reporters during a recent pre-opening event.

“The reason we used tapas for the exhibition title is that tapas itself is irreplaceable, like your bibimbap,” said Capella, referring to the ubiquitous Spanish term for snacks or hors d’oeuvres. “In addition, everything you see at the exhibition is related to tapas.”

Combining food and design was surely a smart idea because Spain is home to some of the best of both. On the design side, Antoni Gaudi is an architectural legend, famous for his undulating, exuberant styles and the Sagrada Familia, a cathedral in Barcelona that is still under construction, 132 years after it broke ground.

For food, Spain produced El Bulli, the three-starred Michelin restaurant that was synonymous with “molecular cuisine” and repeatedly voted one of the best restaurants in the world until it closed in 2011.

Although the “Tapas” exhibition consists of three sections - The Kitchen, The Table and The Food - this reporter recommends thinking of the exhibition in three different keywords: creativity, practicality and coexistence (between traditional and modern).

The coexistence section is the most remarkable part, where traditional things are reinvented with a modern touch. One example is the porron, or a wine pitcher, that features a broad belly and a long spout from which people drink. Using the spout, people could pour a narrow stream of wine into their mouths without their lips touching it, ensuring good hygiene.

“It was used by poor people when they drank wine,” said Capella.

In modern times, however, the traditional pitcher has been remade as a portable and beautiful wine accessory. Titled Porron Pompero, the small glass attachment fits directly into the mouth of a wine bottle, turning the bottle into a porron.

Traditional wineskins of the past are available in plastic versions, making them easier to care for and use.

Being inspired by creative ideas is another part of the exhibition.

The Simple Citrus Spray will surely steal the hearts of people who love to cook. This invention sticks directly into a lemon or lime, allowing you to squeeze the handle and spray the fruit’s juices on whatever you are cooking.

Above: Traditional Spanish wine pitcher, or porron Below: Modern version of the porron

Off-white funnels that look like ducks are cute, but they also help you realize that simple ideas can sometimes change your kitchen into a whole different space.

The Spaghetto Kit enables chefs or aspiring chefs to try their own hand at molecular gastronomy. The kit contains a plastic bottle, five-meter-long (16-foot-long) tubes, a siphon adaptor and recipes, and with those items, one can easily make spaghetti noodles made of gelatin.

The Plate Platvin, which resembles a chunk of uncooked dough, is also interesting. The plate undulates and changes when it’s turned on, resembling dough being kneaded.

“It was designed by a Spanish chef. Many chefs not only cook but design containers and kitchen tools, too. It is an ongoing trend among Spanish chefs from four or five years ago,” added Capella.

There are many kitchen tools developed by practicing chefs. One of them is a spoon with a clip, which is part of the El Bulli collection. The clips are for wild herbs or flowers to be attached in order to awaken the senses before you start eating.

The award-winning Spanish designer Curro Claret’s Migas is also on display. Migas is a cutting board for bread that has a long funnel attached underneath of it. As you slice bread, the crumbs run down the funnel to a bird feeder outside the kitchen walls, providing treats for the local birds.

There is also a winery’s humorous wine labels, featuring photos of a grandfather, middle-aged man and teenage boy corresponding to the age of the vintage.

There is an anti-drip oil cruet to protect your table from any greasy messes.

A parataula, or tablecloth, bears a plan for the correct arrangement of cutlery, dishes and glasses, a helpful hint for those who have little knowledge of how to set a table.

By the time you walk out of the exhibition, you will surely have an urge to find a good paella or some tapas. ¡Disfrutar de su comida!

Inside the exhibition hall of “Tapas: Spanish Design for Food” By Jeon Ho-seong


“Tapas: Spanish Design for Food” runs until April 29 at the Korea Foundation Gallery at the Center 1 building in Suha-dong, Jung District, central Seoul. To go there, get off at Euljiro 1-ga Station, subway line No. 2, exit No. 1. Hours of operation are 11 a.m. to 8 p.m. from Mondays to Fridays, and 11 a.m. to 6 p.m. on Saturdays. The gallery is closed Sundays.