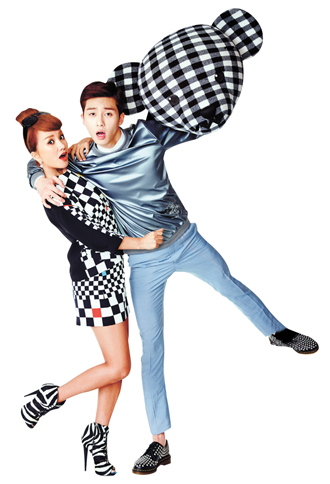 Uhm Jung-hwa and Park Seo-joon star in “A Witch’s Love.” Provided by tvN

Ten years ago, then-teenage singer Lee Seung-gi released “Nuna Is My Girl,” a song about having an older woman for a girlfriend - nuna being a Korean man’s word for “older sister,” but it can also apply to a close, older woman. Back then, the song and the idea behind it was a sensation.

It’s not that Lee’s song was the first to deal with older-woman/younger-man relationships. It’s a subject that has come up repeatedly in songs, television dramas and films over the years. But before Lee’s song, the emphasis was usually on the problems such relationships posed. Yoo Seung-jun in “I Love You Nuna” sang about having a hard time dealing with his older girlfriend’s friends, who teased him for being too young. In the 1998 movie “Tie a Yellow Ribbon,” a young man in love with an older woman was forced to disguise himself as a woman to stay close to her, because she just did not see him as a man.

Even in 2003, a Korean tabloid complaining about the rise of immoral TV dramas mentioned programs about “homosexuality, stalking and older women dating younger men.”

But for Lee’s “Nuna” ballad, he was confident and honorable about his feelings. He liked her without hesitating and said: “I’ll call you ‘you,’ no matter what you say. I’ll hold you tight in my arms so that you feel me as a man.” To call an older woman “you” instead of “nuna” was a daring move, and it brought an explosive response from women in their 20s.

“The large fan base Lee Seung-gi enjoys today was already formed at that time,” said Jeong Deok-yeon, a pop culture critic. “Lee even has a fan club just for women over 50 years of age.” 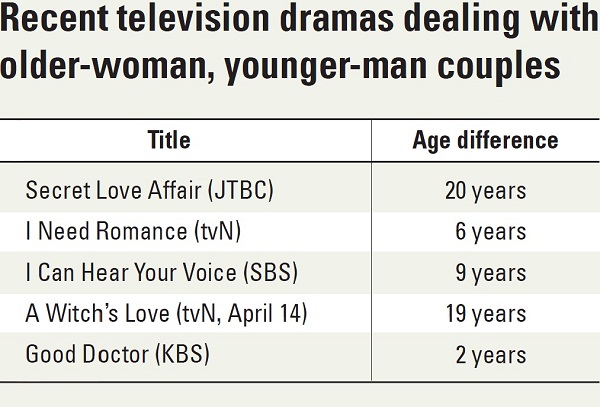 Back then, often the younger man was presented as a “macho” character. He may have been younger, but his looks were perfect and he had a great career. The older woman, on the other hand, was often relatively chubby, and reeling from a broken heart or horribly oppressed by a nitpicking mother. The power in the relationship was all with the guy. The man confessed his love and led the relationship, and the woman accepted it somewhat passively.

“The structure was needed to remove the social repulsion against older-woman/younger-man relationships,” said Gong hee-jin, a drama critic. “The conventional idea was that a man had to lead the woman.”

But since 2010, the formula has changed. Now the woman is usually stronger and more successful, while her younger boyfriend is often charming but less successful - either jobless or a student. The man instead is more gentle and tenderhearted, obedient to the woman, like in the movie “You’re My Pet” (2011).

Other hits last year like “I Can Hear Your Voice” and “Queen of the Office” dealt with women who are older and higher up the social ladder dating younger, humbler men. 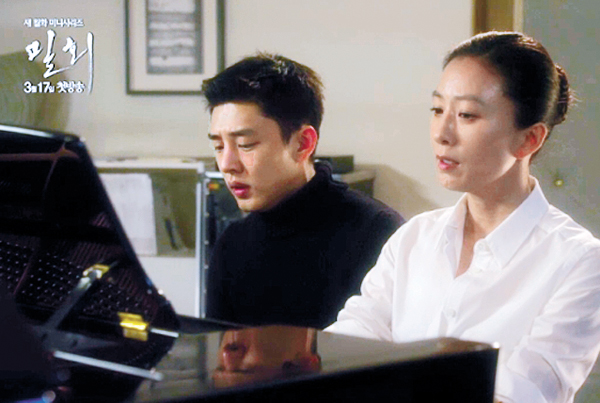 “The older-woman/younger-man couples in the early stages were about creating a fantasy for middle-aged women, but recently the male characters have grown more maternal,” said Yoon Seok-jin, a Korean literature professor at Chungnam National University.

The age differences between the characters has also grown over time. The difference used to be less than 10 years separating the couples, but now JTBC’s “Secret Love Affair” features a lead female character who is 20 years older than her love. And tvN’s soon-to-be-released drama “A Witch’s Love” will also feature a couple with a 19-year difference.

Experts say to expect more programs like these in the future.

“Television dramas reflect social phenomena, but are one step ahead,” said Jeong.

“Older-woman/younger-man couples are a trend at the moment, so contents will address this more in the future.”