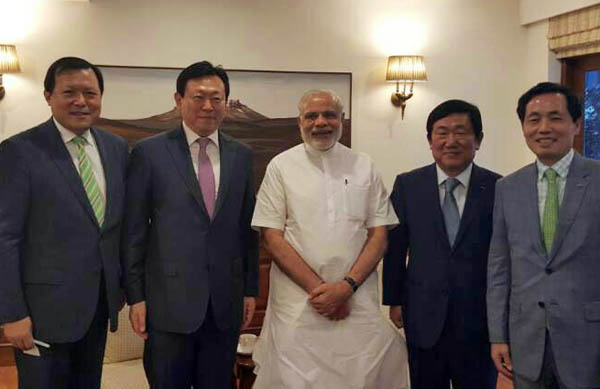 Lotte Group has accelerated changes to its ownership structure in a bid to ease the group’s complex cross-shareholding system as Chairman Shin Dong-bin acquired a 1.3 percent share in Lotte Confectionery, held by Lotte Construction & Engineering.

The chairman’s purchase will cut Lotte’s cross-shareholding links by 34 percent from 416 to 276, said the group’s task force in charge of restructuring corporate governance on Friday.

Lotte Group said earlier this week it launched the task force to overhaul the company’s structure.

Chairman Shin pledged to reduce 80 percent of its cross-shareholdings by the end of this year and take public Hotel Lotte, the de facto holding company of local Lotte affiliates.

Financial regulators are pushing the conglomerate to list more subsidiaries in a bid to get essential financial information on the group’s sprawling businesses.

Kim Won-dae, a senior official at the Korea Exchange (KRX), met with his counterparts from the Lotte Group on Thursday and told them that about 20 subsidiaries of the group meet requirements for an initial public offering (IPO).

Under the law, listing a company on the Kospi market requires one of three conditions: 30 billion won ($25 million) of equity; at least one million of stocks listed; and 70 billion won of annual sales on average for the previous three years.

According to the KRX, the Lotte Group has a total of 80 subsidiaries, but only eight have been listed.

At the meeting, the KRX officials proposed some advantages for a Lotte subsidiary, such as a so-called “fast track” system that reduces the normal period for audit from 45 business days to 20.

“We are providing some convenience for companies that are assumed to meet the listing requirements,” said Dan Il-soon, director at the Kospi Market Service Team at the KRX.

The KRX officials also proposed a stock split for the group on already listed subsidiaries, such as Lotte Confectionary, which cost more than 1 million won per share.

“Including the Lotte subsidiaries, we are also considering other large-cap companies for a stock split, such as KCC, Orion, or Ottogi,” said Dan. “Their shares are not frequently traded due to high prices.”

While the group struggles to improve its corporate governance, Shin flew to India. He proposed establishing shopping complexes connected to populous railway stations in India during his meeting with Indian Prime Minister Narendra Modi in New Delhi, the company said on Friday.

The chairman visited the country to oversee businesses outside of Korea after settling the highly publicized family feud over control of the retail giant.

At the meeting, the chairman suggested building shopping centers integrated with railway stations in New Delhi, Mumbai and Chennai, according to the group.

The proposal is part of the retail group’s business focus to build shopping and cultural complexes abroad - especially in emerging economies in Asia.

Shin’s visit to India follows his stay in Malaysia where he met the country’s Prime Minister Najib Razak to request support for Lotte’s operations there.