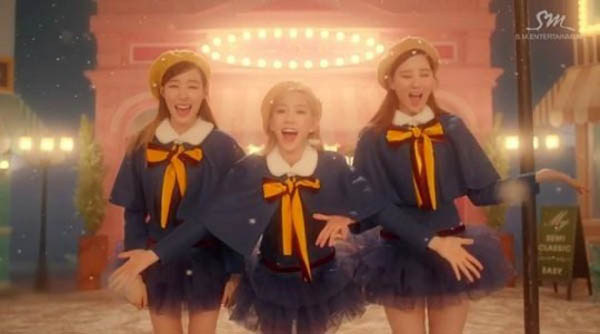 Taetiseo, a spinoff group of Girls’ Generation, unveiled a special Christmas album at midnight on Friday, and the title track, “Dear Santa,” has already topped eight major online music charts, including Melon, Naver Music, Genie and Olleh Music.
“Dear Santa” is a ballad, spiced up with swing jazz. Seohyun, a member of Taetiseo, wrote the lyrics.
The three-member K-pop group will begin promoting the album today. They will reportedly perform other tracks from the album, such as “Merry Christmas” and “Winter Story,” when they appear on TV music shows today and tomorrow.
The album is also available in physical music stores.
Taetiseo, which consists of Taeyeon, Tiffany and Seohyun, was first formed in 2012 and has released hits such as “Holler” (2014) and “Twinkle” (2012).
By Sung So-young