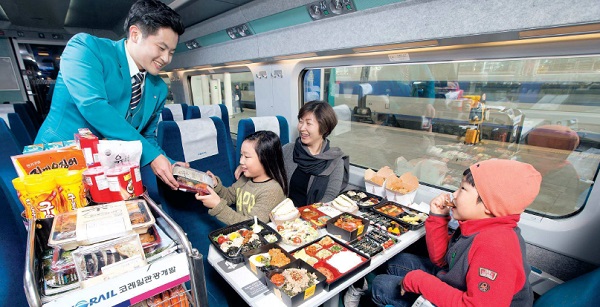 Travelers enjoy dosirak, or boxed meals, on an express KTX train along with some snacks they bought at Seoul Station. [IM HYUN-DONG]

The joy of travel comes not only from seeing new things and getting away from your daily routine, but also from eating interesting local food.

For those who want to maximize their chances of tasting what’s good in regions outside of Seoul, many train stations in Korea that see a large amount of traffic are starting to open food stores and restaurants so travelers can pick up some food to eat before they depart or to bring back for family and friends.

These days the train station food options are as diverse as the appetites of travelers, but the options were limited back in the day.

Until the 1980s, only more affluent customers could use dining cars, and not all express trains had a dining car. Only the Jeungsan train that ran between Seoul and Yeosu, South Jeolla, from 1963 to 1984, and the Tongil train that connected Seoul and Busan from 1954 to 1977 had dining cars. There, riders could get Western-style food that was made to order or Japanese food like sushi.

However, now there are no dining cars on trains in Korea. The dining cars on the Saemaeul and Mugunghwa trains have been replaced with cafe cars. These cars include a snack bar, massage chairs and karaoke machines so that riders can be entertained on the train.

On express KTX trains, there is a snack bar, but it only takes up about half of one passenger car. Moreover, this small snack bar is not available on all KTX trains, but only certain routes.

With the absence of dining or cafe cars, most train travelers are more familiar with the snack carts that roll down the aisles, a service that first started in 1969.

Before the arrival of such snack carts, travelers could buy items out of a basket. Early on, workers would carry a basket filled with boiled eggs, tangerines or gimbap (rice rolls). As time went on, the items for sale on the train changed. According to Korail Retail, passengers used to be able to purchase boxed meals with rice and some side dishes along with cigarettes, since back then travelers could smoke on the train.

In the 1960s, popular travel snacks were dried squid, peanuts and boiled eggs, along with soju. In the 1970s, hodugwaja, a small round baked good filled with red bean paste and walnuts often sold in train stations, became a must-take-home item for travelers. In the 1980s, sponge cakes usually called castella along with canned beer and squid cooked in electric machines sold like hot cakes, and in the 1990s, sweetened instant coffee and banana flavored milk became the new hot snack items.

Entering the new millennium, locally grown specialties such as mackerel from Andong, North Gyeongsang, and kimchi from Yeosu started to be sold in train stations.

The food item that has been associated with train stations for the longest time is dosirak, or boxed meals. Various types of dosirak have been available to travelers since trains started to run on the Korean Peninsula and are still among the most popular items.

Many large train stations such as Seoul Station, Busan Station, Daejeon Station and Dongdaegu Station have different dosirak shops where travelers can pick up food before boarding the train.

With around 150,000 people passing through this station every day, this station is home to a variety of dosirak shops. In 2013, eight dosirak shops opened in between the platform and the waiting area to serve busy travelers running down to catch their trains.

Kkokkoma Gimbab, by platform No. 11, modeled its menu after the additive “crack” gimbap popular at Gwangjang Market in central Seoul. Some nearby residents even come to the station just to get this dish. The shop sells around 800 dosirak a day, and one box is 3,000 won ($2.50).

Hottomotto, a Japanese dosirak company known for selling over 300 million boxes a year, also has a shop by platform No. 7. Among its nine menu options, the special dosirak that has fried shrimp and grilled salmon costs 9,000 won. A Korean dosirak place called Damiyeon is also popular as it grills bulgogi on the spot for their dosirak.

If you don’t have time to browse the shops, you can simply preorder dosirak from Korail, the operator of all trains in Korea. The dosirak served on the train are made in conjunction with The Plaza Hotel, and 540,000 were sold last year. Customers have to make a reservation before 6 p.m. on the day before departure by calling (02) 2084-7777.

The most popular food found at Busan Station is at a shop run by Samjin Eomuk, a local fish cake maker. Since it opened its 20-square-meter shop on the second floor of the station in 2014, the shop has been taking in a whopping 1.3 billion won a month in sales. The shop sees the most sales out of all stores operating at train stations in Korea.

The fish cake store looks a lot like a bakery in the way it displays its different flavored fish cakes. Some feature potatoes on the outside and some have cheese inside. The most popular fish cake with hot peppers costs 500 won and over 1,500 units are sold daily.

This station, which is the center of Korea’s train system, is also filled with a variety of food items travelers might enjoy. The station opened in 1905 as the Gyeongbu line from Seoul to Gyeongsang opened, and it started to see more traffic in 1914 when the Honam line from Seoul to Jeolla started to run. As many travelers transferred at Daejeon Station, many try to make the most of their stopover by enjoying a local noodle dish called garak guksu.

After the traffic from the Honam line moved to Seodaejeon station and the arrival of a KTX line in 2004, the noodles disappeared, but Korail decided to bring back the once-popular dish. It was reintroduced to the station in 2013 and is now sold at 4,500 won.

Seongsimdang, a bakery originally from Daejeon which is now popular nationwide, also has a store at the station. The bakery there opened in 2013 sells about 60 different types of pastries, and the most popular twigim soboro (fried streusel), which costs 1,500 won and sells about 10,000 units a day.

Around 50,000 passengers a day use this station, especially those in the Gyeongsang region traveling to nearby areas like Jinju, Masan, Gumi and Pohang.

There is a bakery called Samsong, which started in Daegu in 1957. After it had opened its branch at the station last year, the bakery has been seeing around 150 million won sales a month and instantly became the most popular store at the station. Its most popular menu item is its corn bread, which was first developed in 1986. Bakery president Park Seong-uk says that the particular bread has allowed his small bakery to survive even with the fierce competition from franchise bakeries. The treat costs 1,600 won each.

Banwoldang Croquette, which originated from Daegu, is another popular snack at the station. About 2,000 fried croquettes of 16 different flavors are sold there each day, with the most popular one being cheese-flavored. They cost 2,000 won apiece.