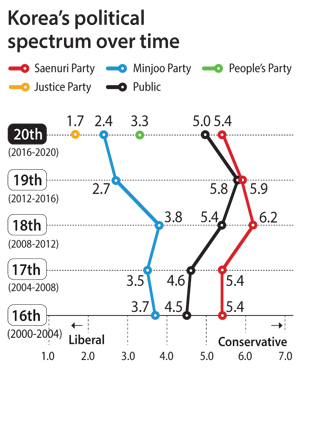 The ideology spectrum of lawmakers of the 20th National Assembly has shifted to the left, a poll showed Monday, with 52.1 percent of 217 lawmakers polled being identified as liberals.

The poll was jointly conducted by the JoongAng Ilbo and the Korean Political Science Association and asked lawmakers 15 questions on topics ranging from the Korea-U.S. alliance, inter-Korea relations, chaebol reform, welfare, gay marriage and the death penalty. Each lawmaker’s political ideology was ranked on a scale from 0 to 10.

The outcome of the poll shows an average score for the lawmakers of 3.9, 0.7 points lower, or more left-leaning, than the last joint survey conducted in the early days of the 19th National Assembly four years ago.

For the conservative governing Saenuri Party, the spectrum has tilted to the left as the average ideological scale of its members stood at 5.4, down from 5.9 in the 19th Assembly and from 6.2 in the 18th Assembly. For the major opposition Minjoo Party of Korea, the average score was 2.4, also down from 2.7 in the previous Assembly. The average score for the minority People’s Party - 33 of its 38 reps took the poll - was found to be 3.3, a measure that falls between the Saenuri’s and the Minjoo’s.

The outcome showed that the 20th Assembly, though 83 lawmakers weren’t polled, has moved to the left on the ideological spectrum in what some see as a response to growing calls from the public to rein in widening economic inequality.

The 15 questions involved some hotly contested political and diplomatic issues. One question asked lawmakers whether they agree with the Park Geun-hye government’s decision to shut the Kaesong Industrial Complex earlier this year in line with international sanctions punishing North Korea for its fourth nuclear test. Representatives were also asked whether they thought the country should deploy the Terminal High Altitude Area Defense (Thaad) missile system to better guard against North Korean threats at the risk of damaging ties with China.

Of 94 Saenuri lawmakers polled, two were found to be liberals: economist-turned-lawmaker Lee Hye-hoon with a 3.8 point score, and Kang Seok-ho a three-term lawmaker.

One interesting outcome was the scores of former Saenuri chief Kim Moo-sung and interim Minjoo leader Kim Chong-in. Though Kim Chong-in now heads the liberal Minjoo, his scale, 4.6, was higher than Kim Moo-sung’s 4.4.

Kim Moo-sung, who is expected to run for president next year, agreed with the need for a gradual increase in corporate tax in consideration of economic conditions. Kim Chong-in responded there was no need to change the current rate of 22 percent. The current rate of 22 percent was the result of the former Lee Myung-bak government’s decision to slash it by three percent from 25 percent in its second year in office in 2009 for corporations with annual taxable profits exceeding 50 billion won ($43.5 million).

Rep. Yoo Seong-min, a former economist with a Ph.D. from the University of Wisconsin, who is also widely expected to compete for the party nomination for president, was also seen to have shifted left. His 6.2 point score four years ago fell to 4.9. As with former Chairman Kim, Yoo concurred with the need to raise the corporate tax rate and to provide free day care benefits to parents based on their financial status.

The overall tilt to the center-left has left a group of conservatives in the Assembly a marginal group. Of the 217 respondents, only 17 lawmakers, or 7.8 percent, received scores higher than six to indicate they are conservatives. All the 17 are Saenuri members. 87 turned out to be moderates with their spectrum scores ranging from 4 to 6. Of 85 Minjoo lawmakers who were polled, the overwhelming majority of 96.5 percent were liberals while 3.5 percent were moderates. No conservative was found among the respondents.

One issue the lawmakers unequivocally agreed on was a need to solve problems associated with contract or irregular workers. 90.2 percent of the respondents said the country should improve working conditions for contract workers or elevate their status to salaried workers.

“Social issues such as an income gap between workers at conglomerates and those in small-to-medium size companies as well as the lack of good jobs for young people have been on the social agenda (to solve),” said Ka Sang-joon, professor of political science at Dankook University, “The shift of the ideological stance indicates lawmakers are now paying attention to those issues.”

Kang Won-taek, a professor of political science at Seoul National University, said the shift showed that lawmakers realize that conventional wisdom will not solve an array of problems stemming from economic polarization, low birth rates and employment.

“Lawmaker’s recognition that the governing principle associated with neo-liberalization over the past decade held by two conservative governments will not adequately address ongoing problems,” he said, “and has made them search for answers in the liberal field.”