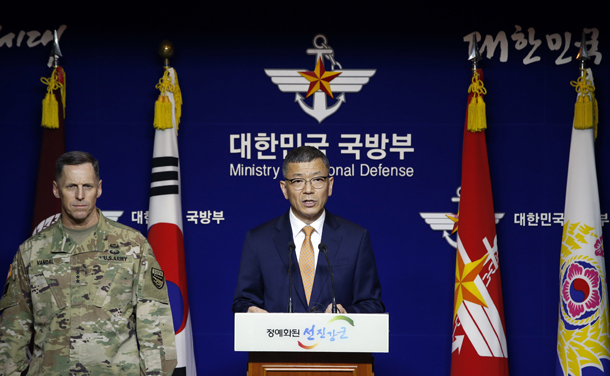 Yoo Jeh-seung, deputy minister for policy in the Ministry of National Defense, makes the announcement on the U.S. deployment of an advanced missile defense system to Korea on Friday in Seoul. Lt. Gen. Thomas Vandal, the commander of U.S. Forces Korea’s Eighth Army, left, joined the briefing. [NEWSIS]

The joint announcement between the two allied nations prompted immediate opposition from China and Russia, who claimed that the placement of the advanced American missile defense system on the Korean Peninsula poses a risk to their own security and contributes to regional instability.

Yoo Jeh-seung, Seoul’s defense deputy minister for policy, and Lt. Gen. Thomas Vandal, chief of staff of the U.S. Forces Korea (USFK) and commander of the Eighth Army, said in a press briefing that a joint decision between the two countries was reached to deploy the Thaad system here as a defense measure, taking into consideration the U.S.-South Korea alliance.

This decision, said Yoo, was a measure “to guarantee the security of the Republic of Korea and our people from North Korea’s nuclear weapons, weapons of mass destruction and ballistic missile threats, as well as to protect the military assets of the ROK-U.S. alliance.” 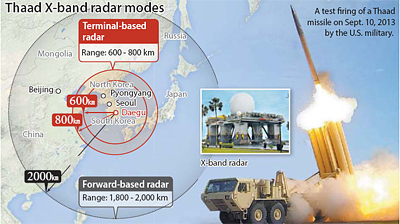 He added that the Thaad system will be deployed by the USFK no later than the end of next year and that a decision on the location of its placement is also in its “final stages.”

“North Korea’s continued pursuit of ballistic missiles and weapons of mass destruction in opposition to its commitments to the international community require our alliance to ensure that we retain the ability to defend ourselves in the face of this threat,” said Vandal. “Deploying Thaad to the Korean Peninsula will improve our missile defense posture, which is a critical aspect of our defense strategy.”

For years, the placement of the Thaad system in Korea remained a hot potato issue, and both Seoul and Washington insisted there were no negotiations on it although numerous U.S. defense officials publicly pushed for its deployment, including then-USFK Commander Gen. Curtis Scaparrotti as early as June 2014.

Much of Seoul’s initial hesitance came from diplomatic concerns. Some neighboring countries have been wary of the placement of the U.S. anti-ballistic missile system in South Korea, which comes with a powerful radar system that can cover more than 1,000 kilometers (621 miles).

Its placement on the Korean Peninsula has been protested by both China and Russia, who have expressed concerns that the radar could be used as a possible method of surveillance against them.

In the past, the Korean government has pushed for development of the Korean Air and Missile Defense (KAMD) system as Seoul’s alternative to Washington’s Thaad system to cope with increasing nuclear threats from the North.

However, following Pyongyang’s fourth nuclear test in January and a long-range missile launch in February, South Korea and the United States were quick to launch official discussions on the USFK’s placement of the Thaad system here. In the meantime, North Korea has continued to conduct intermediate-range ballistic missile (IRBM) launches as well.

A South Korea-U.S. joint working group over the past few months reviewed the deployment of the Thaad system and “confirmed the military effectiveness” of placing the battery here, according to the Defense Ministry. The group is in its final stages of discussing the most effective and safe location for the placement of a Thaad battery and will reach a decision within a couple of weeks, said Yoo.

“The United States and South Korea’s deployment of the Thaad does not help achieve the goal of denuclearization of the Korean Peninsula and also is not beneficial in safeguarding peace and stability in the region,” the Chinese Foreign Ministry said in a statement. It added this will “seriously damage the strategic security interests of related countries, including China,” demanding the “immediate halt” of the process of deploying the Thaad.

The Russian Foreign Ministry released a similar statement expressing “serious concern” over the Thaad decision, which it said comes “despite strong and persistent opposition” from Russia and other related countries.

Russian President Vladimir Putin and Chinese President Xi Jinping in a joint statement after a summit at the end of last month called the possible deployment of the Thaad as “not constructive” and that it “has negatively affected the global and regional strategic balance, stability and security.”

Seoul officials said that the Chinese and Russian governments were notified of the decision to deploy the Thaad system the previous day.

They have been especially sensitive to the AN/TPY-2, a high-resolution, rapidly deployable X-Band radar designed to detect, track and identify ballistic missile threats at long distances and at very high altitudes.

Washington has emphasized the radar will be configured to terminal-based mode should it be placed in Korea.

A South Korean defense official said in response to China’s strong protest, “The Defense Ministry’s position is that there is nothing more important than protecting our people’s lives and property.”

A Thaad battery is comprised of one AN/TPY-2 phased array radar, six mobile launchers, 48 interceptor missiles and a fire control and communications unit, which can cost up to 1.5 trillion won ($1.3 billion).

Defense Minister Han Min-goo on Friday said during a meeting with lawmakers at the National Assembly that, “the operating cost of the Thaad system is covered by the two governments’ defense cost-sharing agreement, so we will bear no additional cost except for providing the site.”