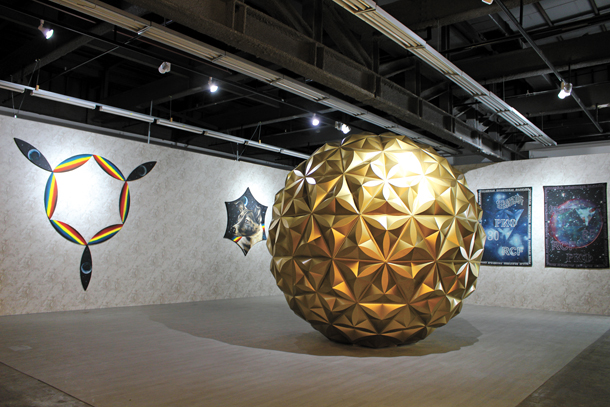 Russian artist Arseny Zhilyaev’s installation work “Cradle of Humankind,” is now on view at the Gwangju Biennale Exhibition Hall as part of the 11th Gwangju Biennale, whose theme includes bold imagination about the future. [MOON SO-YOUNG]

GWANGJU, SEOUL - The 2016 editions of the Gwangju Biennale and Media City Seoul, which both kicked off one week ago, have striking similarities in several points, although the two major Korean art biennials have venues distant from each other, different curators and backgrounds.

This year, the Gwangju and Seoul biennials features more female and non-Western artists than ever before. Both events selected and arranged artworks with the intention of the audience having an intimate experience rather than just admiring the spectacles around them. And their themes - the Media City Seoul’s “the future of humans seen through the language of art” and the Gwangju Biennale’s “what does art do regarding the future?” - are not much different from each other.

On the other hand, the biggest differences are seen in the composition of the exhibition spaces; Media City Seoul has created divided spaces with many sections in a classical way, whereas the Gwangju Biennale has extraordinarily minimalized divisions, which drew praise and criticism at the same time.

Now at the Seoul Museum of Art (SeMA) near City Hall station, the ninth Media City Seoul’s main venue, is a video piece installation that depicts people sleeping on mattresses spread on a gym’s floor. It is “The Sleep” by Korean artist Yang Ah Ham. She is part of one of 61 teams of artists from 24 countries to participate in the biennial, which started on Sept. 1 and runs through Nov. 20 at the museum and its three other branches in the Capital city’s northern and southern parts.

Though the reason why the people in Ham’s video sleep there are not unveiled, the viewers may feel familiar with the images and get an air of unknown anxiety, since they have often seen on TV news the victims of diverse large-scale disasters lie in temporary shelters made in public gyms. “I wanted to explore the fears and anxieties of individuals facing crises happening in many societies today,” the artist said.

In another corner of the museum is famous French artist Pierre Huyghe’s apocalyptic film “Untitled (Human Mask).” It depicts in a calm, surrealistic air a monkey that once served guests in a Japanese restaurant and was left all alone in the ghost town ruined by the 2011 Fukushima nuclear accident. Wearing an expressionless pale human mask and girlish wig, the monkey looks like something in between a human and an animal - a creature appropriate for a post-apocalyptic world.

Some other artists deal with wars and conflicts, which would seriously affect the future of humankind as well as natural disasters and accidents. Among them are Palestinian artist duo Basel Abbas and Ruanne Abou-Rahme, who show a video piece “And Yet My Mask is Powerful” about the reality of violence in Palestine.

And some others like Japanese artist Akihiko Taniguchi, Austrian artist Oliver Laric and Korean artist Kim Heecheon explore future communications, culture and even ontology, and how it will be changed by the new technologies of copying and simulating.

But many other works on display are only loosely connected to the theme of “future,” including the works of Korean-American artist Christine Sun Kim and Thai artist Korakrit Arunanonchai who are the co-winners the SeMA-Hana Media Art Award of this year’s biennial, despite their individual prowess.

Kim’s “Game of Skill 2.0” is an interactive sound art piece. Only when the viewers walk in balance, holding a special piece of equipment and following curved lines, can they listen to a recorded story of the artist’s grandmother. With the work, the artist who has a hearing handicap, leads the viewers to recognize that listening sometimes requires much skill and effort.

The biennial’s title that encompasses all these issues consists of the odd words “Neriri Kiruru Harara,” which were coined by the famous Japanese poet Shuntaro Tanikawa in a poem to describe unknown acts by a Martian. The title and the exhibition are about “the realism of possibility,” Beck Jee-sook, the biennial’s director, told the press in a preview on Aug. 31.

Because it is too big a theme and almost everything can be told and shown under the title, the 2016 Media City Seoul leaves a vague impression overall, although some of the works on display leave a strong impression.

The same problem occurs at the 11th Gwangju Biennale, which kicked off at the main venue Gwangju Biennale Exhibition Hall and eight other venues including the Asia Culture Center and the Uijae Art Museum in the southwestern city last Friday.

The title of this year’s show, which runs through Nov. 6, is “The Eighth Climate.” It refers to an imaginary world conceived by a 12th-century Persian philosopher Sohrevardi and is considered to be “a place outside all places” according to the 20th-century French philosopher Henry Corbin. So, the biennial’s title, together with its subtitle “What Does Art Do?” can be interpreted as the alternative world or future proposed by artists with bold imagination. Maria Lind, director of the 2016 Gwangju Biennale, said in a preview on Sept. 1 that the subtitle’s question is about “art’s projective and imaginative qualities - art’s active relationship to the future.”

This is important but every art piece can be read in this context. The works by 101 teams of artists from 37 countries in the 2016 Gwangju Biennale are so diverse in their mediums and themes that they are difficult to be grouped together under anything narrower than the broad theme of “What Does Art Do?”

Among the works recommended by Lind in particular is one of the documentary video series “Act of Affect” by Korean artist Siren Eun Young Jung (Jung Eun-young). Leading to questions about gender dichotomy in the current society, it shows a woman practicing a male role in a play as she is a rare young successor of gukgeuk, a Korean all-female musical theater genre, which boomed in the mid-20th century and has declined since then.

Left: Exceptionally, the media art pieces are displayed together in the Gallery 2. Right: Korean artist Suki Seokyeong Kang’s installation works are in the fourth gallery of the Biennale Hall. [NEWSIS, MOON SO-YOUNG]

Some bold imaginations about the future are also included in the list of recommendation. American artist Tyler Coburn presents ergonomic furniture designed for future humans. And Russian artist Arseny Zhilyaev shows an installation work “Cradle of Humankind” that consists of a giant golden globe and tapestries of cosmic images with enigmatic texts. These objects represent the artist’s fiction based on the early-20th-century Russian cosmism. In the fictional future, humans have spread into outer space, abandoning Earth, but occasionally return to visit museums on Earth to learn the history of humans. The golden globe could be the spaceship of future humans or a prehistoric spaceship said to have brought life to Earth from outer space. So with the ‘spaceship’ and tapestries, the Gwangju Biennale Exhibition Hall is transformed into a museum on abandoned Earth and the viewers are shifted to the future.

Some artists deal with the sociopolitical past and present, which would affect the future. Spanish artist Dora Garcia has re-constructed in the exhibition hall the Nokdu Bookstore, an iconic bookstore where the 1980 Gwangju Democratic Movement was incubated and hatched and is “a knot” of ideas and history, according to the artist. Korean artist Inseon Park portrays dreary and ominous landscapes of repetitive demolitions and re-constructions of buildings and social values in Korea in symbolic paintings.

“I cannot hear any manifesto that the artworks make together - a certain argument of a biennale, while I can hear each artwork’s individual voice,” said You Jin-sang, art critic and professor of Kaywon University of Art & Design. “On the other hand, the composition of spaces and arrangements of artworks are fresh, while being refined… I like it very much.”

Lind and her curatorial team made a bold attempt in Gallery 2 where video art pieces and films are concentrated. Breaking the custom that each media art piece is installed in a black box, they installed the works and scattered them through a big, completely dark exhibition hall, without walls between them. The visitors get a cosmic feeling from the big black space where the displays shine here and there. And they come to approach each art piece more easily than when it is separated in each black box. But some critics said such arrangement would weaken the audience’s concentration on each work.

The installations of artworks in Gallery 4, where art works considering abstract and geometric forms are concentrated, also gained both praise and criticism.

“The works in Gallery 4 have sociopolitical contexts although their apparent forms are abstract and geometric,” said Lee Dae-hyung, art director of Hyundai Motor, who was recently appointed as curator of the Korean Pavilion for the 2017 Venice Biennale.

For example, “Rubber Coated Steel,” the installation by Lebanese artist Lawrence Abu Hamdan, looks like a group of beautiful abstract paintings but are actually series of prints of the audio-ballistic analysis of recorded gunshots fired by Israeli soldiers in the occupied West Bank of Palestine. His audio investigation proved that two teenagers were shot by real bullets and not rubber ones. And Korean artist Suki Seokyeong Kang’s installation works look like abstract sculptures but they are piled-up everyday objects that can fall from any small impact, symbolizing vulnerable individuals.

“It was a great idea to gather such works in a gallery,” Lee said. “But it was a problem that these works are spread in the gallery without any accents.”

“In general the installations of works in this biennial were impressive, although the theme is somewhat broad and vague,” he added.