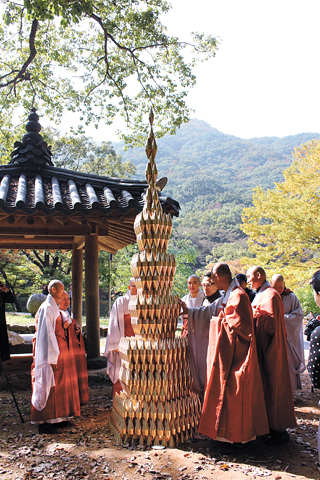 Monks of the Songgwang Temple in Suncheon, South Jeolla view “Mediated Memory,” a sculpture by artist Byoungho Kim, fifth from right. Installed near the Cheongnyang pavillion at the temple’s entrance, the sculpture will be there for one year. [MOON SO-YOUNG]

SUNCHEON, South Jeolla - Songgwang Temple, or Songgwangsa, is dubbed one of Korea’s “three jewel temples,” as it has produced many famed priests in its 1,000-year history, including the sixteen monks titled “guksa (the nation’s teacher).” The three jewels of Buddhism refer to the Buddha himself, Dharma (his teachings) and monks.

It is strange that such a historic temple built on such a large scale has no pagoda, which is regarded as Buddhist architecture’s essential element. There are two hypotheses, according to the Songgwangsa monks.

One is that the temple’s site in Suncheon, South Jeolla, has the form of a lotus floating on water according to feng shui, so a pagoda, mainly made of stone in Korea, would have presented an inappropriate pressure on the lotus. The other theory is that there was no proper stone for a pagoda, such as granite, near the temple.

Either way, the lack of a pagoda is now regarded as its most unique element.

It’s therefore an unprecedented move for Songgwang Temple to embrace a contemporary art project - a sculpture that resembles a pagoda - and to allow it near the Cheongnyang pavilion at the temple’s entrance. The sculpture “Mediated Memory” by artist Byoungho Kim was unveiled on Saturday.

Kim, 42, is known for sculptures composed of many modules, which give the viewers the impression of industrial products but, at the same time, a feeling of sublimity as their forms seem to extend toward immensity.

“I wanted to try a work that would breathe with nature and people, instead of merely existing in the white cube of a museum or gallery,” Kim said at the temple on Saturday. “The work will stand here for the next one year, with its color turning from its current gold to reddish brown in the sunlight, wind, rain - and with the touch of humans.

“Actually, I don’t have a religion,” he continued. “But I’ve been interested in Buddhist pagodas and the cairns piled up by commoners, which can be found around almost every Korean temple, as they are visualizations of human prayers. Cairns are seen worldwide... They represent wishes or prayers. So, just like the piling up stones, I have linked modules into the form of a Buddhist pagoda.”

“The complete form of the pagoda reminds me of the cairn carrying the wishes of commoners ,” said Venerable Daegyeong, head of Songgwangsa’s precepts institute. “It also shows the Buddhist theory of Pratityasamutpada - that every phenomenon arises dependent upon another.”