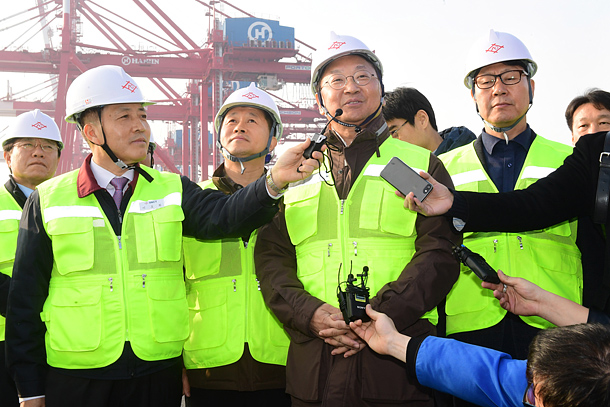 Talk of crises is in the air. Korea may be forced to renegotiate its free trade deal with the United States. China could sharpen its economic retaliations for the deployment of the U.S. Terminal High Altitude Area Defense (Thaad) missile system. Daewoo Shipbuilding & Marine Engineering (DSME) is on the brink of declaring default.

The 10-year curse has returned to haunt the country. The Asian financial crisis broke out in 1997, the global financial meltdown in 2008, and the flash points for a 2017 crisis will almost certainly come from the taking of power by U.S. President Donald J. Trump. So says the rumor mill in the local financial markets.

Some grounds for an April-is-the-cruelist-month crisis are plausible. In April, the U.S. Treasury Department could brand China a currency manipulator in a review. The yuan would crash, bringing down the Korean won and setting off foreign capital flight from Chinese and Korean markets. The toll on the trade and financial fronts would be heavy. Korean stocks could be wiped out.

The odds are 50-50. Trump declared he would take on China faster than the market expects. But that cannot be entirely relied upon. Trump irked Beijing in December by talking to the president of Taiwan and saying he doesn’t have to stick to the one-China policy. But in a later phone conversation with the Chinese president, he said he honors the one-China policy. One step forward, two steps back. Branding Beijing a currency manipulator is a declaration of a war with China. Even Trump may not dare go that far.

Trump could look for an easier target. He would turn to a regime favoring an undervalued currency with a sizable trade surplus. Korea makes a good target. The Financial Times recently said that evidence suggested Taiwan and South Korea were the worst offenders in terms of currency exploitation, citing a U.S. official. The report indicates Washington could look beyond China and Japan.

There is another worry that is far more alarming. Washington could strike at North Korea. Some financial institutions are already advising their VIP customers to buy dollars and gold.

Authorities have stepped in to shoot down rumors. Yoo Il-ho, deputy prime minister for the economy, said there were no grounds for an April crisis. “There is no crisis beyond our imagination,” he said. Yim Jong-yong, chief of the Financial Services Commission (FSC), ordered senior officials to quench market jitters about an April disaster. The FSC is actually studying the grounds for these worries, including DSME’s liquidity.

Market pundits shrug off the hype. “Has there been a time when Korea was not in a crisis?” asked Seo Myeong-seok, president of Yuanta Securities. “Rumors always ended as rumors.” Kim Kun-ho, president of FN Guide, said, “The dollar holds the key to a crisis, but even Trump cannot know [the dollar’s] direction.” Trump favors a weak dollar to help his trade policy, but his fiscal policy supporting fast growth would strengthen the greenback. Cho Jae-min, head of KB Asset Management, said the probability of a full showdown between America and China was low.

But uncertainties tend to breed crisis. A crisis could be in the making purely based on the sudden depth of uncertainties in the world. In April, the fate of President Park Geun-hye will be determined. The aftermath is uncertain. We cannot know how deep the divide between her supporters and critics is and what it can lead to. Without leadership, small troubles can bring down a big economy.

I am glad talk of crisis has resurfaced. Alarms must sound for people to become vigilant. Goldman Sachs a few years back said that Korea was like a frog in a pot of slowly boiling water. A frog will jump out if it knows the water is suddenly hot, but not if it heats up slowly.

Looking straight into danger is what can save the Korean economy.