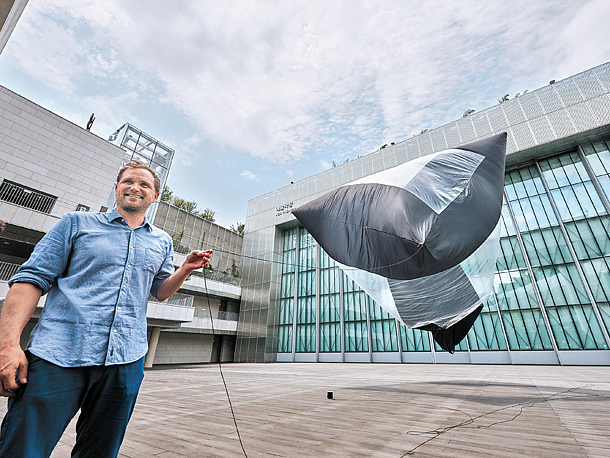 Artist Tomas Saraceno shows how his “Aerocene” can be inflated and lifted only by air and the sun without fossil fuels at the Asia Culture Center in Gwangju on Friday. [ASIA CULTURE CENTER]

GWANGJU - “I love the idea of flying in the air with your feet on the ground,” multidisciplinary Argentinian artist Tomas Saraceno said during an interview before the opening of his first Korean solo exhibition here in this southwestern city on July 14.

“Actually, we all fly. Planet Earth is a huge spaceship. And we must remember that we are not the only passengers on this spaceship. There are so many other species.”

Saraceno’s enigmatic remark reflects the concepts that underlie his oeuvre. It was his response to the question, “Why are so many of your works up in the air?” His mesmerizing pieces are now on display at “Our Interplanetary Bodies” which runs through March 25 at the Asia Culture Center in Gwangju.

Saraceno earned fame for his “Cloud Cities” project, a series of architectural installations based off long-term research about a transnational city in the air with modular habitats, and the “Aerocene” project, a series of experiments and research about vehicles that are similar to hot air balloons but move without any fossil fuels and only using air and solar energy.

The artist demonstrated the flight of one of the Aerocene sculptures before the exhibition opening. His assistants captured air in a huge plastic bag made of black and transparent vinyl by simply running around with the bag open. Then they closed the bag and waited for around 10 minutes. Soon, the bag began to ascend as the air inside was heated up by the summer sun of Gwangju. It became a real “floating, flexible sculpture” in the air, as Saraceno said.

“It’s so simple and elemental,” the artist said. “During the day, warm air heated by the sun keeps it up. During the night, the sculpture goes down closer to the surface of the earth but is kept in the air due to the warm air heated by infrared radiation from the surface. So it can keep going, while slowly moving up and down. A sculpture actually went from Berlin to Poland.”

Left: Tomas Saraceno’s “In Orbit”(2013) at the Kunstsammlung Nordrhein-Westfalen, K21 Standehaus, in Dusseldorf, Germany. Right: The artist’s “Aerocene 10.4 & 15.3” was displayed at the Grand Palais in Paris in 2015 during the UN COP21 Climate Summit. [TOMAS SARACENO]

Pointing to the Aerocene sculpture floating beyond the yard of the Asia Culture Center, he said, “If it were bigger, it would carry a person.” Later, he showed newspapers that he published with a picture of an Aerocene that actually carried a person in the air.

“Airplanes and other means of transportation under the fossil fuel regime travel from A to B points in a straight-line trajectory,” he said, “but the Aerocene, inflated only by air, lifted only by the sun, carried only by the wind, travels slowly in a wave orbit. That reflects sustainability.”

He also said the Aerocene invokes the concept of the shared economy. “The method of building it is open to the public on the website,” he said. ”Everybody can use it but cannot own it exclusively, like books in a library.”

Though simple the way Saraceno puts it, it’s never easy to actually invent a mechanism like the “Aerocene.” That’s why Saraceno collaborated with scientists at the Massachusetts Institute of Technology for the floating contraption, and with scientists and engineers in other major institutions around the world for other projects.

Like other artists, Saraceno has predecessors who inspired him such as the Archigram, an avant-garde architectural group based in London in the 1960s and the Russian utopian architects earlier in the 20th century. His “Cloud Cities” project might remind viewers of the audacious blueprint of “The Flying City” that consists of capsules floating in the air presented by Russian constructivist architect Georgy Krutikov in 1928.

“But Saraseno practices concrete projects through scientific collaboration for his ‘quasi-feasible utopia,’ unlike his predecessors who only presented their utopian visions,” said art historian Chung Yeon-shim, a professor of art theory at Hongik University.

Regarding the idea of a “quasi-feasible utopia,” the artist said in the interview, “I work while thinking about [French philosopher] Pierre-Felix Guattari’s theory of three ecologies - ecologies of mind, society and environment.”

Based on the thinking, the artist has attached importance to art and society’s engagement with each other, and the communication between them. “For me, it is quite a surprise that sometimes people deny climate change,” he said. “This means there’s urgency and responsibility for each discipline to start communication and rebuild a narrative in which we can all be participants.”

Saraceno has even had interest in the communication and coexistence of humans with other species in the greater context of the universe. The works now on view at “Our Interplanetary Bodies” are related to this.

The wide space of the center’s Complex 1 is currently dark, its floor and walls completely covered with black sheets. In the room are nine gigantic translucent spheres emitting subtle light. They are reminiscent of the spectacle of the universe. Walking between them, one can sense the feeling the artists describes of “floating in the air with your feet on the ground.” On one wall, there is a video projection of continuously changing abstract images, which reflects the real-time movement of illuminated cosmic dust particles in the air. The movement is also converted into sound art.

Also on display is a live Nephila spider spinning her web. The frequencies produced by the dust trajectories are delivered to the spider web through a transducer, and at the same time, the subtle vibrations of the cobweb reacting to the frequencies are taken and enlarged by a sensitive microphone. The movement of the dust is further activated by the sound, and the lively soundscape is further augmented by the movement and breath of visitors. In this way, humans, other Earthly creatures and the universe are linked.

“Both dust and spiders are what we commonly don’t want to have in our homes,” Saraceno said, smiling. “But in this work they will help us perceive very different worlds, turning familiar things not so familiar ... just like the eclipse of the moon by the earth’s shadow that suddenly leads us to feel the shape and presence of the place on which we live.”

“He shows we live nestled within an infinitely complex and interconnected cosmic web,” said Kim Sung-won, artistic director of ACC Creation. “Saraceno makes the phenomena of the mysterious universe sensible through an organic and poetic consilience of contemporary art and different disciplines.”