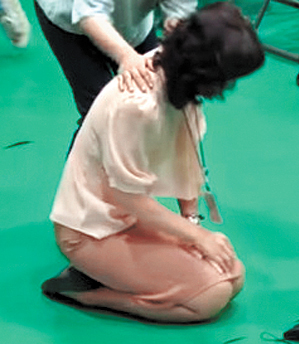 A mother of a girl with intellectual disability kneels in front of an angry crowd of Gangseo District residents on Sept. 5 during a local debate over the planned establishment of a school for children with disabilities. [JOONGANG PHOTO]

A video clip featuring parents of children with disabilities kneeling in front of their neighbors in Gangseo District and begging for their consent to build a school for students with special needs has sparked a national debate.

In the video, a woman who was later identified as the 46-year-old mother of a girl with an intellectual disability is seen kneeling in front of an angry crowd of Gangseo residents, only to be booed.

When other parents joined her, some shouted, “Stop putting up a show!” and “This has all been staged!”

Since 2013, residents in the western Seoul area have been in conflict over a plot of land after the Seoul Metropolitan Education Office announced that year it would establish a school there for people with physical disabilities.

Opponents, however, urged local authorities to set up an herbal medical hospital instead and a debate where both sides were supposed to meet to iron out their contrasting views was initially scheduled for July 6, but fell through when locals supporting the herbal hospital boycotted the meeting.

The debate was rescheduled for Sept. 5, when the kneeling occurred. A video of the scene was uploaded on YouTube last week and went viral. An online petition urging Seoul’s education office to push through with its original plan launched last Thursday, but the number of participants has not yet been revealed.

“The clock kept ticking without any progress,” Jang Min-hee, the 46-year-old mother, explained Thursday during an interview with the JoongAng Ilbo. “I wanted to show them how desperate I was. We didn’t do anything wrong, but I was willing to do anything if I could just prove my desire. That’s when I thought to myself, ‘Let’s kneel down.’”

Jang is affiliated with a nongovernmental group of Gangseo parents of children with disabilities. Her daughter graduated from an ordinary high school last February and is now receiving vocational training at a center for people with developmental disorders.

Jang’s daughter would not be eligible to enroll at the contested school due to her age, but that did not stop Jang from taking part.

“If people swear at me, I can take that. If they hit me, I can take that, too,” she said. “But none of the kneeling was planned. When I later asked other moms why they knelt with me, they said they felt they needed to be by my side. I would’ve felt exactly the same.”

Cho Hee-yeon, superintendent of the Seoul Metropolitan Office of Education, wrote Saturday on his Facebook page, “When it comes to educational administration, it’s necessary to consider the different, realistic positions of interested parties.” He continued, “That’s democracy, the administrative obligation of a public institute.”

He added, “In that sense, I understand the realistic points of view of several residents who oppose the establishment of a school for people with disabilities.

“Nevertheless, this isn’t a matter of concession. This isn’t something like a nuclear power plant or Thaad [Terminal High Altitude Area Defense]. A school for people with physical disabilities is a right to live.”