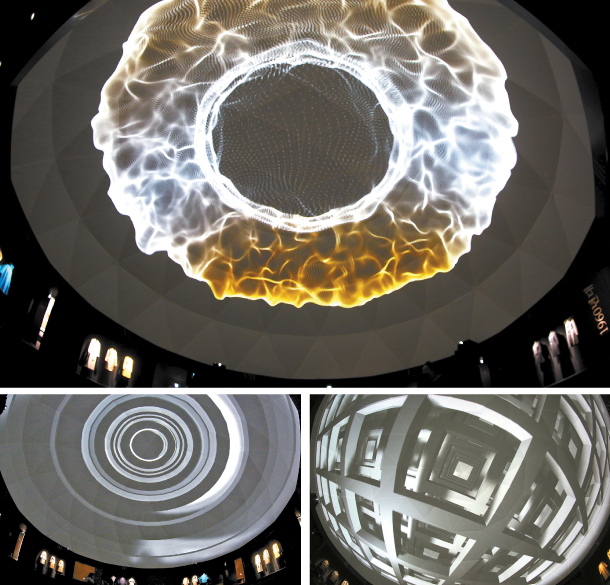 Several luxury fashion houses have held free exhibitions of their brand histories and art collaborations in Seoul in recent years.

The latest is Italian fashion house Max Mara’s show entitled “Coats!” which runs at the Dongdaemun Design Plaza in central Seoul until Tuesday.

As the title suggests, the exhibition focuses on the history of the house’s coats, in particular, its iconic camel-colored winter coats. The show might look simple compared to those of Louis Vuitton and Chanel held before, but it has its own attractions.

One of them is the unique exhibition spaces that consist of seven showrooms surrounding one circular hall with a dome. Inspired by Italian cities that have small piazzas that are surrounded by homes, Italian architect team Migliore & Servetto designed the space.

Another charm is a spectacular digital art piece projected onto that dome. Like its paradoxical title “Deep Surface,” the moving images of the work, by Korean artist Yiyun Kang, generate astonishing illusions of space through elaborate site-specific projection-mapping techniques.

The 28-minute art piece starts with ever-changing waves of golden particles that give off a cosmic quality. The artist said she was inspired by the famous camel color used in many Max Mara designs. Then, the illusion of an immense space divided by numerous grids appears. “This is my impression from Max Mara’s vast historical archive and other archives I have visited,” Kang said.

“From the grids of the archives, I saw the infinite layers of human history, which are breathing.” 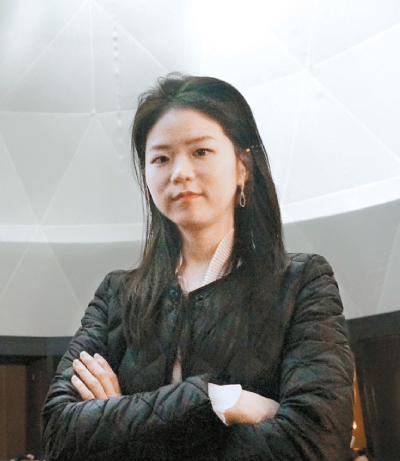 In the last part of the piece, people’s shadows appear to be dancing on the white dome. “Sometimes I hear viewers whisper that there seem to be real people beyond the dome,” the artist said, smiling.

“With the technology of spatial projection mapping, she transforms the existing architectural structures in a manner that collapses the borders between materiality and immateriality, between reality and virtuality and between presence and absence,” said Lee Dae-hyung, curator of the 2017 Venice Biennale’s Korean Pavilion and art director of Hyundai Motor. He curated this art collaboration project.

“It is said digital art, with mechanically reproducible qualities, has no ‘aura,’” Kang said. According to German philosopher Walter Benjamin, something has aura by having material existence and existing in only one place at a time.

“But my digital art can have aura since it is overlapped with architectural structures that have material existence and it has qualities of performance that occur only in one place at a time. I pursue digital aura.”

Admission is free but requires reservation at the Max Mara web site (https://kr.maxmara.com/coats-seoul).