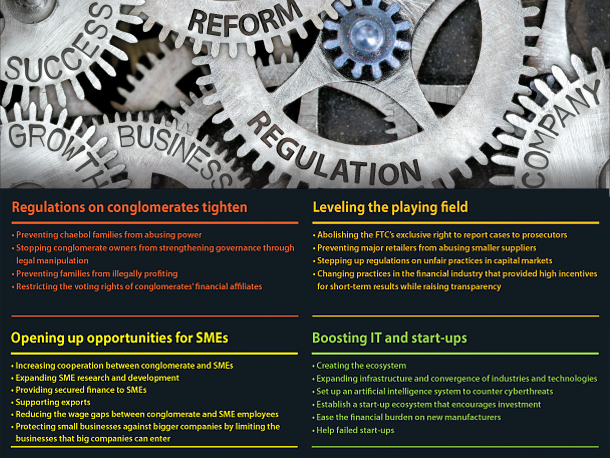 One year in, the administration of liberal President Moon Jae-in is doing battle with the Korean business status quo.

Correcting social inequalities, especially those related to gapjil, which translates to abuse of power, is on the top of the Moon’s government’s agenda. It has made it clear that it won’t tolerate big companies that exploit suppliers or the yawning wage gap between conglomerate employees and those at smaller businesses.

The new administration is focused on reforming Korea’s conglomerates and leveling the playing field.

The president vowed to step up government support for smaller companies through the Ministry of SMEs and Startups, which used to be a division under the Ministry of Trade, Industry and Energy.

“The launch of the Ministry of SMEs and Startups is a historical day that will change Korea’s economic policy paradigm,” Moon said at the launch of the new ministry on Nov. 30. “Until now, our economy has been led by conglomerates and key national industries. But today, our future can no longer be guaranteed by an economy that chaebol and big companies are at the center of.

“I believe that a people-centered economy can only be created when both income-led growth and innovative growth through the vitalization of small and medium-sized businesses (SME) happens,” Moon continued.

Korea’s economy has been synonymous with conglomerates since the 1960s, and despite numerous efforts to break them up, they have remained strong.

The combined assets of the country’s top 30 conglomerates, including Samsung Electronics and Hyundai Motor, was equivalent to 100 percent of the nation’s GDP in 2016, according to a study from the Economic Reform Research Institute. That’s double what it was nearly three decades ago, when they made up 55.3 percent of the country’s GDP.

Korea’s dependency on major conglomerates is obvious with a quick glance at export statistics. According to Statistics Korea and the Korea Customs Service’s study on trade released earlier this month, conglomerates account for 66 percent of the country’s exports, at $378.7 billion, while SME’s take up just 16.1 percent of the share, or $91.8 billion.

“Conglomerate exports have seen a sharp increase [last year], as semiconductors account for more than 50 percent of exports,” said Park Sang-young, a director at Statistics Korea.

Many Korean leaders have long believed that the growth of conglomerates translated to gains for the economy as a whole.

But recent studies have found that when large businesses profit, jobs don’t shoot up as much as expected.

In April, research firm CEO Score reported that the operating profits of 57 conglomerates last year rose 55 percent to 116.3 trillion won. However, hiring has only increased 1.8 percent, to slightly above 1 million new jobs.

The center of Moon’s so-called J-nomics policy is supplying quality jobs, which will increase spending and bolster the economy. Since more than 80 percent of Korea’s jobs are created at SMEs, the Moon government has decided to focus on expanding SME profits.

According to Innobiz, an SME association, smaller companies are Korea’s hidden champions. 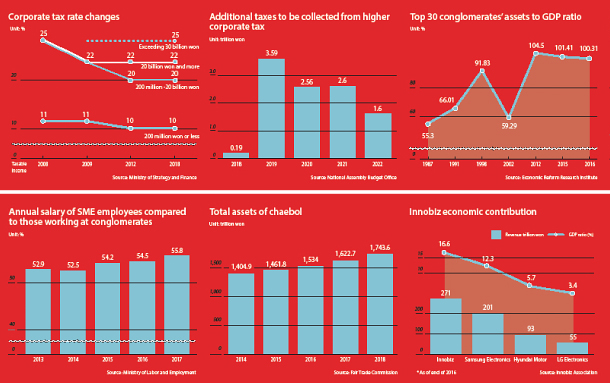 Chaebol in the sights

The government is taking steps to prevent conglomerates and other big companies from profiting off the sacrifices of SMEs. Conglomerates often force suppliers to lower their costs and send most of their work contracts to family-controlled affiliates.

The government’s actions are focused on limiting founding families from maintain influence across conglomerates through complicated cross-shareholding schemes. It also hopes to take on business malpractices by empowering SMEs as well as stakeholders.

Overhauling conglomerates’ corporate governance has been one of the government’s key priorities in recent years.

Korean conglomerates use cross-shareholding systems to control affiliates without having to own large stakes in them.

Unlike past governments, the Moon administration is trying to also tighten regulations on holding companies so that they will take greater responsibility in affiliates that they have a stake in.

These regulatory actions are expected to make it more difficult for chaebol families to expand their governance or even pass on their businesses to the next generation, as they will limit the loans that conglomerate families can borrow.

Conglomerates are also facing tougher regulations on their overseas operations, which were often overlooked in the past.

The government has also limited the voting rights of financial affiliates of conglomerates on key issues, such as mergers and acquisitions (M&A), to 3 percent.

This move follows the attempts by some chaebol families to use their stakes in financial companies to vote in favor of M&As that contribute to continued family control over the conglomerates.

These new regulations aren’t just limiting the power of chaebol families — they are empowering shareholders to hold conglomerate’s accountable for mismanagement.

Shareholders in chaebol holding companies can sue management if mismanagement of affiliates causes the value of their shares to drop.

The government is working on introducing an electronic voting system that will allow shareholders to exercise their voting rights if they can’t physically attend shareholder meetings.

Currently, many conglomerates hold their shareholder meetings on the same day, which prevents shareholders from being physically present at multiple meetings that decide key issues, such executive promotions.

The administration is also tightening on scrutiny of how conglomerates award their work contracts. It claims that giving commissions to affiliates isn’t a fair business practice and just increases chaebol profits.

Previously, for the government to investigate a company for excessive allocation of work to affiliates, the founding family had to have a great than 30 percent stake in the company. That has been lowered to 20 percent.

The government has also pushed bigger companies to give back to society by raising corporate taxes.

With the rise in corporate taxes, the government expects to collect more in revenue this year. The National Assembly Budget Office estimated added tax revenue from the 25 percent corporate tax, up from the previous 22 percent, will amount to over 11 trillion won over five years.

Tightening regulations aren’t the only changes taking place. The government is empowering SMEs to fight against abuse of power by big companies to make a fairer economy.

“The worsening structural gap in society grew, and the distorted relations due to gapjil started to have a negative side effect on society,” said Kwon Huk, a professor at Pusan National University. “The situation needed decisive measures.”

The Moon administration’s first new step was the Fair Trade Commission’s announcement that it will give up its exclusive right to report business malpractice cases to the prosecutor’s office.

Those opposed to the change argued that allowing more people to bring cases to prosecutors will lead to reckless lawsuits and harm businesses.

Fair Trade Commission (FTC) Chairman Kim Sang-jo, though, stressed the need to abolish the commission’s exclusive right on his first day on the job.

“The establishment of a fair market economy order goes beyond the new government’s national agenda, as it’s the reason for the FTC’s existence and the responsibility bestowed on the FTC,” Kim said.

The FTC chairman also encouraged local governments to crack down on business malpractice, stressing that due to limited human resources, the FTC alone will not be able to bring about a fairer economy.

The government is also preventing major retailers and companies from stopping suppliers from raising the costs of their products, a common practice it says is exploitative. Smaller businesses can now officially request bigger companies to pay them more for their products. Labor expenses for smaller companies have gone up after the government raised the minimum wage earlier this year.

The government has tightened its investigation into price gouging by large franchises, which often force franchisees to purchase products at inflated prices from designated suppliers.

The FTC can now levy penalty fines against bigger companies if they’re found to have exploited SMEs.

Smaller companies are also getting new protections for technologies they develop jointly with conglomerates.

Financial authorities are promoting a fairer economy by publicizing the penalties issued by the Securities and Futures Commission against financial businesses and toughening the penalties it is giving to stock market manipulators.

The Financial Supervisory Service has reduced the time period between government audits of companies from 25 to 10 years. It also increased the prison sentence for accounting fraud from between five and seven years to 10 years and eliminated the maximum fine for the crime, which used to be 2 billion won.

To prevent major investors from seeking short-term gain, the government will also review the qualifications of the largest stakeholders in nonbanking financial companies.

Small businesses get a boost

While the government is toughening its approach to conglomerates, it has raised its support for SMEs.

It is expanding cooperation between conglomerates and SMEs in hopes of creating a business model where profits are equally shared. It hopes to get 200 companies to adopt shared profit agreements by 2020.

It also plans to double its budget support for smaller businesses’ R&D while creating a system that will allow SMEs to branch out overseas and launch online export platforms.

One of the government’s biggest plans is reducing the wage gap between SMEs and conglomerates by offering financial support on SMEs to help them hire more talent.

The Moon government said the move will spur inclusive growth.

The recently-passed supplementary budget at the National Assembly is also aimed with empowering SMEs. The wide wage gap between those working at big companies and SMEs is considered the key reason why many talented young jobseekers have avoided applying for positions at smaller companies.

According to the Ministry of Labor and Employment, the annual salary of an SME employee is equivalent to 55 percent of a conglomerate worker’s on average.

The government is also raising its support for the self-employed, such as convenience store and restaurant owners.

It plans to lower the charges that businesses have to pay to accept credit cards in 2019, which is a major cost for small retail and food businesses. The Moon administration also plans to provide tax breaks on medical expenses and tuition and limit landlords’ ability to raise rents. The cost of rent has become a major issue, as even popular restaurants and bars often have to close or relocate due to skyrocketing rent.

The government plans to expand the period that conglomerates will be barred from selling 47 goods, such as the popular street foods tteokbokki (spicy rice cakes) and sundae (blood sausage) to 2020. It will also limit the amount of days that shopping malls can stay open each month.

IT and tech are the focus

“A fair economy is an economy where all companies compete under fair opportunities and rules,” said Lee Ki-won, an assistant manager at the Small and Medium Business Corporation. “The government is actively supporting innovative start-ups by setting aside 779.6 billion won in support.”

This financial support, however, is limited to companies that have been founded less than seven years ago.

The government said that its policies are focused on creating an IT-friendly ecosystem, including 5G network infrastructure, public access to data and using artificial intelligence to protect against security threats.

Its financial support includes revisions to the investment stimulation law to encourage angel investment in startups. Start-ups can also look forward to exemptions of carbon emission and waste disposal taxes, in addition to delays on their tax bills until they turn a profit.

Hulya Ulku, a senior economist at the Development Economics Vice Presidency at the World Bank, said that though deregulation is important, implementing smart regulations is just as crucial.

“People misunderstand [regulations],” said Ulku. “Regulations in an ideal world are there to enable the business environment.”