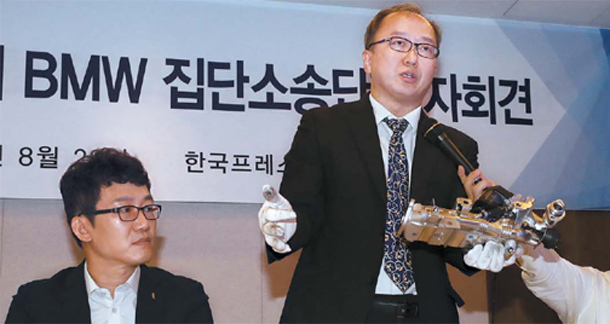 Park Seong-ji, a professor at Daejeon Health Institute of Technology, center, explains the basics of the emission gas recirculation module at a press conference held by the Korea Consumer Association on Tuesday in central Seoul. [YONHAP]

An investigation by the Korea Consumer Association (KCA) concluded that the spate of BMW fires that left Korea in a state of panic over the summer was the fault of the engine control unit (ECU) software, not the hardware issue that the German carmaker has maintained.

The KCA claim that BMW updated the ECU software to make an engine part, called the bypass valve, open at higher temperatures, leading to higher engine performance and better fuel efficiency but also to a higher risk of fire.

“An update in the ECU to enhance the car’s performance and fuel efficiency is not wrong by itself,” said Lee Ho-geun, an automotive engineering professor at Daeduk University who is leading the investigation team at the KCA, at a press briefing Tuesday.

“But the fact that the carmaker didn’t fortify other parts to make them endure higher temperatures, leading to engine fires which put consumers’ lives at risk, is wrong,” Lee added.

The KCA’s investigative team comprising of experts in the auto industry and law carried out a separate investigation into two BMW vehicles manufactured before August 2011 that are not subject to recalls and four recall-subjected cars.

According to Lee, a bypass valve in a diesel engine is generally supposed to be closed in order to block gas that’s hotter than 500 degrees Celsius (932 degrees Fahrenheit) from entering the intake manifold in the engine. It usually opens when the coolant’s temperature is lower than 50 to 60 degrees Celsius.

“Bypass valve operation is controlled by the ECU,” said Lee. “If a vehicle opens the bypass valve while driving - causing a high possibility of a fire breaking out - it means BMW set the software to behave that way.”

BMW Korea has persistently claimed that the cause of the fire is a hardware issue in the exhaust gas recirculation (EGR) cooler and valve. The ongoing recall process also includes replacing the two parts and cleaning the EGR pipe.

The KCA investigative team said it is nothing but a temporary fix.

“It will reduce the number of fires until the car gets that much accumulated sediment inside the pipe,” said Choi Younh-suk, a professor of smart automotive engineering at Sun Moon University at the briefing.

According to Koo Bon-seung, an attorney at Heon Law, who is in charge of handling legal issues for the team, a total of 1,784 BMW owners have applied for a class-action lawsuit against BMW with Heon.

“As this case involves compensation worth 15 billion won in total, we are going to seek the provisional attachment of BMW Korea headquarters in central Seoul as well as the BMW Driving Center in Incheon and other logistics centers as well,” Koo said.

Meanwhile, BMW Korea Chairman Kim Hyo-joon said he will look into the option of suspending sales of affected cars in Korea at a hearing held at the National Assembly on Tuesday.

Kim said he feels shame for selling such defective vehicles in Korea and said he will take responsibility.

Kim reiterated that the issue derives from a defect in the vehicles and not from the driving habits of Korean consumers.

Earlier this month, BMW spokesman Jochen Frey came under fire for blaming Korean driving habits and traffic conditions for the fires in an interview with Chinese media. BMW Korea instantly refuted the comment, saying it was a translation error.