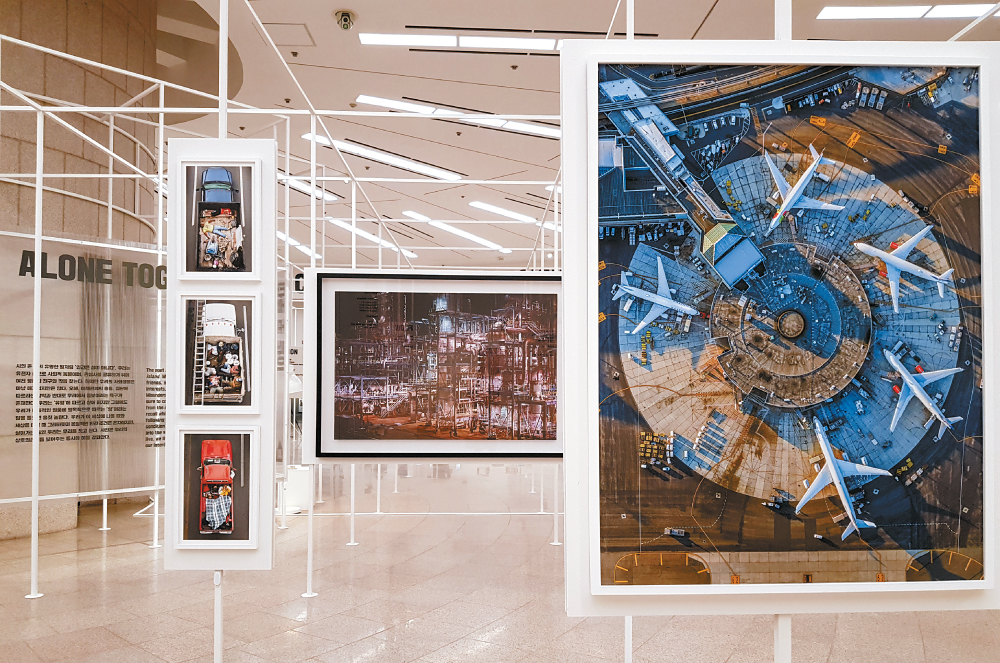 The large-scale international photography exhibition “Civilization: The Way We Live Now” runs through Feb. 17 at the MMCA Gwacheon in Gyeonggi.[MOON SO-YOUNG]

GWACHEON, Gyeonggi - The circular Gallery 1 at the National Museum of Modern and Contemporary Art (MMCA) in Gwacheon, Gyeonggi is filled with photographs hanging not only on the walls but also on stands in the center of the space, through which the viewers can walk and discover the similarities or dramatic contrasts that the striking photos show.

The photos range from a scene of a Chinese chicken processing factory filled with laborers clad in pink, captured by Canadian artist Edward Burtynsky, to an ironic scene captured in Greenland of tourists engrossed in taking photos of stained glaciers, captured by German artist Olaf Otto Becker.

Among the photos are also the elegantly intricate structures of gigantic plants and airports captured by Christoph Gielen of Germany, Jo Choonman of Korea and others while there are creepily pretty shapes of mines captured by French artist Raphael Dallaporta.

All of these images are part of contemporary life and are part of the new international photography exhibition titled “Civilization: The Way We Live Now,” which started late last month. The show seems to challenge the iconic 1955 photography exhibition “Family of Man” curated by Edward Steichen, in its large scale, elaborate installation and ambitious attempt to help answer the question of where humanity stands and where it is going. 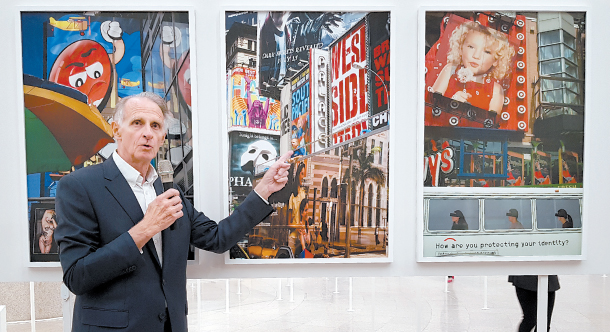 Curated by William Ewing, 74, a renowned photography writer and curator, and Holly Roussell, a young art historian and curator specializing in Asian photography and art, the exhibition, featuring over 300 works by 135 artists from 43 countries, looks at civilization in the 21st-century, which stands at the crossroads of evolution to either a new level or self-extinction, in a less optimistic way than the “Family of Man” show did.

During a press preview on Oct. 17, Ewing said, quoting futurist James Martin, “This is the first century in which Homo Sapiens could be terminated.” But he also added that “better communications and better collaborations” are positive addition to civilization.

Asked in a brief interview with the Korea JoongAng Daily about whether this exhibition considered “Family of Man,” Ewing said, “Yes, our exhibit has actually 500 individual pieces of photography [although the MMCA said the show has 300 works, because some pieces are grouped as one work]. And “Family of Man” also had 500 pieces. But the ‘Family of Man’ exhibition, made after World War II, had a very positive vision of humanity. Steiken, the curator, had a certain message about that. I don’t have the same message. My message is just this: this is what the photographers are doing and this is what they are showing about the civilization.”

Ewing also said, “We don’t intend to be positive or negative [about the current civilization] with this exhibition. It might be a little bit positive but it is realistic.”

As he described, the exhibition is neither a dark apocalypse nor a happy hymn to humans. The photos on view show the light and darkness of the 21st century and even phenomena, about which viewers cannot immediately discern whether it is light or darkness, but understand that it is impacting their life.

“We contacted individual artists, explaining the theme of the exhibition, and many times the artists didn’t only provide their own works but also recommended other artists’ works in relation with the themes,” Ewing said.

The exhibition is divided into eight sections. The section “Hive” reflects on organic urban development and expansions led by man. The section smoothly transitions into the adjacent section “Flow,” which traces the flows of capital, oil, manufactured goods and others, as well as the hardware that makes these flows such as conveyor belts, roads, ports and vehicles.

The section “Alone Together” observes relationships among humans who are by nature social animals. In this section, American artist Dona Schwartz outlines common junctures in contemporary families through the sequel series “On the Nest: Expecting” and “On the Nest: Empty Nester.” Yeondoo Jung’s “Evergreen Tower” series, which portrays 31 pictures of families in their living rooms with similar-looking furniture, share common points with Schwartz’s works - the composition of the image and family as the subject. But the work has different angles and focuses, such as the standardized lives of Korean families and the apartment culture that reinforces this standardization.

The section “Persuasion” looks into the means of persuasion developed through advertisement, propaganda and marketing. The section “Control,” explores the ways in which authoritative institutions exercise their power. The section “Rupture” discusses societal collapses and conflicts. 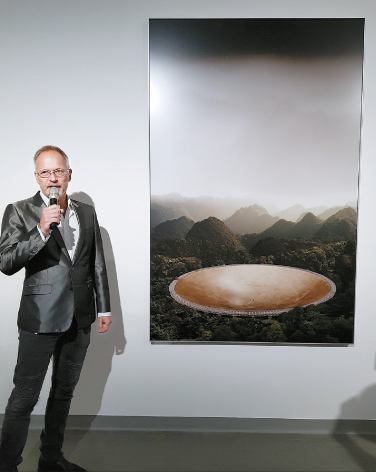 The section “Escape” including Olaf Otto Becker’s photo of Greenland, captures people enjoying nature and history as consumer products, and the works in the section “Next” including Michael Najjar’s “f.a.s.t.” looks at the newly developing world of the 21st century.

The photos in each section could easily be a part of other sections due to their multifaceted aspects and layered meanings. Accordingly, the sections are smoothly connected to each other and despite the broad theme of “Civilization,” the exhibition gives no impression of being unfocused or superficial.

As a co-production of the MMCA and the Foundation for the Exhibition of Photography, the exhibition will tour 10 foreign museums including the Ullens Center for Contemporary Art in Beijing (March 2019); the National Gallery of Victoria in Melbourne, Australia (September 2020); and the Museum of European and Mediterranean Civilizations in Marseille, France (January 2021).