[Iconic Food] Korea’s favorite lunch boxes are back and better than ever: Dosirak now offer more than a quick bite for hungry students

[Iconic Food] Korea’s favorite lunch boxes are back and better than ever: Dosirak now offer more than a quick bite for hungry students 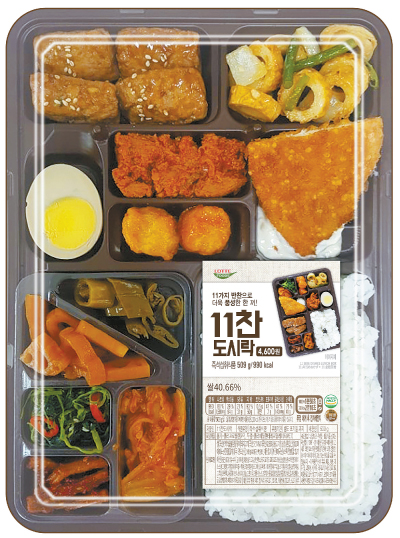 Some dosirak, or lunch boxes, available at local convenience stores. To cater to people with different tastes, some company’s have come up with meat-heavy options that target people that don’t want to eat a meal without any meat. Other manufacturers have introduced low-calorie options for diners watching their diet. [YONHAP, JOONGANG PHOTO]

A bowl of steaming rice served alongside spicy hot soup on a table laden with side dishes has long since been the way that most Koreans dremt of spending their lunchbreak. Just a decade ago, office workers digging into a lunch fit for a king looked down with pity on anyone who didn’t have the time or money to enjoy a hot meal. A prepackaged cold meal from a store, after all, is hardly a proper lunch for a hardworking Korean.

But those days have passed. Younger consumers and people seeking to economize with their time and money are now intentionally turning to dosirak - or pre-packaged lunch boxes - mostly from convenience stores. Some even go for the option because they taste good: many dosirak makers are now investing time and effort into coming up with unique dishes to attract single diners looking to find tasty yet affordable options.

Dosirak used to be something that only students, not adults, would carry around. Before the school lunch system began in the late 1990s, students always carried their lunch boxes with them. Those who wanted to eat warm rice and banchan, or side dishes, always carried a thermal lunch box. Trendier children might opt for plastic in order to show off their favorite animated characters. Even though the official lunch time started around noon, many adults today will remember sneekily eating their lunch early as they came hungry to school without eating breakfast.

Even before the widespread use of thermal boxes, many people used steel containers and a heater located inside each classroom as an oven to keep their food warm. At the time, eggs and sausages were more expensive and a luxury item for the hungry student. Those steel boxes, half filled with rice and half with kimchi, egg and sausage, are now back in vogue at Korean barbecue joints and other restaurants.

Lunch boxes started to fade away from most people’s daily lives in the early 2000s as an increasing number of restaurants served casual and inexpensive food, but the demand for dosirak has since bounced back. Many people in one- or two-person households prefer to eat out or bring home a packaged meal to minimize food waste.

The affordable price of a pre-packaged dosirak, which is normally around 5,000 won ($4.42) with rice and at least five different types of banchan, is also attractive considering that a single gimbap, or seaweed rice roll, is about 4,000 to 5,000 won with either tuna or some meat in it. According to a Neilson Korea survey released in June, people in single-person households eat pre-cooked meals about 3.1 times a week. 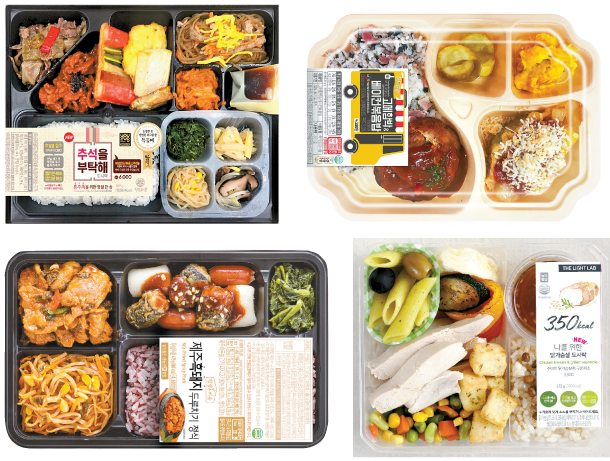 To stand out from the crowd, different convenience stores have introduced their own unique dosirak. Every fall, GS Retail uses freshly harvested rice in its packaged dosirak. The company used over 22 million tons of rice to make their food items, including dosirak and other rice balls, last year, up from 16 million tons in 2016. 7Eleven does the same to make their rice as fresh as possible. Some companies have introduced intentionally meat-heavy meal boxes for those who say they cannot eat a meal without some meat, while there are also low-calorie options for those who want to watch their diet. A package with 11 different banchan is also available for those who care more about diversity in their meal.

Some convenience stores even make special meals for national holidays for people who don’t have time to visit family for some holiday special food. As traditional style delicacies take time to prepare and cook, convenience stores have started to include them in lunch boxes. Soup, banchan and even desserts are made with seasonal ingredients so that diners can get the ultimate holiday experience without having to deal with lots of food waste after hours of exhausting cooking.

The dosirak game is big business, and even celebrities lend their name to different products, sometimes with disastrous affects. Singer Kim Chang-ryul of DJ D.O.C actually changed his name to Chang-yeol, as too many people started to use his name to refer to something that does not live up to their expectations or its price.

Kim was a model for a dosirak company back in 2009. The lunch boxes were sold at convenience stores nationwide, but were not exactly well received. Disgruntled shoppers began to use his name to refer to something disatisfactory, a reference to the difference between the dosirak he ate in commercials and the ones they bought in the stores. In 2015, Kim even filed a suit against the company, but failed to convince the court that his image had been defamed. Ultimately, he changed his name to avoid the association.

While Kim Chang-yeol’s dosirak experience left him with a bad taste in his mouth, veteran actor Kim Hye-ja had a completely different time, as the dosirak she modeled was well received by diners and is considered good value. Her name has even been used to indicate something that surpasses somebody’s expectations.